The LG G8 ThinQ (and to an extent the LG V50 ThinQ 5G) came as no great surprise today. That’s because LG, as it historically has with headlining devices, strategically spilled the beans ahead of its press conference this week at Mobile World Congress in Barcelona. However, that’s not to suggest either device underwhelmed — quite the opposite. LG’s new G series and V series flagships pack top-of-the-line internals that match the competition blow for blow.

The G8 ThinQ looks a lot like the G7 ThinQ from the outside, down to the glossy surface that shines like a freshly waxed car. It’s 151.9 millimeters tall, 71.8 millimeters wide, and 8.4 millimeters thick — nearly identical in size to the G7, which measures 153.2 millimeters x 71.9 millimeters x 7.9 millimeters — and it’s just as durable. LG says it is IP68-certified to resist water for up to 30 minutes at a depth of five feet, and rated MIL-STD-810G, meaning it’s been drop-tested from about shoulder height on rough surfaces (like concrete).

The G8’s 19.5:9 aspect ratio, 6.1-inch screen is of the OLED variety — a break from convention for G series phones, which in the past have featured LCD panels — and has a resolution of 3120 x 1440 pixels (564 pixels per inch) and a maximum brightness of around 600 nits (equal to 600 candelas, or the amount of light emitted by a common tallow candle per square meter). That won’t smash records, and it’s a step down in some respects from the G7’s MLCD+ 3120 x 1440 screen, which could reach 700 nits at peak brightness or up to 1,000 nits for three minutes at a time. But on the plus side, the G8’s display has an AI engine that can automatically switch between color profiles depending on what’s being displayed on-screen, and the ability to play back high dynamic range (HDR) TV shows and movies in the HDR10 standard. 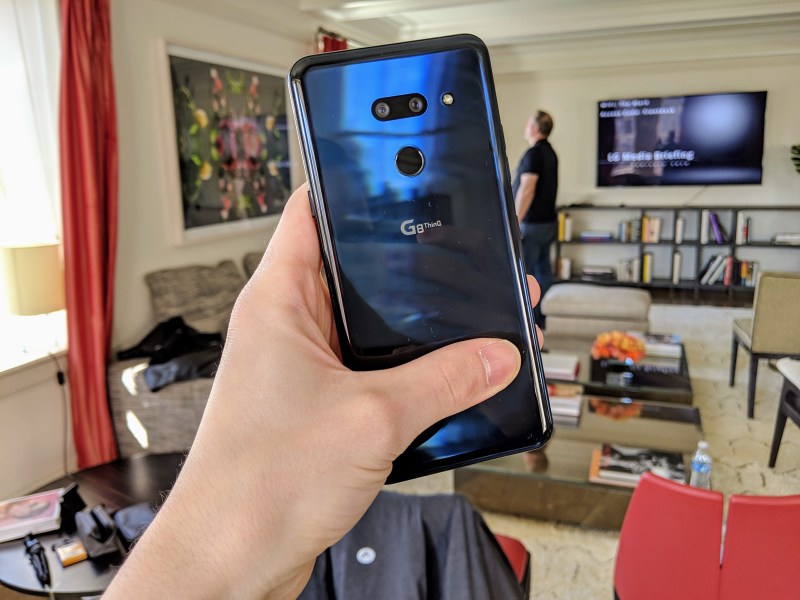 Above: The LG G8 ThinQ, from the rear.

Moreover, it boasts what LG’s calling Crystal Sound: tiny actuators that vibrate the surface of the glass to produce audio. In tandem with a bottom-firing Boombox Speaker — a carryover from the G7 that leverages the space between the rear cover and speaker to “increase the base sound level” — LG claims the G8’s capable of delivering stereo audio with “improved clarity” compared to traditional loudspeakers.

That’s not all that’s noteworthy on the audio front. Like the G7 before it, the G8 packs a Hi-Fi Quad digital-to-audio converter (DAC) that taps an amplifier and proprietary algorithms to enhance the sound quality of videos, songs, and podcasts by widening the dynamic range and boosting the bass. It additionally supports DTS:X 3D Surround Sound technology, which emulates a 7.1-channel system with or without earphones; Master Quality Authenticated (MQA) for high-quality, lossy audio compression from supported apps like Tidal and Deezer; and Qualcomm’s AptX and AptX HD tech for low-latency streaming over Bluetooth.

On the front of the G8 there’s an 8-megapixel camera (f/1.7 aperture, 1.22-micrometer sensor size, 80-degree field of view) that LG says can measure the distance between subjects in millimeters (up to 256 levels) and which has a faster autofocus than the prior generation. Abutting it is something really unusual: an infrared time-of-flight (ToF) sensor LG’s calling Z Camera. 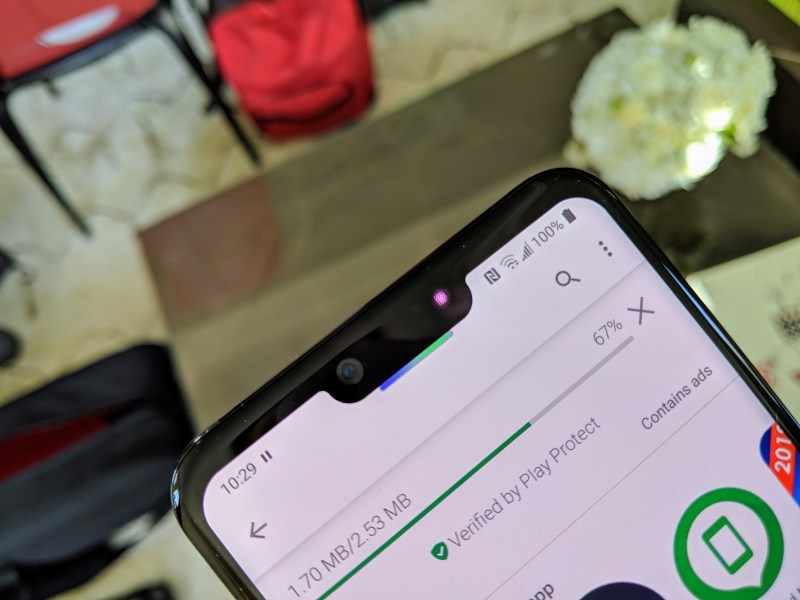 Above: The LG G8 ThinQ’s time-of-flight sensor. (It’s to the right of the front-facing camera.)

For folks who are unaware, time-of-flight cameras are ranged-based imaging systems that resolve distance based on the speed of light, measuring the time it takes for photons to pass between the sensor and a subject. Microsoft’s Project Kinect for Azure uses time-of-flight sensors to track movement, as does Anki’s Vector robot.

In the G8, LG’s leveraging the feature for Hand ID. Yep, you read that right — it’s like Apple’s Face ID, but for palms rather than foreheads. It reflects the IR lasers off the hemoglobin in the veins in your hand, and uses that info to build a vein map that’s unique to you. In a demo with members of the press ahead of today’s launch event, an LG rep demonstrated the hand-scanning process, during which a ToF sensor records the shape, thickness, and other characteristics of a hand for biometric authentication. Simply holding your hand relatively close to the sensor — but not too close — kickstarts authentication, which LG says takes less than a second, on average.

It sounds easy enough on paper and could theoretically be superior to facial recognition. Unlike a typical camera sensor, the G8’s Z Camera can render objects in three dimensions and isn’t affected by changes in ambient light. But in the brief time we spent testing Hand ID, it seemed too easily thrown off by quick movements — it took several attempts before the G8 recognized our scanned hand.

Above: Air Command on the LG G8 ThinQ.

In contrast, Z Camera’s other spotlight feature — Air Motion, a suite of gestures you can use to answer and end calls, snap screenshots, and switch between apps — seemed to work quite well. Our favorite was the volume adjustment shortcut: When audio’s playing, sticking your palm in front of the Z Camera while making a pinching motion with your fingers brings up an on-screen volume adjustment knob. Rotating your wrist to the right increases the volume, and rotating it to the left decreases it.

It’s a 7-nanometer eight-core chip that’s up to 45 percent faster overall than the silicon in the G7 (the Snapdragon 845) thanks to a 64-bit Arm Cortex design based on Qualcomm’s in-house Kryo 485 processor. Four cores handle the heavy lifting — one prime core clocked in at 2.84GHz and three performance cores at 2.42GHz — while four efficiency cores running at 1.8GHz juggle less performance-intensive tasks. Meanwhile, the Snapdragon 855’s graphics chip — the Adreno 640 — is 20 percent faster than the Snapdragon 845’s Adreno 630 and supports HDR (along with APIs like Vulkan 1.1) and custom algorithms designed to reduce dropped frames by over 90 percent. 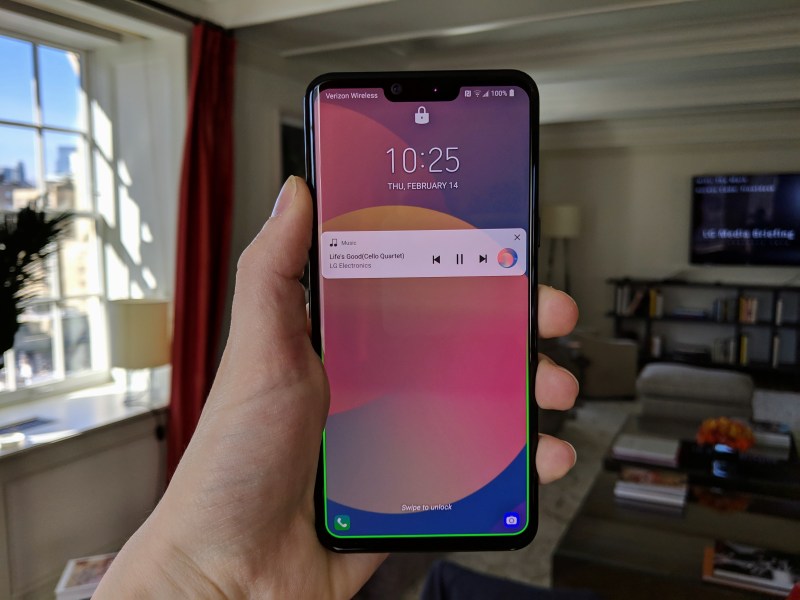 LG has paired the SoC with 6GB of RAM and 128GB of storage, the latter of which is expandable up to 2TB via microSD. And the company managed to squeeze in a 3,500mAh battery, up from the G7’s 3,000mAh — one that can recharge up to 50 percent in 15 minutes courtesy of Qualcomm’s Quick Charge 3.0 rapid charging tech. Rounding out the internals are a wireless chip with support for FM radio, 802.11a/b/g/n/ac W-Fi, Bluetooth 5.0, and NFC; a USB Type-C port (compatible with USB 3.1); and a capacitive fingerprint sensor (positioned beneath the rear cameras).

Like the V40 and G7, the G8 has a dedicated key that launches Google Assistant, Google’s eponymous intelligent voice assistant, from anywhere. (Alternatively, the G8’s far-field microphones can pick up voice commands shouted in its general direction from a distance.) LG worked with Google on custom commands for ThinQ devices like the G8 — commands such as “OK Google, take a picture on a wide angle” and “OK Google, open camera on Cine Video.”

The LG G8 ThinQ will ship with Android 9.0 Pie in three colors — red, black, and gray — “in the coming weeks.” Pricing has yet to be announced.

Another variant of the ThinQ G8 — the LG G8s ThinQ — will be available in select international markets. There’s no word yet on price point, as with the G8 proper, but LG revealed the key specs at today’s press conference.

The G8s will sport a 6.2-inch, 18.7:9 aspect ratio OLED that’s 2248 x 1080 pixels in resolution, and a Snapdragon 855 system-on-chip paired with 6GB of RAM, a 3,550mAh battery, and 64GB or 128GB of storage. It’s got a triple-sensor rear camera comprising a 13-megapixel wide-angle sensor and two 12-megapixel sensors — one standard and the other telephoto — and an 8-megapixel front-facing camera and ToF sensor.

Not content to unveil one flagship phone, LG had a second reveal for the V40’s successor: the V50 ThinQ 5G. It’s the first 5G phone in the company’s roster, and when it launches in black in the next few months it’ll tap Sprint and another, as-yet-unannounced carrier for service in the U.S. 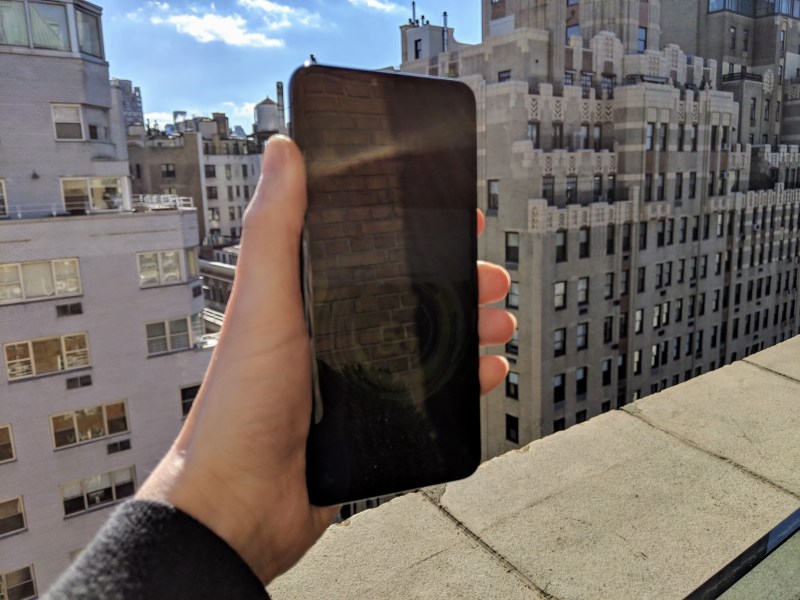 The V50 has the same Video Portrait feature as the G8 and inherits the V40’s and G7’s AI Cam. Among other commonalities are the Hi-Fi Quad DAC, stereo “Boombox” speakers, support for DTS:X and AptX, far-field microphones, a rear-mounted capacitive fingerprint sensor, FM Radio, 802.11a/b/g/n/ac Wi-Fi and Bluetooth 5.0 compatibility, NFC, one-tap access to the Google Assistant, and a USB Type-C port. 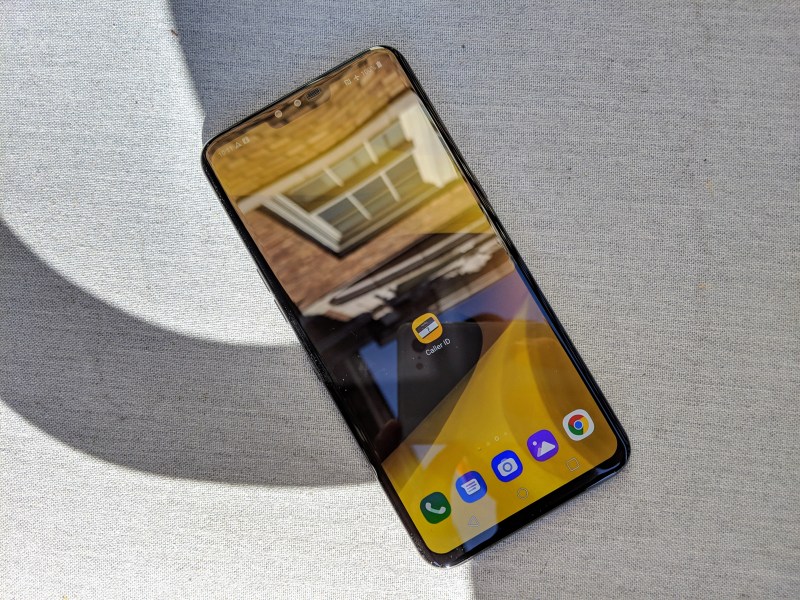 All the similarities aside, though, the V50 isn’t a perfect carbon copy of the V40. For one thing, the Quick Charge 3.0-compatible battery’s been upgraded from 3,300mAh to 4,000mAh (presumably to leave headroom for the power-hungry 5G radios), and the processor’s been swapped for a Snapdragon 855 (cooled with a new heat-dissipating vapor chamber system) and paired with 6GB of RAM and 128GB of storage (expandable up to 2TB via microSD). 5G connectivity’s made possible by Qualcomm’s Snapdragon X50 5G modem and antenna modules with integrated RF transceiver, RF front-end, and antenna elements. 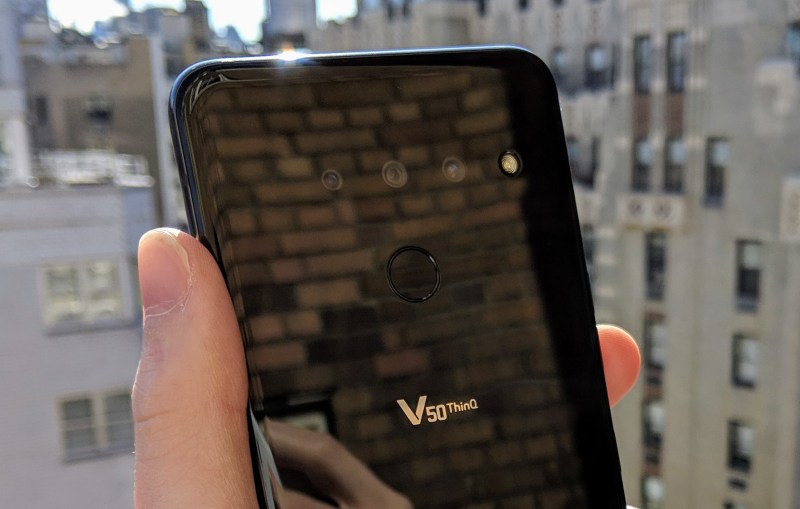 Above: The LG ThinQ 5G from the rear.

Then there’s Dual Screen, a somewhat bizarre accessory for the V50 that adds an inward-facing secondary 6.2-inch, 2160 x 1080-pixel OLED panel to the front cover. It snaps on via a power-transmitting pogo pin, and when it’s attached (either at 104 degrees or 180 degrees), an icon appears on V50’s primary display that powers it on and divides each of the screens in two. LG says it uses a proprietary short-range, high-bandwidth Wi-Fi chipset to transmit data between the V50 and the extra panel. 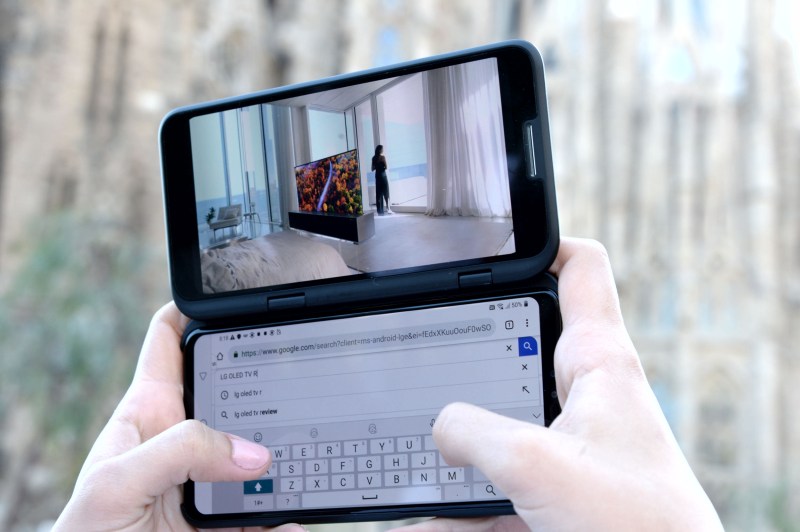 Above: The LG V50 ThinQ with the Dual Screen attachment.

LG says Dual Screen won’t be available in the U.S. — and will only be available in certain global markets. As is the case with the G8, we’re still waiting on pricing info from LG. We’ll update this post when we have it.