After my first spin with a tech-laden BMW X5 xDrive40i sport utility vehicle, I dove into driving two more tech-heavy cars: the Jaguar I-Pace and the BMW i3s.

Electric cars are able to deliver us to our destination without reliance on fossil fuels, thanks to great technology. But how much tech is embedded in the cars themselves? I don’t usually review cars for a living. But when I came back from the CES 2019 tech trade show in January I figured it would make sense to start, since companies are packing so much technology into these vehicles.

Driving the two cars for under a week was a big jolt to my system, as I’m used to 10-year-old cars — or older. And comparisons between the test cars themselves have to take into account the fact that the Jaguar has a base price of $69,500, while the BMW is just $47,500. But the differences give you a good idea of the current spread between electric cars. And the amount of tech you get in vehicles like these is eye-opening. 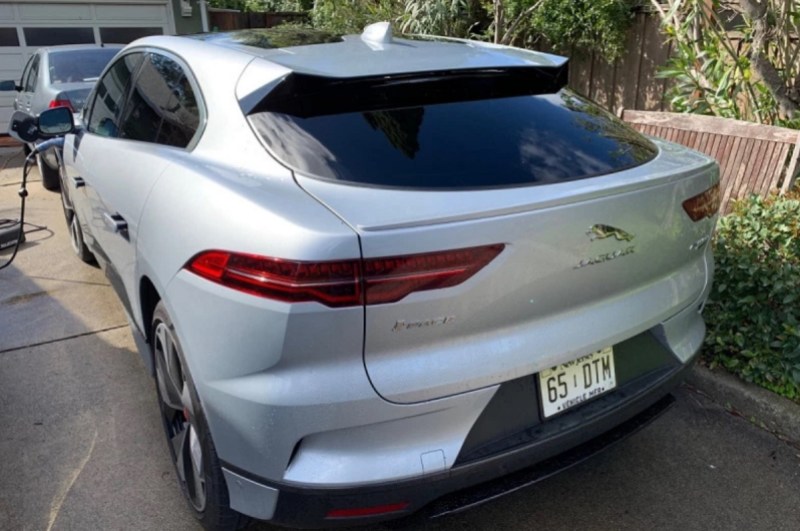 Above: The Jaguar I-Pace has a range of 292 miles.

The Jaguar model is the company’s first electric vehicle, and it looks great for a sedan. Jaguar actually calls it an SUV, but it sure looks like a sedan. It is zippy, going from zero to 60 in 4.5 seconds. It also has in-vehicle connectivity that allows it to update the car’s software over the air, as needed. I guess that means they can ship it with bugs and fix them later.

When you hit the “unlock” button on the remote, the door handles robotically move out from the surface of the side panels. That makes it feel like you’re getting into an Iron Man suit. When you lock the doors, the handles go flush with the siding. The Jaguar also has some pretty cool tires with see-through hub-caps that show the brakes.

While it certainly looks cool, there are some tradeoffs, like the tiny trunk in front where you would normally find an internal combustion engine.

The engine is quite powerful, and I never really felt that I was driving an electric car. You can cruise slowly without the car losing its charge. And if you go fast, you don’t hear an engine wheeze, so it doesn’t feel like the car is struggling. 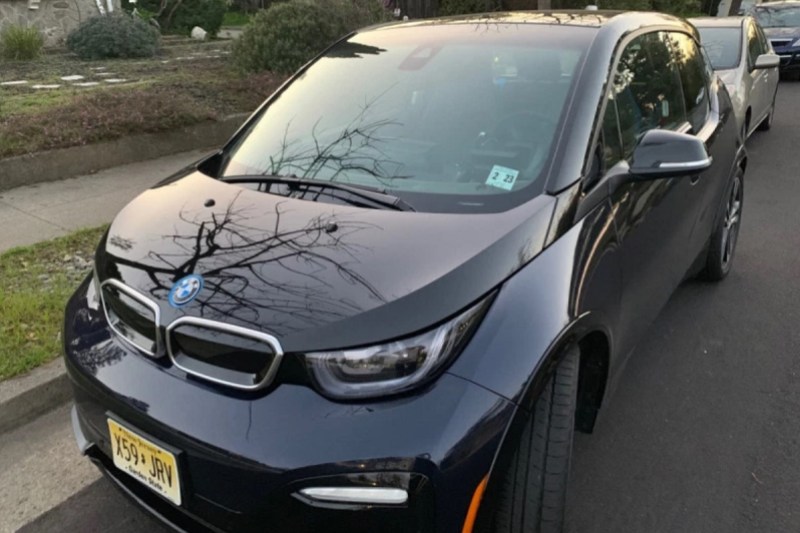 By contrast, the BMW doesn’t put on a show when you unlock the car. Both cars have keyless ignition. You don’t have to put a key in a starter because that’s so old-fashioned. Instead, you put your foot on the brake and press the “start” button.

The i3s can get from zero to 60 miles per hour in 6.8 seconds. While it is slower than the Jaguar, I didn’t feel it was lacking in acceleration or ability to pass other cars on the highway.

When you get in the car, the key fob and the Bluetooth connection on your smartphone will tell the I-Pace who you are. It will then use the “smart settings” technology to recognize the driver and adjust to your favorite settings for the seat, entertainment, and climate control.

The Jaguar has a 10-inch HD screen and a lower 5-inch HD screen for your information and entertainment. That lets you use the map navigation on the big screen and adjust multimedia controls on the smaller screen. You can view the nav map in 2D or 3D. The map will show you charging stations along your path, and it can reveal the available parking garages nearest your destination.

You can create a 4G hotspot within the car to make sure you’re always connected. And the car has voice control so you can change the radio station or make a phone call with your voice.

Both Apple CarPlay and Android Auto are available as standard features. Once I connected to the hotspot, the Apple Car Play feature let me see what was on my iPhone via the car’s display. So when I powered up Waze on my iPhone, the directions showed up on the car display. You can touch icons on the screen to control things like maps, messages, and music. Of course, you can’t mess around with a lot of this stuff while you’re moving.

But Jaguar created a new Amazon Alexa Skill, which allows I-Pace owners to use voice to access information held in the Jaguar InControl Remote app from any Alexa-enabled device. The car can sync with the Jaguar Land Rover Route Planner app, a multi-mode smartphone travel app that lets you plan journeys that include driving, walking, and public transport. I didn’t try this feature out.

The car has six USB slots so you can charge your various devices. If you want to preheat the car, you can use your remote vehicle app to do so. The cabin is quiet because the windows have acoustic laminated glass to keep out the noise. 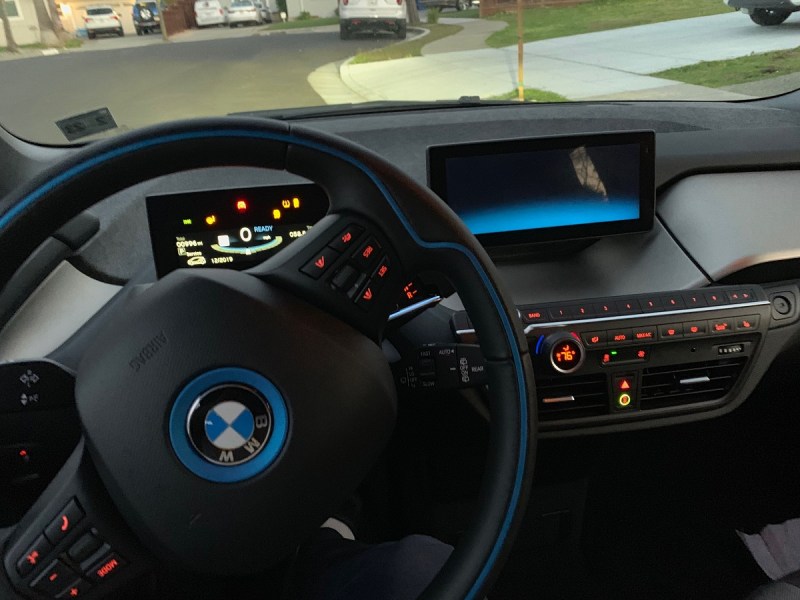 Above: BMW i3s has a couple of screens sitting on the dashboard.

The BMW i3s designers made the odd decision to put two side-by-side displays that look like the top half of a laptop. They stick out in space like a couple of horizontal monitors and aren’t covered by any dashboard housing. If I wanted that kind of look, I would just sit at my desk.

The vehicle uses BMW ConnectedDrive technology, which comes with a BMW i Remote app. You can use the app to remotely check and control the various functions of BMW i models like the i3s. You can view the app on an Apple Watch, checking things like the car’s current battery status. You can get an alert when the car is fully charged. And the app will tell you if the car is locked.

In addition, your Apple Watch can continue to receive navigation instructions after you’ve parked the car. The Apple Watch app can also guide you back to your car, if needed, and it lets you “precondition,” the car, meaning you can turn on the heater or air conditioner before you get, if you want.

The app can also send service alerts, like when a brake fluid change or service is due. You can also use Apple CarPlay with the BMW i3s, and it has a handy bay for wireless charging. 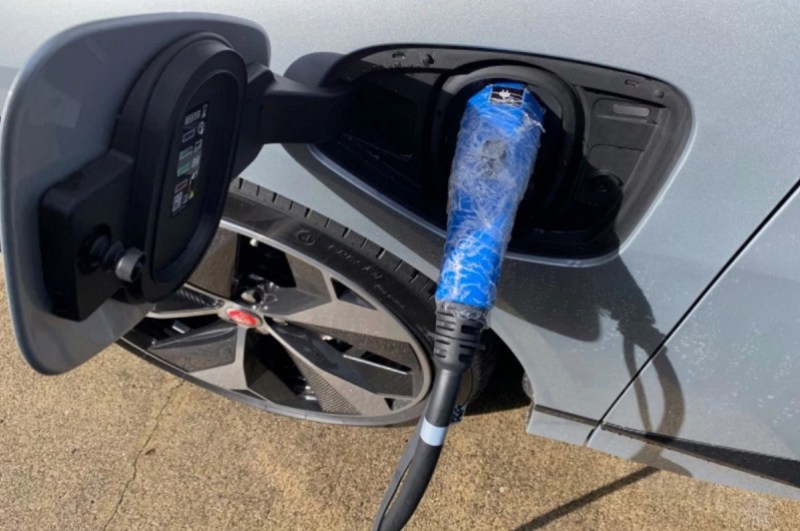 Above: You have to have your key available if you want to unplug the charger.

For both cars, I learned that plugging them into an ordinary house electrical socket doesn’t do much good. You might charge 1 percent of the battery per hour that way, even if you left it plugged in for days.

The Jaguar I-Pace got about 292 miles on its 90 kilowatt-hour battery, and it did a pretty decent job of self-charging at low speeds, meaning I could drive it around without “range anxiety” or fear that I was going to run out of power. The instrument panel shows you how many miles the car can go on its current charge, and you can also check in using the Go I-Pace app to see the range available.

I was able to charge the vehicle at any EV charging station, using a keycard with a code to access an account. You have to have your key available if you want to pull the charger out, which prevents somebody from just coming along and unplugging it.

And yes, you should invest in the 100 kilowatt DC fast charger for the Jaguar, as it can charge 80 percent within 40 minutes. It takes about 10 hours to charge in a 230W AC wall box.

The BMW’s range was only about 160 miles, with a 42 kilowatt-hour battery. But I could never get it to charge much, for some reason, so I always had some “range anxiety” when I was driving it around. It would also inexplicably drop a number of miles, even though I hadn’t driven it that much. It was nice to know exactly how many miles I had to drive before it would stop. But the inexplicable drops were alarming.

I managed to lose the cover for the electric charging hose, which fell off while I was driving. It also felt a little hard to maneuver, as I had to keep pushing on it to get it to open. I think BMW needs to apply a bit more of its vaunted engineering prowess to designing that pop-out. 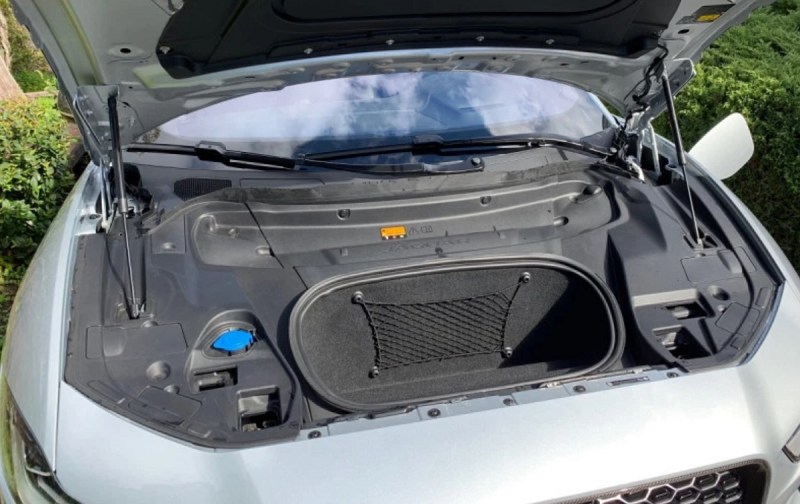 Above: The Jaguar I-Pace’s front trunk is not a selling point.

The sensors on these new Jaguars are pretty crazy and plentiful. The Jaguar has rain-sensing windshield wipers. It will detect if the driver is drowsy and sound an alarm. It also senses if you are veering out of your lane on the freeway and will keep you in the lane automatically.

The Jaguar has heated door mirrors with approach lights, meaning it flashes an orange light if another car is coming up alongside your car and about to pass you. It can also recognize traffic speed signs and adapt your speed as needed. You can set the cruise control to limit your top speed.

The BMW i3s also has rain-sensing wipers and can adjust the speed of the wipers automatically. It will remember your preferences for heating and air conditioning. It also has heated side mirrors so it can melt snow on the mirrors easily.

The Jaguar base model goes for $69,500, and it’s quite comfy, with its form-fitting seats. The $85,900 edition has a heads-up display and a driver assist pack that includes high-speed emergency braking; a 360-degree surround camera; and blind-spot assist, which warns you with a light on your mirror when cars are coming into your blind spot. It’s a fast car, and I didn’t find much to dislike about it, aside from that small front trunk.

The BMW i3s starts at $47,500, considerably less than the Jaguar. It doesn’t look nearly as stylish, but it’s functional. It doesn’t have the range that an electric car should, which means it isn’t a great option for commuting from San Jose to San Francisco.

OK, I’m not going to be buying these cars anytime soon. So you’re on your own when it comes to figuring out whether either one is worth the price. But it’s nice to know you can save the planet with zero emissions and still be stylish and comfortable.