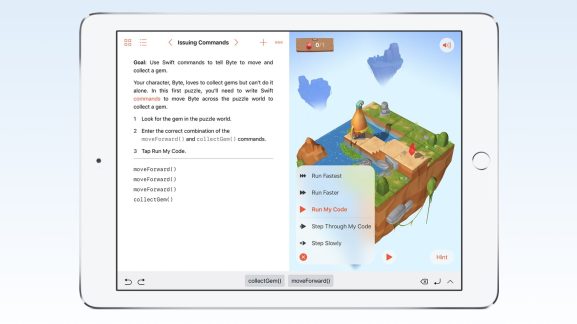 Apple’s homegrown development language Swift has evolved considerably since it debuted in 2014. And with version 5’s public release just around the corner, there’s also a new beta of its “fun” iPad coding tool for students: Swift Playgrounds 3.0.

The beta version of 3.0 (via MacRumors) is notable primarily for its compatibility with the nearly finished Swift 5, which Apple notes might break code written using earlier versions of the language. Relatively bare release notes suggest that Playgrounds 3 adds a new source editor tab, and allows Playground Books to hold “directories of Swift code and resources that can be imported for use by any page in that book.”

Apple has intermittently updated Swift Playgrounds since its first release in June 2016, adding language support, the ability to control accessories, and an ARKit augmented reality spotlight. The current public version is Playgrounds 2.2, which largely improved upon previous features such as content discoverability, touch recognition, and virtual keyboard performance.

Version 2.2 is available to everyone as a free App Store download here. Beta version 3.0 is available solely to prior TestFlight testers of Playgrounds 2.2 for the time being, but will likely become available to the broader public alongside Swift 5, which is currently expected to go final in or around April.