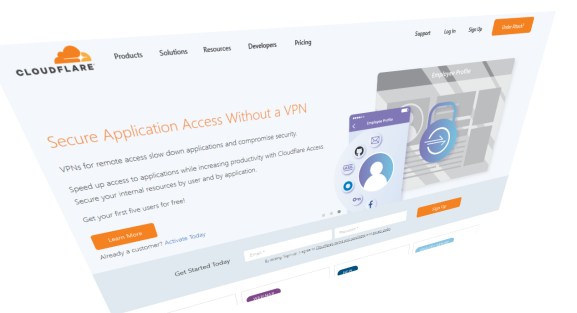 Web performance and security platform Cloudflare has raised $150 million in a round of funding led by Franklin Templeton.

Founded in 2009, Cloudflare offers a range of services to help companies reduce latencies. Offerings include distributed denial of service (DDoS) attack mitigation and a content delivery network (CDN) — a global network of proxy servers and datacenters that ensures content is delivered to users from locations closest to them.

Reports emerged last year that Cloudflare was considering an IPO for the first half of 2019, one that could value the startup at more than $3.5 billion. This latest funding round suggests the company isn’t as close to going public as those reports suggested, but it does perhaps indicate that Cloudflare is pursuing an aggressive growth spurt ahead of a public offering in the not-too-distant future.

This latest raise is the San Francisco-based company’s first outside funding since 2015, when it announced a $110 million series D round from some big names, including CapitalG (formerly Google Capital), Microsoft, Qualcomm, and Baidu. Cloudflare has now raised north of $330 million since its inception, and with this latest funding tranche it plans to extend its range of products and continue its global expansion, according to a press release.

Another CDN company reportedly mulling an IPO in 2019 is Fastly, which has raised nearly $220 million, including a $40 million injection last summer.

Certainly, if Cloudflare and Fastly were to hit the public markets this year, it would fit into a broader trend of security-focused platforms embracing Wall Street. Zscaler jumped on the Nasdaq last March, and 12 months later its shares have pretty much quadrupled from its $16 million IPO price. Other security companies to go public in the past year include Carbon Black and Tenable, while heavily funded CrowdStrike is also reportedly chasing an IPO for 2019.

Alongside its mammoth raise, Cloudflare announced today that it has added two new members to its board of directors: Maria Eitel, founder and co-chair of the Nike Foundation, and Stan Meresman, former CFO at Silicon Graphics.