WhatsApp is working on a major new feature to tackle the spread of misinformation on its service. The Facebook-owned chat app is internally testing a new option that would allow a user to quickly verify the legitimacy of images they have received on WhatsApp by checking if they had ever appeared on the web before.

A reference of this feature was first spotted by WABetaInfo, a developer that has gained notoriety for revealing future WhatsApp product plans by combing through the app’s code. VentureBeat understands the company is indeed internally testing the feature, although a WhatsApp spokesperson declined to comment.

The unnamed feature relies on Google’s reverse image search function to let WhatsApp users upload an image and find where it has appeared on the web. This is a clever solution by WhatsApp, which protects all messages and media content on its platform with end-to-end encryption. While hugely beneficial to end users, using encryption also significantly curtails WhatsApp’s ability to scan the content of messages and media on its platform.

In emerging markets, users are exhibiting a growing appetite for sharing information through images. In places like India, WhatsApp’s largest market and where the service is grappling with the spread of false information, the feature could potentially help many users quickly verify facts and get more context about the image they have received.

The likely imminent feature comes as WhatsApp has been introducing various safeguards on the platform. The company has enforced a limit on the number of messages WhatsApp users can forward, and run various educational campaigns to urge tens of millions of first-time users to be more cautious about the messages they share with their friends and family. Last month, WhatsApp said its system was banning 2 million fake or abusive accounts each month — much of that without relying on reporting from users.

According to WABetaInfo, WhatsApp is also working on expanding WhatsApp Pay, its payment service that it’s currently testing in India, to the U.K., Brazil, and Mexico. 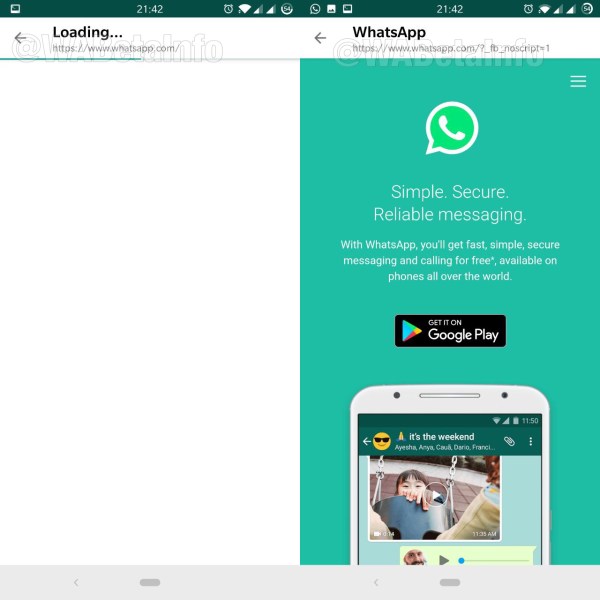 The developer also shared an image that shows an in-app browser on WhatsApp’s Android app. The developer told VentureBeat that the in-app browser was currently limited to Android 4.1 and up. Additionally, like Firefox, Chrome, and Safari, WhatsApp’s in-app browser uses Google’s Safe Web Browsing service, which warns users when they attempt to visit a website that has been known to spread malware and other harmful content.