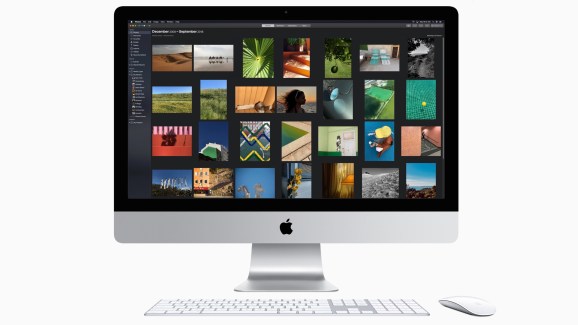 Six and a half years after Apple first introduced the slim-bodied iMac, the company today announced updated versions that continue to reuse the same industrial design, but with internal improvements, including Intel 8th- and 9th-generation Core-series CPUs and faster memory. Two of the new iMacs can also be customized with higher-end AMD Radeon Pro Vega graphics cards.

As Apple’s all-in-one desktop computer for consumers, the iMac has long hit the “sweet spot” in terms of features, performance, and pricing. Compared with popular MacBook laptops, iMacs have larger 21.5-inch and 27-inch screens, faster chips, and more connectivity options while spanning similar $1,099 to $2,299 price tags (before customization). Models starting at $1,299 feature 4K or 5K Retina displays and dedicated GPUs.

Today’s new iMacs arrive two years after their last spec refresh, which has enabled Apple to transition from Intel’s 7th-generation Intel Core i5 and i7 processors to a mix of 8th- and 9th-generation chips, all unsurprisingly faster than before — an improvement that can boost 3D graphics in games and VR applications. In addition to coming in either four-, six-, or eight-core versions, the highest-end Core chips support 2666MHz DDR4 RAM, up from 2400MHz before.

Apple’s new lineup ushers in a speed jump for both the midrange and high-end 21.5-inch models. The midrange model has a 3.6GHz quad-core Intel Core i3 and Radeon Pro 555X, while the high-end 21.5-inch model has a 3.0GHz six-core Intel Core i5 with a Radeon Pro 560X. Both are 8th-generation Intel parts, not 9th-generation, but use 2666MHz DDR4 memory.

Each can be upgraded to a 3.2GHz six-core Intel Core i7 for a $200 to $300 premium, and the highest-end 21.5-inch model can upgrade to AMD’s 4GB Radeon Pro Vega 20 graphics card for $350. With maximum specs, Apple claims up to 60 percent faster performance on the new models and up to 80 percent faster graphics performance with the Vega 20.

It’s also worth noting that Apple has not brought its T2 security chip to the 2019 iMacs — one of several omissions that suggest comparatively minor architectural changes inside this machine. Now used in Macs ranging from the iMac Pro to the MacBook Pro and Mac Mini, the T2 chip enables a more secure Apple-controlled boot process, enhanced storage encryption, and improved processing for the FaceTime HD camera. But some users have experienced unexpected hiccups due to the chip, in some cases requiring time-consuming physical repairs or replacements.

One interesting question is how the highest-end iMac will compare with the late 2017 iMac Pro, which starts at $4,999 and comes with the user’s choice of an eight-core Intel Xeon W processor at 3.2GHz or premium upgrades ranging from 10 3.0GHz cores to 18 2.3GHz cores. That model started with a Radeon Pro Vega 56 (8GB) GPU, 32GB of RAM, and a 1TB SSD and could be configured with significant upgrades available beyond the base specs. Two years of chip improvements and an eight-core option could bring the top-end iMac within striking distance of the entry-level iMac Pro; benchmarks will be needed to see whether that happens.

If you’re a potential iMac Pro consumer with extra cash to burn, Apple has a couple of new custom configuration options for you. There’s now a $5,200 256GB RAM upgrade and a $700 Vega 64X GPU upgrade, bringing the maximum price of that machine — minus optional accessories — up to $15,699.

The new iMacs are available to order today. They will be in stores and shipping to preorder customers next week, around the same time as yesterday’s newly announced third-generation iPad Air and fifth-generation iPad mini.