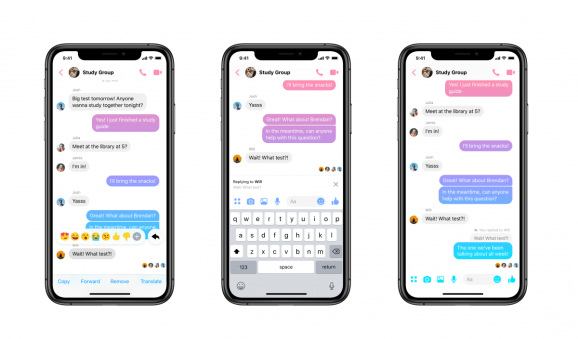 Facebook Messenger aficionados, good news: It just got easier to respond to your best buds’ messages with hot takes.

Facebook today announced that message replies — one step short of threaded messaging, basically — are launching globally for the more than 1.3 billion people who use Messenger. Long-pressing on the text to which you want to reply and tapping on the Reply icon kicks things off; you’re able to respond to individual GIFs, videos, emoji, text, and photo messages. And thankfully, replies don’t interfere with the text thread: The original message remains visible after it’s been responded to.

The launch of replies follows shortly after Messenger gained an ‘unsend’ feature that gave users the ability to remove a message from a one-on-one or group chat for up to ten minutes after it has been sent, and following an earnings call during which Facebook CEO Mark Zuckerberg told investors that the company was committed to making more of its products ephemeral, in response to growing user demand.

It also follows a year in which Facebook recommitted to “streamlining” and “simplifying” the Messenger experience. In a blog post published last January, former Messenger chief David Marcus conceded that the service had become cluttered with new — albeit in some cases welcome — features like chat extensions and expanded peer-to-peer payments.

“Over the last two years, we built a lot of capabilities to find the features that continue to set us apart. A lot of them have found their product market fit; some haven’t,” he wrote. “While we raced to build these new features, the app became too cluttered. Expect to see us invest in massively simplifying and streamlining Messenger this year,” Marcus said in January 2018.

Facebook eventually intends to unify the infrastructure underlying its family of messaging services — Messenger, WhatsApp, and Instagram Direct — with end-to-end encryption, according to The New York Times. (Currently, only WhatsApp has end-to-encryption enabled by default, although the feature can be switched on manually in Messenger.) Reportedly, users will still be able to download each app separately after the migration is complete, but WhatsApp users will be able to send messages to friends who have Facebook or Instagram, for instance, even if those friends don’t have WhatsApp.

It comes as no surprise, really. A report from AppAnnie in January found that as of late 2018, WhatsApp had more monthly active users on Android and iOS than the Facebook app. Similarly, a Pew survey last spring found that Instagram is more popular among teens than Facebook.