Fetcher, a startup that helps companies automate the process of headhunting the best candidates, announced that it has raised $5.4 million in a seed round of funding co-led by Accomplice and Slow Ventures, with participation from Picus, Revel Partners, and a host of angel investors, including Kayak founder Paul English.

With a workforce crisis looming, venture capitalists (VCs) have been plowing millions of dollars into recruitment-focused startups. And, as with other industries, artificial intelligence (AI) is playing an increasingly important role.

Against this backdrop, Fetcher helps companies find potential candidates by proactively combing through numerous online channels, such as LinkedIn, Twitter, GitHub, Stack Overflow, and Dribble and then figuring out the best way to contact qualified individuals.

The problem Fetcher fixes is this: Highly skilled employees tend to be in demand and may be less inclined to look for a new job if they are already well compensated and appreciated in their current position. Headhunting is an age-old tactic, but it is also extremely time-consuming, which is where Fetcher steps in.

Fetcher’s platform is able to correlate keywords and skills to work out whether a potential candidate has the experience required for a position — even if they haven’t listed a specific skill. For example, a software developer who says they have CSS knowledge is also likely to have experience working with HTML and front-end projects, regardless of whether they mention that in their profile.

In addition, Fetcher can automatically compose emails personalized for these candidates, though it’s worth noting that its in-house team of humans works with clients to establish a template outreach message. Once this has been set up, the system can be synchronized with the customer’s email account and automate everything from that point on — including follow-up emails. 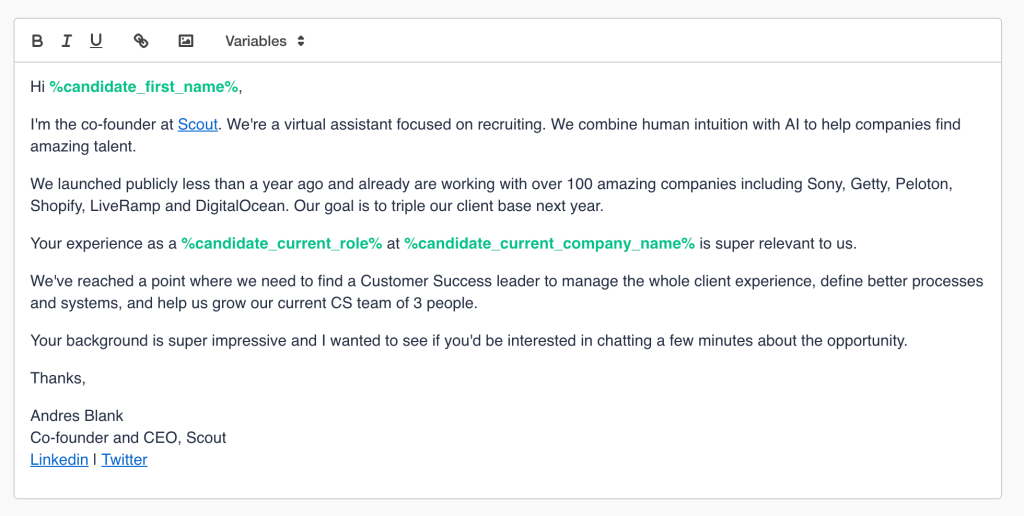 The interface also allows recruiters to edit and fine-tune the text for each message, if needed.

Originally launched as Scout back in early 2017, the New York-based startup rebranded as Fetcher last year to avoid confusion with similarly named companies. Prior to now, it had only raised a little over $1 million. With a fresh $5.4 million in the bank — which it quietly raised in late 2018 — the company has made a number of senior executive hires across various departments.

“With our latest round of funding, we were able hire several outstanding executives and industry luminaries to lead our sales, customer success, and operations teams,” said Fetcher cofounder and CEO Andres Blank. “We’re also focused on using our funding to scale our data science and engineering teams to ensure amazing product innovations for our customers.”

Blank previously cofounded a photo-sharing app called Pixable, which he sold to Singaporean telecom giant Singtel for more than $26 million in 2012. After working on a business messaging app called Caliber for a while, the team pulled the plug and in 2015 founded Fetcher with Chris Calmeyn and Genevieve Jurvetson.

Today, Fetcher claims some pretty big-name customers, including Getty, Sony Music, Reddit, Shopify, DoorDash, Peloton, AppNexus, and Bridgestone. The reason for this success is simple — Fetcher promises to open up the talent pool. Its automated approach should also go some way toward removing human bias from the recruitment process.

“At Fetcher, we believe the best people are typically engaged in their work, and you have to proactively recruit them,” added Jurvetson. “Top candidates will rarely be found via job boards, in marketplaces, or through your inbound applications. The challenge is that most companies don’t have the time or domain expertise to effectively find and attract the best people.”