The workforce crisis is looming, a situation that could hit the global economy to the tune of $10 trillion, according to some studies. The crux of the problem relates to a mismatch between supply and demand, with some economies facing a workforce shortage and others a surplus.

“An equilibrium in supply and demand is rapidly becoming the exception, not the norm,” a report from the Boston Consulting Group (BCG) noted. “Between 2020 and 2030, we project significant worldwide labor-force imbalances — shortfalls, in particular. One significant implication is the potential aggregate value of GDP squandered, because either these nations cannot fill the jobs available or they cannot create enough jobs for the workers they have.”

On the other side of the fence, artificial intelligence (AI) is also increasingly encroaching on the workforce, with up to 800 million people potentially displaced by automation by 2030, according to a recent McKinsey report.

Put simply, a lot of change is afoot in the world of employment.

Against that backdrop, a number of startups have emerged from the shadows to try to fix the impending workforce headache. Venture capitalists (VCs) have taken note, plowing millions of dollars into myriad recruitment-focused startups.

One such startup is Fetcher, which relaunched this week with a brand new name after rolling out last year under the name Scout.

The underlying problem that Fetcher is looking to fix is this: Highly skilled, in-demand employees are less inclined to be on the hunt for new jobs, which is a problem for companies seeking top talent. Headhunting is an age-old tactic, of course, but it can be very time-consuming and resource-intensive, which is why Fetcher is using artificial intelligence (AI) to automate the process of sourcing potential candidates, with humans on hand to help with the process. The company claims that its automation offers its clients a 10-fold cost advantage over using an in-house sourcer, or a 20-fold advantage compared to a recruitment agency.

Fetcher searches for qualified personnel through all the usual professional networks, such as LinkedIn, Twitter, GitHub, and so on, establishing the best way of contacting them. This information is actually put into its own database which, it told VentureBeat, currently holds 100 million candidates that grows and refreshes over time.

Fetcher also integrates with Slack so companies can collaborate and discuss prospective candidates as part of their daily workflow. 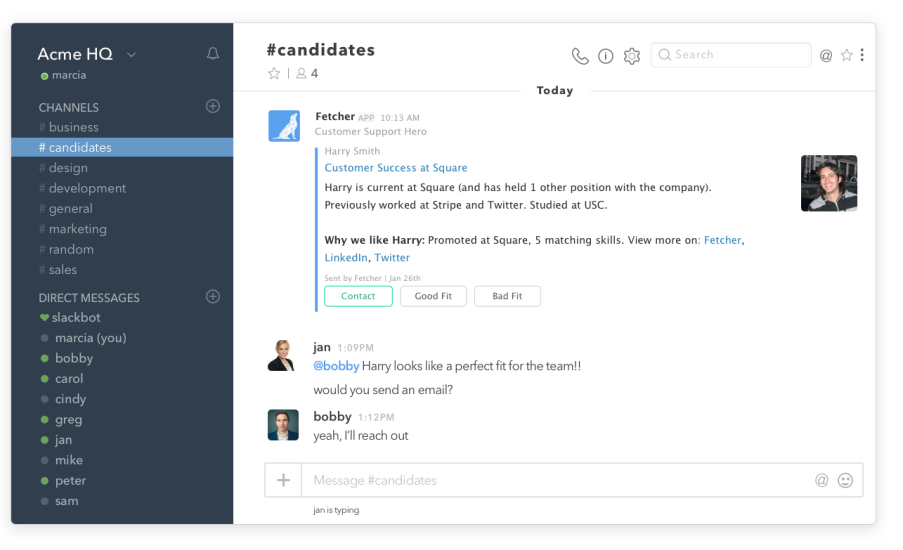 The platform correlates keywords and skills to determine likely skill sets that might not be listed specifically on candidates’ online profile. One example Fetcher provided VentureBeat: A software engineer who is knowledgeable in CSS is more than likely to be proficient in HTML and front-end development, too, even if they don’t specifically mention that.

Fetcher also searches for hiring patterns at other companies to establish insights that may be difficult for a human recruiter to identify. The platform analyzes the backgrounds of its clients’ existing employees to find patterns around education, professional backgrounds, skills, and so on, so it can find people of a similar ilk elsewhere.

Fetcher then composes “personalized” emails for these candidates automatically, using data that it said is “proven to convert well in a recruiting email.” This includes describing the recruiting company, giving reasons why it has reached out to that person, and what impact that person will have on their own career and on the recruiting company. Here is one example that Fetcher used recently with one of its own internal hires: 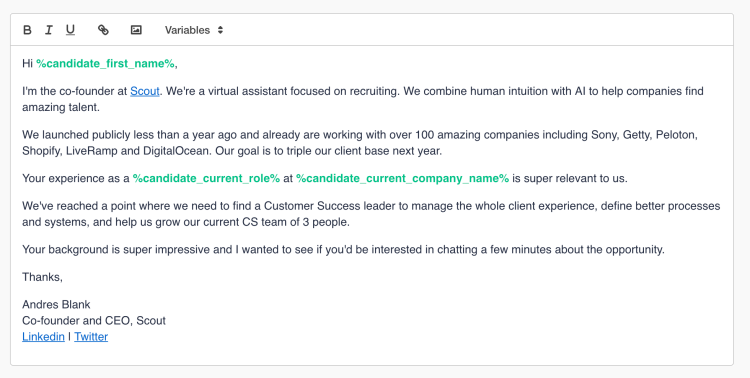 However, recruiters can tweak and fine-tune the text, too.

While AI plays a large part in sourcing the candidates, humans are very much involved too — they check over the identified candidates to make sure everything looks OK, removing any unsuitable individuals that may have crept in. Fetcher then shares the best candidate profiles in small batches at a time, using feedback from the client to improve the AI so that suggestions get better over time.

The feedback system covers broadly whether the candidate is a good or a bad fit, with scope for providing specific feedback. Fetcher does use natural language processing (NLP) initially to try to detect the sentiments the client provides; however, if it struggles to garner meaning, the message is flagged and one of its human employees takes over.

This helps to highlight where we currently are at with artificial intelligence. AI may be improving all the time, but it will have to work in conjunction with humans for the foreseeable future so that it can learn how people think, operate, and, ultimately, make decisions. And it’s not entirely clear yet whether it will ever be able to operate entirely autonomously, given humans’ unpredictable behavior traits.

“The reality of automating candidate recruiting is that there will be need of human supervision for the next years to come,” Fetcher cofounder and CEO Andres Blank told VentureBeat. “One of the main reasons for this is that companies frequently will contradict themselves on what’s important to them.”

One example Blank provided was that of a recruiter who initially stipulates a set of criteria that they’re looking for — they may only want computer scientists from top universities, for example. However, they may later spot a candidate who doesn’t quite meet that standard, but who has other qualities that more than make up for it. This kind of nuanced decision-making isn’t something that the AI is quite ready to replicate.

But Fetcher also promises to fix other issues that blight the recruitment realm — including diversity. Through Fetcher, companies can target minority candidates at a greater scale than would be possible manually.

“Recently we helped a Fortune 500 firm hire 40 candidates with diverse backgrounds for their summer program,” Blank added. “This was achieved by targeting hundreds of qualified candidates from diverse backgrounds. Filling the top of the funnel with diverse, qualified talent helps companies address diversity challenges in a meaningful and affordable manner, and we’ve been approached by several large companies to specifically focus on these initiatives.”

But couldn’t this also be used conversely to exclude people from certain backgrounds? Remember, this is something that Facebook has gotten in hot water over in the past about. According to Blank, there is nothing in its platform that would allow a company to “explicitly discriminate” against specific groups of people. “Plus, we flag cases where a client is disliking a candidate despite the candidate meeting the criteria of a role,” he added.

So in theory, if you train the AI system to follow a strict set of criteria that focuses on skills and experience, for example, it should actually remove biases from the initial process. Moreover, based on the feedback it gathers from its clients, it monitors the candidates that they are liking and not liking, including the reasons why, to resurface potential hires that meet all the criteria but are being overlooked for whatever reason.

New York-based Fetcher was co-created as Scout in 2015 by Blank, who previously cofounded a social photo-sharing app called Pixable which he sold to Singapore’s Singtel for more than $26 million in 2012. After a couple of years working on a business messaging app called Caliber, the team pulled the plug on that project to focus on Scout, which launched officially to the public last February. At the time, Blank said of the company’s intentions:

Our mission in building Scout is to equip managers with the tools they need build a talented and diverse pipeline of candidates for every role. We want to level the playing field in hiring and automate the most time-consuming and frustrating parts of hiring.

In the intervening 14 months, Fetcher has raised $2.5 million in seed funding from VC firms including Foundation Capital, Picus, Revel Partners and Chromo Invest, while angel investors such as Paul English, James Joaquin, Amol Sarva, Ed Roberts, and Inaki Berenguer have also chipped in. It has more than doubled its team from 40 employees to more than 90, while it claims 150 clients including Lyft, Reddit, Shopify, Eventbrite, Getty, Sony Music, WePay, and DoorDash.

While it is still early days for Fetcher, it’s working with a winning formula by bringing AI into the recruitment fold. The much-trumpeted global workforce crisis is just around the corner, and we’re seeing many attempts to optimize and improve HR practices through automation. Earlier this week, Eightfold.ai launched courtesy of former Googlers and Facebookers who are setting out to remove biases from the hiring processes by bringing together AI, search, and big data. And last year, Mya Systems raised around $30 million for its recruitment chat bot. Interestingly, Fetcher investor Foundation Capital invested in both Eightfold.ai and Mya Systems.

Countless other companies have raised notable sums of cash over the past year to “fix” recruitment with AI. Woo raised $7 million for its AI-infused headhunter platform, while Pymetrics, a company that merges AI and neuroscience games to match people with the best job, raised $8 million and Ideal raised $3 million to grow its AI-driven recruiting platform targeting the “inefficient high-volume hiring process.” The list goes on, too.

AI is clearly out to disrupt recruitment, that much is clear. So this really just leaves us one more question: Why did Scout decide to change its name to Fetcher?

“While we loved the Scout name, it turns out there are several other companies with a similar name who feel equally enamored with it,” Blank explained. “To avoid continued confusion for our customers and prospective customers, we decided it was necessary to change our name.”

So there you have it. Moving forward, hopefully Fetcher won’t be confused with home security systems, cloud-based esourcing companies, or Telenav’s GPS navigation app.