Ouster, a San Francisco-based lidar startup that launched out of stealth in December 2017, today announced that it’s raised an additional $60 million in funding following a $27 million series A. This latest round — which was led by Runway Growth Capital, with contributions from Silicon Valley Bank, Cox Enterprises, Constellation Tech Ventures, Fontinalis Partners, Carthona Capital, and others — brings the company’s total raised to $90 million.

The fresh capital will be used to fund the expansion of Ouster’s production facilities, according to cofounder and CEO Angus Pacala, like its newly opened Bay Area quality assurance testing and sensor calibration center. He expects that it’ll have the capacity to assemble and ship “several thousand” sensors per month toward the tail end of 2019 (up from “hundreds” currently), and that Ouster will roughly double its headcount in the coming months to roughly 200 full-time employees across engineering, operations, business development, and marketing.

“The momentum we’re seeing in our business is driven by the demand we’re seeing in the market for customers wanting to push the performance frontier,” said Pacala. “The company has maintained a low profile for over two years — staying heads-down and focusing on getting [products] ready to ship. I’m incredibly proud of our team for their hard work to produce the most advanced, practical, and scalable … sensor on the market, and we’re very excited about the impact our product will have in autonomous vehicles and other applications in robotics.”

Lidar — sensors that measure the distance to target objects by illuminating them with laser light and measuring the reflected pulses — is at the core of a number of autonomous car systems, including those from Waymo, Uber, and GM’s Cruise, but its use cases extend beyond automotive. It’s been tapped for obstacle detection and avoidance in mining vehicles, atmospheric studies for space, forestry management, wind farm optimization, speed limit enforcement, and even video games. 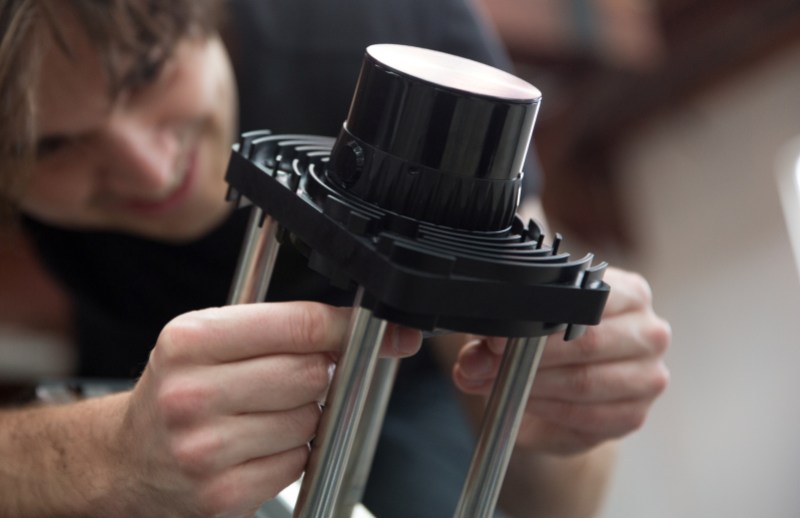 Ouster makes four models in two product lines: the OS-1 and OS-2. Sensors in the OS-1 family, which are designed for short- and medium-range applications, have 150-meter ranges, resolutions from 16 to 128 channels, and weigh in at about 380 grams — the lightest of any like sensors on the market, Ouster claims. The single long-range OS-2 sensor, meanwhile, has a 64-beam resolution, a range of over 200 meters, and a 22.5-degree vertical field of view.

The lidar market is projected to be worth $1.8 billion in just five years, and it’s a crowded field. Israeli startup Innoviz Technologies raised $65 million in September 2017 for its lidar tech, following on the heels of funding rounds by Oryx and TetraVue. Luminar, which claims to have developed lidars with a range of more than 250 meters and a 120-degree field of view, recently announced a strategic partnership with Volvo, and in January, lidar startup Baraja raised $32 million for its innovative prism-like optics design. That’s not to mention far-infrared pioneer AdaSky, ground-penetrating radar startup WaveSense, and velocity-measuring sensor company Aeva, all of which seek to develop technologies that complement traditional vision-based autonomous car perception systems.

Pacala says its customer base now includes more than 400 companies representing industries from autonomous vehicles to industrial robotics, agriculture, mapping, defense, and drones. “It’s amazing that just a year ago we could count our customers on one hand, and [now] … engineering teams around the world are using Ouster’s sensors to build new industries and reshape old ones,” he said. “It’s humbling to know that this demand exists — it motivates us every day to deliver for our customers.”

Ouster also today announced that Susan Heystee will join its board of directors. She most recently served as senior vice president of Verizon’s automotive division, and previously was executive vice president of sales at vehicle and connected mobility company Telogis.

“I’m thankful for the opportunity to share my expertise and skills with the leading lidar company poised for growth and one highly focused on bringing 3D sensing to the masses,” said Heystee, in a prepared statement. “I look forward to working with Ouster’s talented management team to extend the company’s market leadership.”