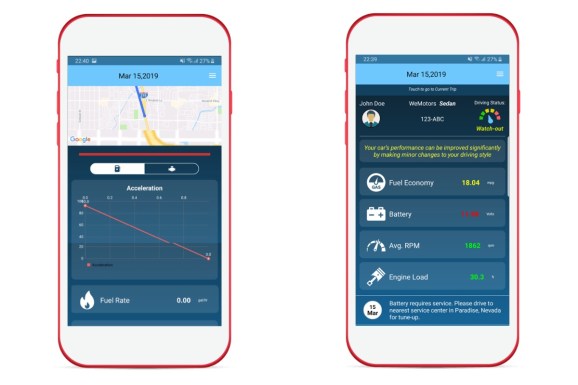 At its annual Summit conference in Las Vegas this week, Adobe took the wraps off of a cloud-based app designed to anticipate — or mitigate, worst-case scenario — serious mechanical issues. It made its debut during the eighth annual Adobe Sneaks, an internal program that offers Adobe engineers, researchers, product managers, and designers the chance to submit proposals for an opportunity to demonstrate them in front of an audience of thousands.

The service in question — which doesn’t have a name yet — leverages vehicle telemetry to provide predictive recommendations on maintenance needs. By capturing key data points like battery performance and engine health, it’s able to suggest part repairs that might save hundreds in costs. Moreover, it enables users to send aggregated and anonymous reports automakers can use to identify problematic patterns in car fleets.

The app’s user-facing dashboard calculates and collates metrics like fuel economy, battery voltage, average rotations per minute (RPM), and percentage engine load. Recommendations appear both in the form of natural language notifications — for instance, “Your car’s performance can be improved significantly by making minor changes to your driving style” — and a Driving Status icon in the upper-right corner. Nifty shortcuts surface charts that plot acceleration and engine usage over time, along with a geographic map of recently completed routes.

Above: The automaker dashboard.

As for carmakers, they get a UI that highlights vehicles at medium, low, and high risk of engine and battery failure. Stats like voltage and RPM are averaged across makes and models (e.g., SUV, hatchback, sedan, and crossover) and accompanied by a pie chart breaking down fleet composition.

“When cars are taken in for maintenance, consumers have minimal control in the interaction,” Adobe said in a statement. “With little data to draw from, recommendations on repairs and upkeep are largely taken at face value. [This app] allows users to be more proactive.”

It’s hardly a new idea. Canadian platform provider Moijo recently partnered with Bosch to deploy what it calls an “integrated internet of things platform for connected vehicles” — one that can detect when an accident occurs and evaluate its severity, and transmit data via Moijo’s cloud to emergency services. Meineke Car Care Centers sells the Meineke Revvy, a 4G-capable dongle that connects to a car’s OBD-II port to perform diagnostics, monitor performance and driving style, and deliver insights. San Francisco-based startup Automatic, which was acquired by SiriusXM in 2017, offered a similar service, as does Munic and pay-per-mile insurance provider Metromile. 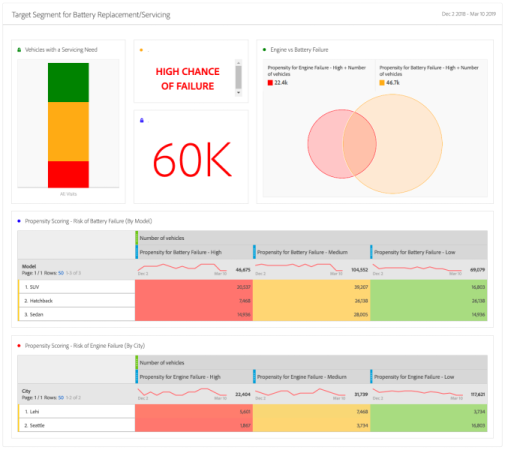 Why the explosion in aftermarket automotive telematics? Cash — and lots of it. By 2025, it’s estimated that there will be 116 million connected cars in the U.S. And according to McKinsey, vehicle telematics could create USD $1.5 trillion — or 30 percent more — in additional revenue potential by 2030.

Adobe, of course, isn’t pivoting away from its bread-and-butter businesses. On Monday, it debuted a collection of new AI-centric services (in beta) in Experience Platform (formerly Cloud Platform) — its sprawling family of content, development, and customer relationship management products — designed to drive customer engagement and highlight key points in client relationships, including a tool that recommends ways marketing engagements might be tailored to target specific user segments.