China and South Korea were poised to lead the world in 5G last year, but quick actions by U.S. carriers and government officials have tilted the “global 5G race” in America’s favor, according to a new report from wireless industry association CTIA. From readiness to actual deployments and spectrum allocation, the United States is now leading the transition to the next-generation cellular standard, but CTIA says two key issues remain unresolved: mid-band spectrum and a national strategy.

Although the idea of a global “race” to 5G might sound like fiction, the reality is that governments and carriers across the world are indeed moving at different paces to allocate 5G-ready wireless spectrum ahead of large-scale network deployments — efforts that will affect the adoption and development of this key next-generation wireless standard. By the end of 2019, the United States is expected to have 92 commercial 5G deployments, versus 48 in South Korea, 16 in the United Kingdom, and zero in China.

The key reason for this rapid uptake, CTIA says, was “quick action and visionary leadership” from U.S. policymakers, who responded to the call for 5G strategy with red tape-slashing regulations and laws. Consequently, the U.S. moved from third place in 5G readiness one year ago to tie China for first — also moving ahead of South Korea, which has actively coordinated and pushed local carriers to hasten their 5G deployments. 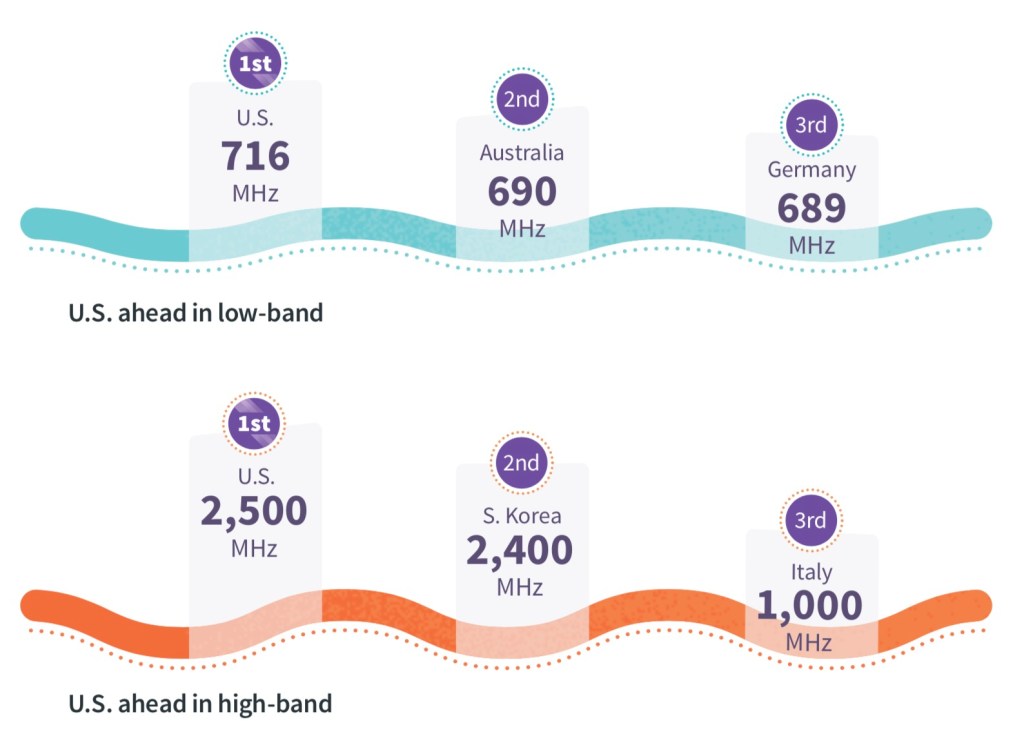 But spectrum allocation is more of a mixed bag. On a positive note, the U.S. now leads the world in the quantity of low-band and high-band spectrum allocated to 5G. With 716MHz of allocated low-band spectrum, which is slower but longer-distance, the U.S. is at least a little ahead of second-place Australia (690MHz) and third-place Germany (689MHz). Similarly, for millimeter wave high-band spectrum, the U.S. has allocated 2,500MHz of short-distance but high-speed frequencies, compared with South Korea’s 2,400MHz and third-place Italy’s 1,000Mhz. Those allocations have enabled U.S. carriers to commercialize millimeter wave 5G technology in some markets while promising slower low-band nationwide service.

Less positively, the U.S. is at the bottom of the pack in allocating mid-band spectrum — and that’s a problem. Spain has allocated 360MHz of spectrum, with Italy, China, South Korea, and the U.K. each a small step behind, but the U.S. has dedicated zero mid-band spectrum to 5G — although a sharing arrangement will enable carriers to use some spectrum preemptively controlled by the U.S. Navy. As a result, carriers and device makers aren’t able to sell U.S. devices that depend wholly on the mid-band frequencies that most other countries are using for 5G, making it harder to offer a globally usable 5G smartphone. 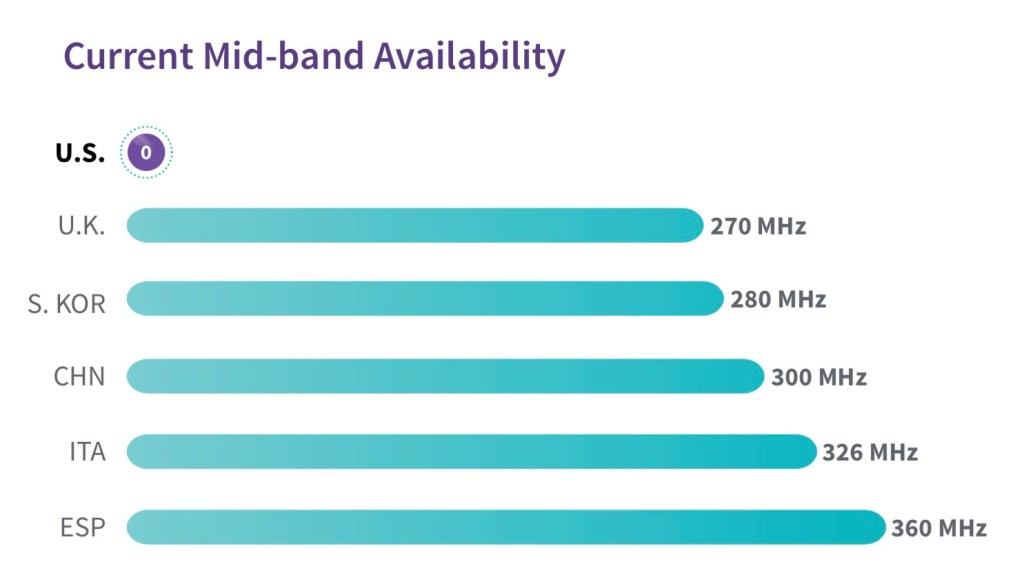 As it has done in the past, CTIA is recommending a proper national spectrum strategy for the United States, including three key points: five years of auctions to put more spectrum into carriers’ hands, modernized government policies to optimize the use of spectrum, and the use of free market and competitive approaches to promote security.

There’s already movement on all fronts. The FCC is currently in the midst of auctioning additional millimeter wave spectrum, with plans to offer mid-band spectrum in the foreseeable future, and has been aggressively reducing federal and local roadblocks to 5G deployment. Last week, U.S. Senators introduced a “5G and beyond” wireless security bill that would preclude nationalization of cellular networks in favor of free market competition.