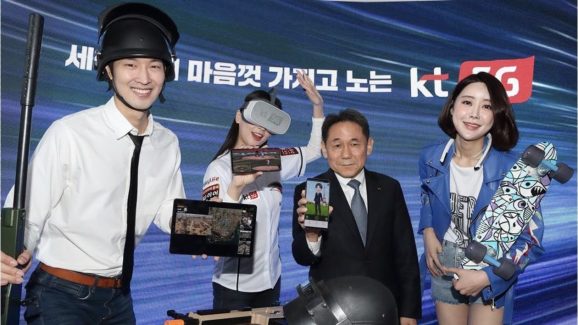 Korea Telecom will begin offering 5G service later this week, as the country’s three cellular carriers are participating in a government-coordinated commercial 5G launch. The second-place carrier waited until after its rivals’ plans leaked to announce more aggressive 5G pricing at a press conference in Seoul (via Korea Times).

“We thought the unlimited plans would be essential for 5G services, as data use is expected to increase,” said KT’s 5G marketing chief, Park Hyun-jin. “The 5G Super Plan Basic is 9,000 won cheaper than the unlimited data plan for LTE services.”

KT’s four plans are as follows:

The carrier will start by offering 5G data within 91 South Korean cities and will update its 5G coverage map “every day” after its launch on April 5. KT promises that its network is launching with sufficient capacity to handle the heavier data use that 5G will bring, including 20Gbps 5G base stations that will be capable of handling eight-person group video calls and simultaneous viewing of five esports channels at the same time.

Beyond unlimited data, the 5G Super Plans will offer unlimited international roaming data outside of South Korea, though the speed limits will feel brutal. Basic and Special plan users will be capped at 2G-like roaming speeds of 100kbps, while Premium users will have a top 3G-like speed of 3Mbps. The plans will also include free voice calls and text messages.

In the United States, Verizon will begin offering unlimited mobile 5G service in mid-April. Competitor AT&T is already offering 15GB of mobile 5G data for $70 per month, with no unlimited plan.