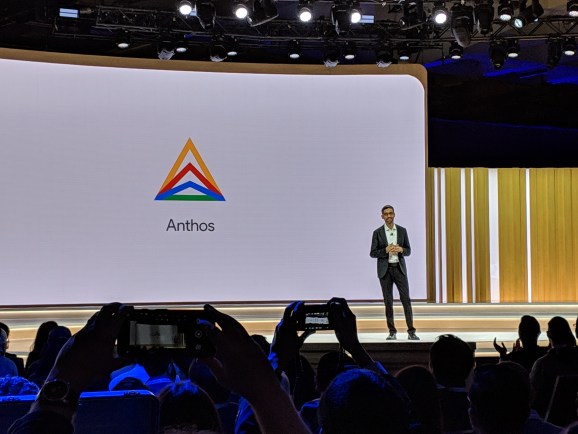 Google CEO Sundar Pichai announces the debut of Anthos during the keynote address at Moscone Center on April 9, 2019 in San Francisco

Google today announced that Anthos, a service for hybrid cloud and workload management run on the Google Kubernetes Engine, is now generally available. Anthos will work with Google Cloud Platform of course, but also plays well with multiple other cloud providers, including some of Google’s biggest competitors: Amazon’s AWS and Microsoft’s Azure.

Anthos is the new name for the Cloud Services Platform, which Google introduced in beta for hybrid cloud management last year. Google also introduced Anthos Migrate in beta for portability across clouds without the need to modify apps or virtual machines.

“It gives you the flexibility to move on-prem apps to the cloud when you’re ready,” Google CEO Sundar Pichai said today onstage at the Cloud Next developer conference in San Francisco.

Also announced today: The new Cloud Run for serverless and portable compute, partnerships with some of the leading open source projects, new regions in Salt Lake City and Seoul, and instances for Nvidia’s Quadro Virtual Workstation powered by T4 GPUs.

Anthos will launch with support from 30 major tech and developer services and will be supported by infrastructure service providers like Cisco, MongoDB, HPE, and VMware.

A number of Kubernetes apps were also introduced for the Google Cloud Platform last summer.

In 2014, Google open-sourced the Kubernetes project for containers that can run applications on cloud-based or on-premises servers. Kubernetes is now overseen by Linux Foundation’s Cloud Native Computing Foundation.

Containers like Docker and Kubernetes are an increasingly popular way to deploy apps and AI. A number of solutions have been made available in the past year that focus on deploying AI from Kubernetes containers, particularly for organizations interested in portability for on-premises or cloud-based inference such as Intel’s Nauta project for distributed deep learning and Linux Foundation’s Acumos AI platform.