Google today also upgraded AutoML, its service for automating the creation of custom AI models, at the Cloud Next conference taking place this week in San Francisco.

AI Platform launches in beta and is designed to be used by developers, data scientists, and data engineers.

“The AI Platform is the place where if you’re taking this terrifying journey from a germ of an idea of how you can use AI in your enterprise all the way through launch of a safe, reliable deployment, the AI Platform helps you move between each of those stages in a safe way,” Google Cloud chief AI scientist Andrew Moore told reporters ahead of the news. “So you can start with exploratory data analysis, start to build models using a data scientist, decide you want to use a specific model, and then essentially with one click be able to deploy it in our Google Cloud or in other clouds, or on-premises running on top of Kubernetes.”

AI Platform will operate in the Cloud Console and is able to handle both streaming and batch data. Google’s data warehouse BigQuery can be used to import data, and AI Platform users can train models using AutoML or Cloud Machine Learning Engine. 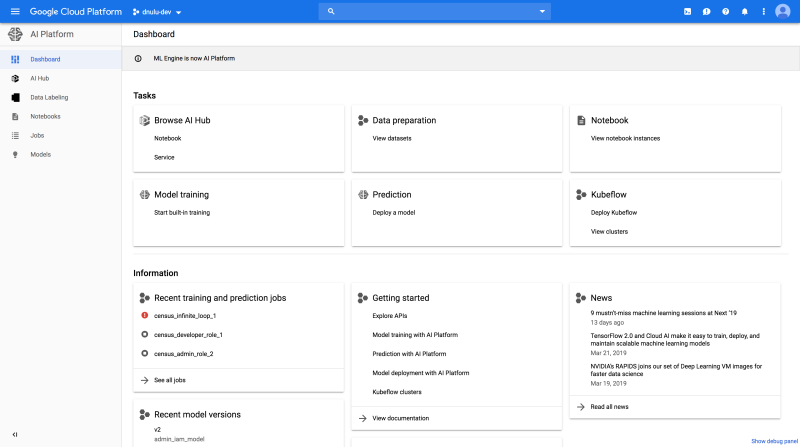 The newly created AI Platform can handle custom models and premade models like the kind found in AI Hub’s marketplace for useful and popular AI systems. Kubeflow Pipelines for automated workflows with Kubernetes containers, which made its debut alongside AI Hub last year, can also be used with the AI Platform.

Collaboration like the kind introduced today in AI Platform has also been an area of focus in recent months for DevOps tools such as ClusterOne and Determined AI.

Premade models were also made generally available today, including Contact Center AI, which launched in beta last year, and Retail to supply sales and retail businesses with predictive insights.

“We have people with many different layers of expertise trying to build machine learning systems together, and we’ve made the decision that we have to support the continuum,” Moore said.

A slew of major cloud and AI news has been introduced so far at Cloud Next, including Cloud Run for portable serverless compute, the ability to use your Android phone as a security key, and the introduction of Anthos, a hybrid cloud management service that incorporate Amazon’s AWS and Microsoft’s Azure.