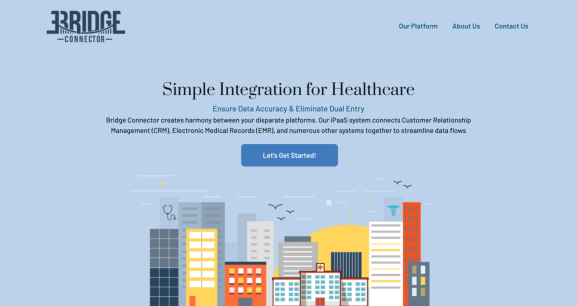 Bridge Connector, a Nashville, Tennessee-based startup developing an integration-platform-as-a-service (iPaaS) suite that unifies health care data systems, today announced that it’s raised $10 million in funding from Axioma Ventures, bringing its total capital raised to $20 million. It comes ahead of the close of its series B round in the fourth quarter of this year and after two seed rounds totaling roughly $5 million, and will fuel product development, expansion into new verticals, and hiring across its sales and engineering teams, according to CEO David Wenger.

“‘Growth’ has been our motto driving everything,” said Wenger, who cofounded Bridge Connector in 2017 after serving as president for five years at Florida-based marketing and advertising agency Marketran. “We partner with the largest health care organizations in the world, and we are just getting started.”

The idea, says Wenger, is to enable companies to transfer EHRs, billing, lab records, and other information quickly and cost-efficiently without the need for internal IT support, and to free up staff to focus on core business initiatives. Toward that end, Bridge Connector works with products from Salesforce, Allscripts, Brightree, PointClickCare, Kipu, Epic, Homecare Homebase, and others, streamlining the deployment process for clients with existing systems.

“Interoperability is within reach when we re-think health IT integrations from a ‘workflows’ problem-and-solution standpoint,” he added. “This results in a quicker time to value that the market is demanding.”

Bridge Connector has offices in Knoxville, Tennessee and Palm Beach Gardens, Florida in addition to its Nashville headquarters. (It was previously headquartered in Palm Beach Gardens.) Its workforce grew from five people to over 70 in its first year of business, and it expects to employ 100 people by the end of 2019.

“Bridge Connector is growing at a fast pace because of their unique and specialized solutions to our partners’ needs,” said Axioma Ventures partner Howard Jenkins, the former CEO and president of Publix. “Bridge has exceeded all expectations in quality and in growth, and we fully support the great work that is taking place.”