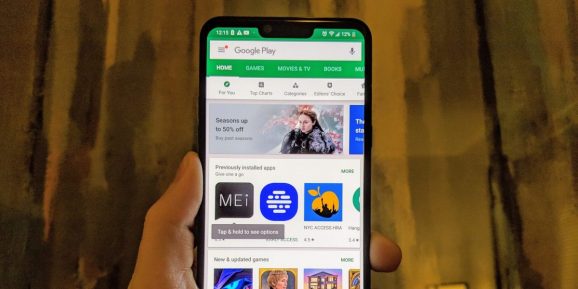 We’ve all gone on in-app buying sprees before, but Google wants to ensure your next binge doesn’t break the bank. To that end, it’s introducing a new budgeting feature in Google Play that lets users track expenses and specify an upper spending limit.

Budgets can be set from within the Google Play app on Android phones or tablets, but not the web. Launching the Play Store, tapping on the menu icon, and selecting Account and Purchase History should do the trick. From there, look for “Set budget” and enter a dollar amount before tapping Save. The next time you purchase an app, movie, book, song, or any other item with your account, you’ll see a message letting you know if you’re getting close to (or are over) your budget.

Setting a Play Store budget won’t prevent you from actually buying items that take you over your preset limit, and Google says budgets can only be set in the currency of your current Google Play country profile. To see if you’re nearing your self-imposed cap at any time, simply return to the Purchase History screen. To remove a budget you’ve previously set, tap the “Remove budget” button from that same screen.

A Google spokesperson told VentureBeat that the feature is currently being tested, and it appears to be a staged rollout. On this writer’s Pixel 3 XL, the Play Store app has an Order History tab instead of Purchase History, and the “Set budget” button is nowhere in sight.

Budgeting builds on Google’s existing purchasing controls, which allow users to require authentication (like a password or fingerprint) for all purchases made through a Google Play account on a device, or to disable purchases entirely. Meanwhile, Google’s Family Link lets family managers within a group manually review and approve (or deny) members’ Play Store spending.

Apple previously offered a budgeting feature — iTunes Allowances — that allowed parents to set up monthly credit for kids to spend on App Store and iTunes purchases. The company discontinued it in May 2016 in favor of Family Sharing, a program akin to Family Link that enables parents to control purchase and spending habits across family members.

Overspending on virtual goods has caused quite a stir in recent years, particularly in cases that involve kids. Five years ago, the U.S. Federal Trade Commission required Apple and Google to issue millions of dollars in refunds to parents whose kids made unauthorized in-app charges, following a similar arrangement with Amazon. According to a report by the Center of Investigative Reporting, some Facebook employees internally refer to users who spend thousands of dollars on games and apps as “whales” — casino lingo for high rollers.