Heavily funded mobility startup Lime has announced plans to let its users book electric scooters up to 15 minutes in advance.

The San Mateo-based company, which recently raised a whopping $310 million at a $2.4 billion valuation, is piloting the new reservation feature in a handful of markets around the world, including Brisbane (Australia), Tel Aviv (Israel), and Lyon (France). It hasn’t said when it will expand the offering to other regions.

To use the new feature, which is only available in the iOS app for now, users need to tap on their desired scooter on the map, hit the reserve button, and then ensure that they unlock the scooter within the 15 minutes. During this period, the reserved scooter will not show up for other users in the Lime app, and no one else will be able to unlock it. 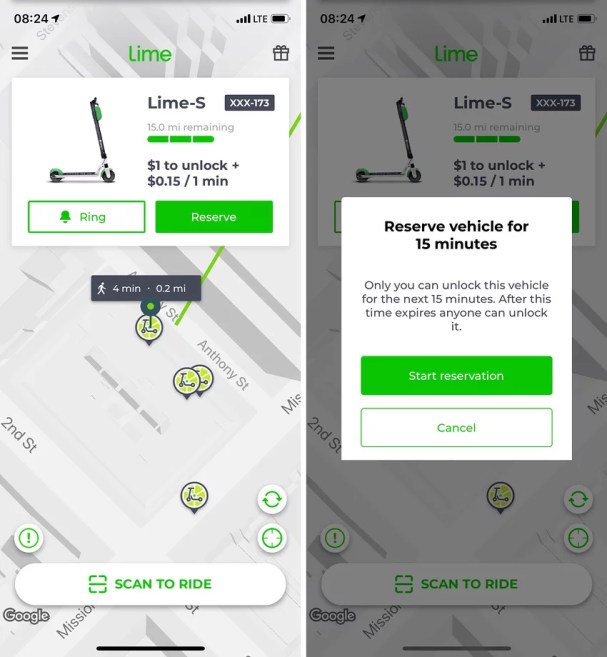 Above: Lime pilots reservation feature for electric scooters in some markets.

During the beta period, billing will only begin when the person who has made the reservation unlocks the scooter, though the announcement seems to suggest that there may be an additional charge when — or if — this feature officially rolls out more widely.

Electric scooters emerged as one of the big breakout trends of 2018, and 2019 is already shaping up for more of the same. Besides Lime’s recent raise, which took its total funding to more than $760 million since inception two years ago, Bird raised another $300 million at a $2 billion valuation, while Sweden’s Voi Technology nabbed a further $30 million.

Lime rebranded from LimeBike last year to highlight its focus on multiple mobility options, including electric bikes and car-sharing. But it is scooters that have taken cities around the world by storm, with Lime now operating in dozens of conurbations across the Americas, Europe, the Middle East, and the Asia-Pacific region.

Being able to reserve a scooter is an incremental upgrade on the surface, but it makes the service more reliable for the end user — there is nothing more annoying than planning a journey around a scooter that’s located a few blocks away, only to discover that someone else has nabbed it before you got there. This feature makes the Lime service just that little bit stickier — if a user can guarantee that there will be an available scooter, they are more likely to use the service regularly.