Wing’s drone delivery service is one step closer to becoming a reality stateside, thanks to approval from federal regulators. The Alphabet X lab graduate announced this morning that it has been certified by the U.S. Federal Aviation Administration as a small-sized air carrier, which will enable it to kick off drone deliveries from local merchants in the Virginia towns of Blacksburg and Christiansburg within months.

That unique classification — which was initially created to cover traditional charter flights — will allow Wing to charge for service and paves the way for expansion to additional U.S. cities. Under current drone-specific regulations, companies can’t exact payment for deliveries over distances beyond a human operator’s line of sight.

“It’s an exciting moment for us to have earned the FAA’s approval to actually run a business with our technology,” CEO Ryan Burgess told the Washington Post, adding that the “very rigorous and very thorough” FAA certification process took months and required Wing to produce manuals, training routines, and a safety hierarchy. “In the short term, you look at what people do every day, especially people with really busy schedules or parents with young children who have a lot of demands on their time … [Getting] a healthy meal delivered, hot and fresh, in just a few minutes, can make a pretty transformative impact in quality of life.”

Earlier this year, Wing became one of the first companies to launch a commercial drone delivery service after Australia’s civil aviation authority, Civil Aviation Safety Authority (CASA), granted it approval following more than four years of testing, 70,000 flights, and 3,000 deliveries. Around 100 homes in the suburbs of Crace, Franklin, and Palmerston have access to the service currently, and if all goes well, it will expand to customers in Harrison and Gungahlin. 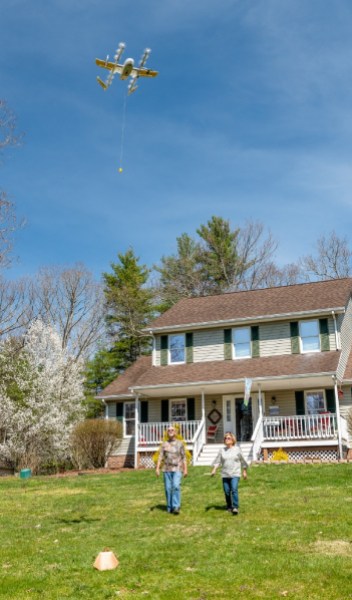 Current-gen Wing drones can fly at speeds of up to 78 miles per hour and take off and land vertically, thanks to a dozen vertical rotors and two propellers. Automated flight-planning software determines their route, while a downward-facing camera and other onboard sensors help them avoid obstacles.

Despite these bumps in the road, Wing is intent on forging ahead. Burgess recently announced it would launch a free 10-minute drone delivery trial in Helsinki, Finland for items weighing 3.3 pounds or less up to a distance of 6.2 miles. Flight trials began earlier this year in Tampere and continued through the winter.

Alphabet is not the only company field-testing autonomous delivery drones, of course. Amazon launched a trial of Prime Air in the U.K. in December 2016. These drones delivered orders during the day, seven days a week, to shoppers who lived within a few miles of the retailer’s fulfillment center, near Cambridge.

In the intervening years, companies like Microsoft and startup Flytrex have trialed airborne delivery services in cities like Holly Springs, North Carolina and Wichita, Kansas. In May, Uber announced plans to deliver food by drone in San Diego, and FedEx plans to develop a drone-powered aircraft inspection program in Tennessee. More recently, Matternet teamed up with UPS to launch an aerial delivery service from WakeMed’s flagship hospital and campus in Raleigh.