Unlike competitors Verizon and T-Mobile, AT&T hasn’t been shy about pushing the pricing envelope for 5G services, and the company is already planning to roll out a new pricing model over the next few years. During a Q1 2019 earnings call today, AT&T executives offered precious little insight into their 5G plans, except to predict that 5G services will start to be segmented into speed tiers, mirroring the way broadband service is typically sold today.

The reason for that change, suggested AT&T CEO Randall Stephenson, is that some broadband customers are willing to pay premium prices for higher speeds, and — unlike 4G networks — 5G can deliver speed differentiations.

On the 5G piece … I will be very surprised if as we move into wireless, the pricing regime in wireless doesn’t look something like the pricing regime you see in fixed line. If you can offer a gig speed, there are some customers that are willing to pay a premium for 500 meg to a gig speed, and so forth. So I expect that to be the case. We’re 2-3 years away from seeing that play out.

Stephenson explained that AT&T’s initial 5G customers are exclusively businesses for the moment — likely because of the company’s limited 5G hardware and service offerings. And AT&T’s already seeing 5G replace fixed broadband for these customers, using nothing more than a wireless router. But over the next year or so, he said, the router could become unnecessary as AT&T devices get their own 5G modems, enabling users to have direct and persistent 5G connections in their handsets, tablets, and laptops.

AT&T could be particularly challenged by consumer pricing expectations in the 5G era as rivals move to simple “unlimited” plans. Third-place carrier T-Mobile has committed to keeping its unlimited 5G pricing the same as its affordable 4G pricing, while first-place carrier Verizon has added a small $10 surcharge for unlimited 5G service. Neither has set limits on their 5G service speeds.

As of now, AT&T is offering a limited 5G data plan with 15GB of service for $70 per month, without speed limits or guarantees. The carrier has suggested that it is using this plan to gauge initial market demand and will update its pricing and service offerings for 5G smartphones at some point this spring. 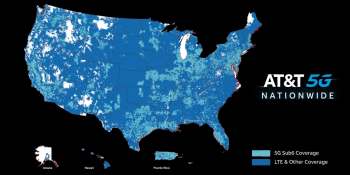