Gaana, India’s biggest music-streaming service, today announced that it is introducing videos to its app and offering artists more listener data as it races to attract both users and talent and widen its market dominance.

The eight-year-old service, owned by conglomerate Times Internet, also revealed that it has amassed 100 million monthly active users, up from some 80 million announced in December of last year. Gaana CEO Prashan Agarwal claimed that his app is about 1.4 times bigger than that of the company’s closest rival (JioSaavn) in terms of data usage. According to estimates from third-party research firms, JioSaavn has about 25 million monthly active users.

The first feature, dubbed Gaana Video, will showcase made-for-mobile, vertical videos from India’s top music artists, the company said. Agarwal added that the videos will be exclusive to the platform.

The new video offering comes as Gaana pushes to differentiate its service from a growing army of rivals. It currently competes with Spotify, which launched in India earlier this year; Apple Music; and Google’s Play Music and YouTube Music, in addition to other local players, such as Airtel’s Wynk and Reliance Jio’s JioSaavn. 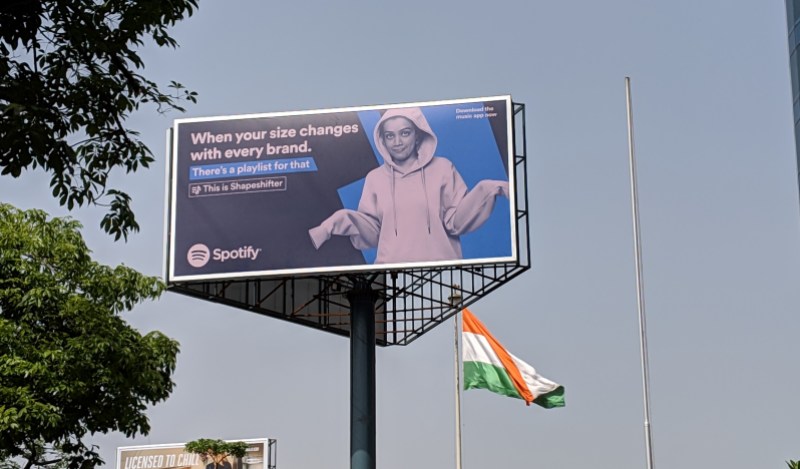 Above: Spotify, which entered India in March this year, gained a million new users in three days.

All of these services are aggressively priced. While many, including JioSaavn, Airtel Wynk, and Spotify, offer a free, ad-supported tier to users, those that serve an ad-free premium service still price their offering at less than $2 a month. If that didn’t make India’s music streaming service landscape tough enough, all of these services carry roughly the same set of 40 million tracks.

India has emerged as one of the largest markets for music streaming in recent years. About 150 million users in India regularly access music streaming services, research firm Counterpoint told VentureBeat. In a report (PDF) published earlier this year, Deloitte and recording industry body IMI estimated that the Indian music market generated $130.7 million in revenue in 2017.

To differentiate their platforms, music-streaming giants in India are increasingly trying to secure rights to exclusive content, such as recordings from concerts and podcasts. Gaana says it has considerably expanded its library of regional songs in recent years, with tracks in more than 30 Indic languages. The company also built a voice search assistant to help users find songs. (In India, people search for songs by looking up the names of actors who starred in a movie.) The company says about 24% of its users leverage this feature.

Today, Gaana is also launching Artist Dashboard to help artists identify which of their songs are gaining traction. “The data is directly and automatically available for all artists, allowing them to see up-to-date statistics on their consumption and to better understand how, where, and when their music is being consumed,” the company said. The dashboard will also include demographic data, allowing artists to see where their fans live. Musicians can use this information to schedule a concert in that city, for instance. It’s a feature that other music streaming services in India don’t have, Agarwal claimed.

Gaana, which raised $115 million last year from Chinese internet giant Tencent and others, monetizes its platform through ads and a subscription plan. The service is not profitable and burns tens of millions of dollars each year in licensing tracks from music labels (this is not unique to Gaana, of course), two people familiar with the music app’s finances told VentureBeat.

A significant percentage of Gaana’s user base live in small cities and towns, which limits advertising revenue. Gaana said its usage grew most in these areas last year, though it did not share how many paying customers it has. In an interview with VentureBeat, Agarwal admitted that advertising alone, which at the moment generates half of the company’s revenue, is not enough. Agarwal said the service will now try to entice existing users to start paying.

He added that this year Gaana will introduce several premium tiers for users, including more affordable options. For instance, he said, if a user does not want the exclusive content Gaana has to offer but is interested in unlimited downloads — or is interested in an ad-free experience — they will be able to select plans with those niche features. The company hopes to reach 600 million active users in three years, he added.

An additional challenge in the market comes from YouTube, which most users in India gravitate toward when they want to listen to music, according to Nielsen. YouTube reaches about 250 million users per month in India, its fastest-growing market. Indian music label T Series, which publishes its music tracks on YouTube, is the largest channel on the platform globally. Agarwal said he views YouTube as a marketing platform that Gaana already uses to promote new albums.