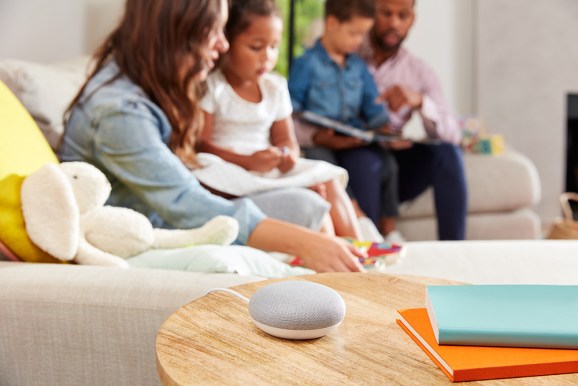 Have you heard? This Saturday is Tell a Story Day in the U.S. and U.K., an unofficial holiday dedicated to conjuring up tales and reading books together with friends, family, and loved ones of all ages. To help get folks in the spirit, Google’s bringing Tell Me a Story, a Google Home smart speaker feature that reads aloud stories from popular franchises like Teenage Mutant Ninja Turtles and Blaze and the Monster Machines, to Android and iOS devices via Google Assistant.

Starting today in English in the U.S., U.K., Canada, and Australia, and India, parents and kids can ask Google Assistant “Hey Google, tell me a story” or “Hey Google, tell me a bedtime story” to hear over 20 stories like Little Red Riding Hood, Sleeping Beauty, Goldilocks, The Tired Alien, The Chef Who Loved Potatoes, and The Cat’s Elopement. Note that you’ll need to have the latest version of Google Play Books for Android or iOS installed.

“Whether you’re on the way to school drop-off or waiting for soccer practice to start, you can hear [fully narrated] stories,” wrote Google Assistant product manager Eric Liu in a blog post. “No matter where or how you choose to read or listen to a story, the Google Assistant can lend a helping hand.”

Tell Me a Story’s smartphone debut comes roughly two years after its launch on Google Home and a year after audiobooks came to Google Assistant. In English in the U.S., Australia, Canada, and Great Britain, you can queue up or preview narrated books from Google Play by saying a command like “Hey Google, read Charlotte’s Web” or “Hey Google, read The Hero’s Guide to Saving Your Kingdom.”

In a related development, Google last October teamed up with Disney and Penguin Random House for a read-along app that paired the latter’s Little Golden Books series with music and ambient noise. Saying “Hey Google, let’s read along with Disney” within earshot of a Google Home speaker kicks off the app’s voice recognition feature, which matches sound effects to key points in Disney children’s books like Coco, The Three Little Pigs, Alice in Wonderland, Cinderella, Peter Pan, Toy Story 3, and Ara the Star Engineer.

Google isn’t the only one catering to kids with audiobooks and narrated stories, of course.

When connected to Kindle or Audible accounts, Amazon’s Alexa assistant can play both audiobooks and books that lack professional narration. (Amazon last year announced that it would make more than 1,000 kid-friendly titles available through its FreeTime Unlimited program, which lets parents pay around $2.99 per month to provide their kids access to curated content.) And earlier this year, Audible and ChooseCo collaborated on new choose-your-own-adventure audiobooks for kids, including The Abominable Snowman and Journey Under the Sea. Both are available for free via Vermont-based ChooseCo’s Choose Your Own Adventure skill on Alexa-powered devices such as Amazon’s Echo lineup, and offer a collective 65 different endings determined by decisions made throughout the course of each chapter.