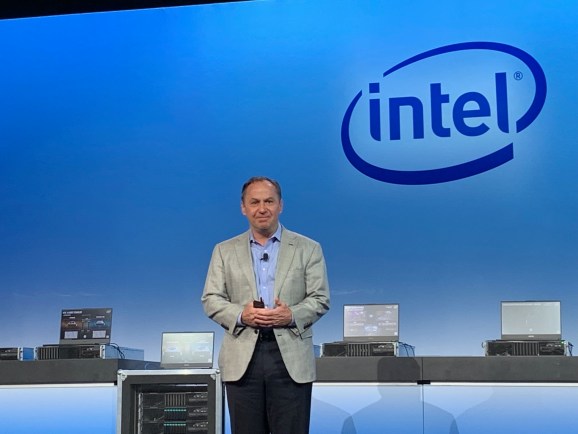 Bob Swan is CEO of Intel.

Intel slightly beat Wall Street’s expectations for the first quarter as the company reported earnings of 17 cents a share on revenue of $16.1 billion.

For the period ending March 31, analysts had expected Intel to report non-GAAP earnings of 89 cents a share on revenues of $16.03 billion.

The results come after the big chip maker announced its exit from 5G smartphone modems. Apple and Qualcomm resolved their legal differences, and that prompted Intel’s exit, as Apple was Intel’s major 5G potential customer.

But Intel continues to focus on the “data-centric” strategy, with chips for PCs and datacenter processing as demand grows for everything from internet of things devices to self-driving cars.

Intel is the sole supplier of iPhones’ modem chips, but the 5G transition was difficult and Qualcomm is ahead of the competition.

Overall, revenue was flat compared to a year ago, with “data-centric” revenue down 5% and PC revenue up 4%.

“Results for the first quarter were slightly higher than our January expectations. We shipped a strong mix of high performance products and continued spending discipline while ramping 10nm and managing a challenging NAND pricing environment. Looking ahead, we’re taking a more cautious view of the year, although we expect market conditions to improve in the second half,” said Bob Swan, Intel CEO, in a statement. “Our team is focused on expanding our market opportunity, accelerating our innovation and improving execution while evolving our culture. We aim to capitalize on key technology inflections that set us up to play a larger role in our customers’ success, while improving returns for our owners.”

In the first quarter, the company generated approximately $5.0 billion in cash from operations, paid dividends of $1.4 billion, and used $2.5 billion to repurchase 49 million shares of stock.

The PC-centric business (CCG) was up 4% in the first quarter due to a strong mix of Intel’s higher performance products and strength in gaming, large commercial, and modem. Intel’s first high-volume 10-nanometer processor, code-named Ice Lake, remains on track to be in volume systems on retail shelves for the 2019 holiday selling season.