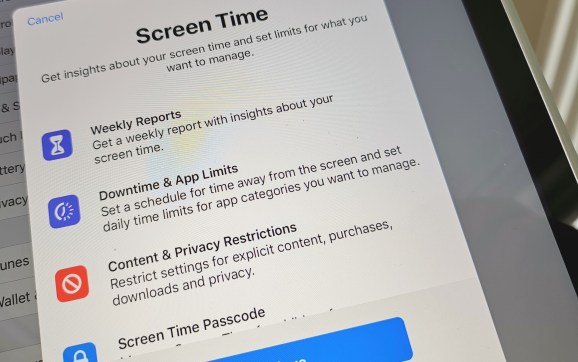 When Apple rolled out a new tool back in September to help users manage their iPhone addiction and parents control their kids’ device usage, it was generally received as a good thing.

Arriving with the launch of iOS 12, Screen Time, as the feature is called, tells users which apps they use most frequently and the number of push notifications they receive from various apps, among other device-monitoring data. Screen Time also allows parents to manage their kids’ iOS device usage, including setting time limits for specific apps — crucial amid growing concerns about the impact technology is having on children’s development.

Apple, however, wasn’t the first company to serve users — including parents — with the tools to manage and monitor time spent on mobile devices. A New York Times‘ report over the weekend found that Apple has “removed or restricted” at least 11 out of the 17 most-used screen-time tracking apps on the App Store over the past year. The timing of this crackdown, as Apple pushed its own Screen Time tool, was of particular note, though Apple claimed it was entirely coincidental — explaining that it removed rival apps or requested changes to limit the amount of data they’re able to garner from users’ devices.

Compared to Android, Apple has traditionally been more stringent about the level of device access third-party apps have, but according to an expanded statement issued by the Cupertino company, a number of parental control apps have been using what is known as mobile device management (MDM) technology to gain deeper access to mobile devices.

“We recently removed several parental control apps from the App Store, and we did it for a simple reason: They put users’ privacy and security at risk,” the statement read.

MDM has become increasingly popular in the enterprise as a way for companies to maintain control over their workers’ devices remotely, and Apple has for some time allowed its own enterprise clients to use it. Apple said it started “exploring the use of MDM by non-enterprise developers” in early 2017, though it apparently updated its guidelines in mid-2017 to state that consumer app developers were not to use MDM technology.

It incredibly risky — and a clear violation of App Store policies — for a private, consumer-focused app business to install MDM control over a customer’s device. Beyond the control that the app itself can exert over the user’s device, research has shown that MDM profiles could be used by hackers to gain access for malicious purposes.

Referring to the parental control apps it has removed or restricted, Apple’s statement notes that it “became aware” over the past year that several of these apps were using MDM technology. Apple’s App Store has a fairly strict approval process, so it’s a little surprising to think it wouldn’t know what level of access these apps employed.

Last month, Russia-based security software company Kaspersky revealed that it had filed an anti-trust complaint in Russia after Apple banned its Safe Kids app following the launch of Apple’s own Screen Time tool. “Apple had never before had any issues with Kaspersky Safe Kids; the app had been hosted in the App Store, meeting all of the guidelines, for nearly three years,” Kaspersky’s complaint noted.

Apple is already facing anti-competition complaints in Europe from Spotify, which argues that Apple exercises an unfair advantage because it controls the platform (iOS) and the App Store through which it charges Spotify (and similar services) a 30% commission on subscriptions. Apple Music, of course, isn’t faced with such a levy and thus can charge its customers less.

The big difference between Apple Music and parental control apps, of course, is that Apple doesn’t sell Screen Time as a service — it’s a feature that’s baked into iOS devices, one that the company makes no direct revenue from.

So could Apple really be purging third-party iPhone addiction/parental control apps because they’re “competing” with its own feature? That is certainly the argument developers are making, and it will be up to regulators to decide whether Apple’s stated reasons — privacy and security — are legitimate.

“Apple has always supported third-party apps on the App Store that help parents manage their kids’ devices,” Apple said. “Contrary to what the New York Times reported over the weekend, this isn’t a matter of competition. It’s a matter of security.”