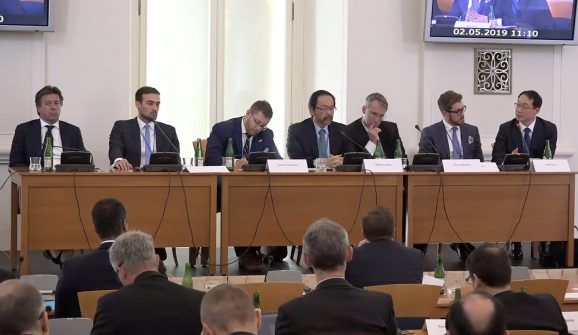 Nearly a year and a half after U.S. officials raised serious concerns regarding the security of 5G hardware from Chinese vendors Huawei and ZTE, government officials and telecommunications experts from across the globe gathered in the Czech Republic to develop common plans for 5G network security. China and Russia notably weren’t invited.

Hosted by the Czech government, the Prague 5G Security Conference sought to establish a foundation of trust between the telecom chiefs of 32 countries, including nations from North America, Asia, and Western and Eastern Europe, as well as Australia and Israel. In recent months, the leaders and telecom ministries of individual countries have reached varied conclusions regarding Chinese networking hardware within their 5G infrastructures, so the conference aimed to share best practices on developing secure 5G networks — an issue that is expected to impact the countries’ militaries, intelligence-sharing efforts, and critical infrastructures over the next decade.

While the conference was Czech-sponsored, the U.S. reportedly sought to use it as an opportunity to pitch allies on its latest approach, which emphasizes strict network security rather than bans on specific companies. The strategy, which was embraced by several countries prior to the Prague event, recommends that governments adopt 5G network standards Huawei can’t meet, due to Chinese laws requiring its cooperation in intelligence-gathering efforts.

Some officials noted that they were not in a position to agree to a formal, binding document, due to the nascent state of 5G security discussions and networks in their countries. But participants agreed that they were meeting at the right time — before their networks were built with insecure parts.

In day one remarks, U.S. FCC chair Ajit Pai told attendees that 5G security decisions “need to be made with the long term in mind,” rather than trying to save money on cheap components, as 5G will have a “transformational impact” on “our militaries, our industries, our critical infrastructure (from ports to electric grids), our entrepreneurs, and much more.” The event was closed today by European Union commissioner Věra Jourová, who spoke about the EU’s need to get cybersecurity right from the start and to maintain it over time.

Though the event’s working group discussions were confidential, participants offered public summaries in English-language videos (day one and day two) that are now available online. In addition to their focus on 5G, attendees tackled broader cybersecurity risks, during a time when Russian interference with elections and social networks has reached a historic peak.