Twitter today announced plans to build “the next generation of the Twitter API” that will provide more flexibility and better serve developers. As a first step, the company is launching Twitter Developer Labs, a program to let developers preview new features and test new API products before they are finalized. Participating developers will be asked to provide feedback on what they like and don’t like ahead of the broad rollout.

Twitter announced Twitter API version 1.1 in August 2012. The social network and what developers use it for have changed a lot since then. Twitter has added enterprise data APIs and the Ads API, but the main API has largely stagnated. At the same time, Twitter has burned developers again and again.

The company now insists it wants to simplify its services for developers, make them easier to use, and offer more features. The Twitter Developer Labs program is the first step, so developers can test new API endpoints and be part of the process.

“We know that we have to rebuild trust with some groups of developers, and that we have to maintain trust with everybody building on our platform,” Twitter product manager Ian Cairns told VentureBeat. “And I think that the Labs program is a very clear, concrete example of how we intend to do that. By inviting them to give us feedback on what we’re building, and including their voices in the future of the platform.”

Twitter plans to “update significant portions of our existing API, and make some foundational changes like new data definitions and endpoint structures.” More specifically, the first new products that will be released in Labs are GET /tweets and GET /users. 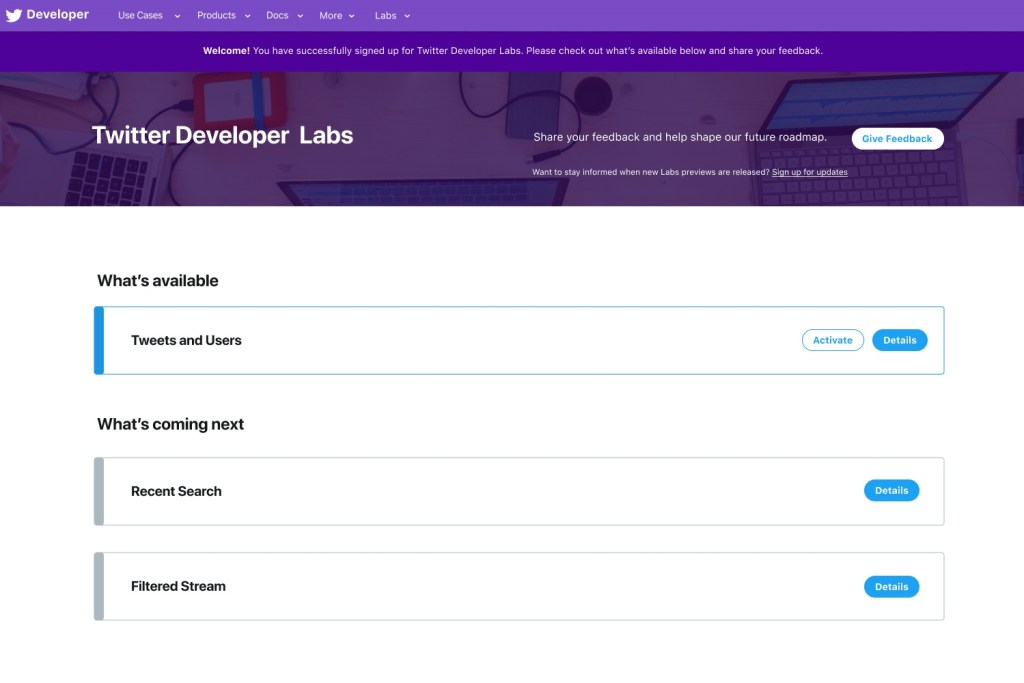 After that, Twitter will release new versions of functionality to filter and search tweets, and to get tweet engagement and impression metrics. Some examples of early Labs functionality will include:

“We believe developers help improve Twitter and strengthen the public conversation, and we want to help them succeed with their goals far into the future,” Cairns said in a statement. “Going forward, we want to make it easier for more developers to get started and grow with us, while continuing to provide a useful, open, and free API offering. We’re building the future of our developer platform with a diverse range of developers in mind.”

The term “diverse range of developers” spans everyone from students to researchers, Cairns clarified to VentureBeat. The program will initially focus on developers who work with conversational data. That includes academics who study Twitter, and analytics companies that build business products.

The Twitter API has been on version 1.1 for years even though it has undergone many changes. Twitter says it did so to maximize backwards compatibility and limit the changes developers had to make. While that allowed many applications to work for years without changes, it also resulted in a few challenges, including deprecated fields and features, holding back new features, and API responses growing too big.

Twitter promises not only to address these challenges with a new Twitter API version, but to also develop a versioning strategy “that’s predictable and more responsive to the needs of our developer community.” That includes “a reasonable timeframe for developers to make any changes,” though the company didn’t commit to a specific amount of time.

Twitter has chosen path versioning (specify a version as part of the endpoint URL) over header versioning (make a versioned or unversioned call). The company says path versioning is widely adopted, easy to implement for developers, and it’s what Twitter already uses in its other APIs. After launch, Twitter plans to make a major version change within its Labs program. Twitter will increment to a new Labs version after it incorporates developer feedback.

As for addressing increasing complexity, Twitter plans to formalize the behavior of its endpoints and adopt a consistent specification format. Twitter will use OpenAPI specifications to define and expose behavior for each new Labs endpoint. Because OpenAPI uses JSON Schema to specify response objects and data types, Twitter will take inspiration from there as well.

Due to privacy concerns, anyone who wants to participate in Labs will have to go through Twitter’s developer registration process. That means they will “experience the same level of accountability as with our other public APIs.”

Twitter will release the first endpoints to all eligible developers “in the coming weeks.” Since the endpoints coming to Labs are early previews, they may change before broad release — keep that in mind if you plan to build with them.