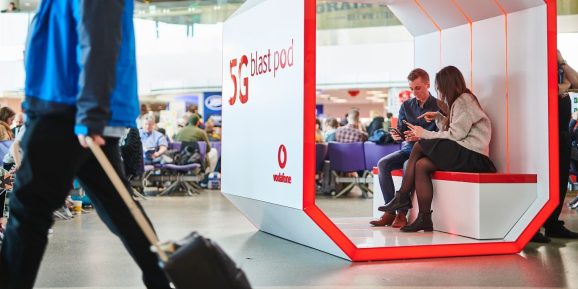 In separate announcements, British carrier Vodafone confirmed today that it’s almost ready to begin offering commercial 5G services across both the United Kingdom and Spain. The U.K. will see an initial seven-city rollout across London, Manchester, Liverpool, Birmingham, Cardiff, Bristol, and Glasgow on July 3, while Spain will have its own seven-city launch (via El Economista España) this summer across Madrid, Barcelona, Seville, Bilbao, Malaga, Valencia, and Zaragoza.

Vodafone’s U.K. launch plan is slightly different from what was originally expected this year. Last September, Vodafone used a 5G demo event to announce an October commencement of 5G tests across seven cities, with plans to launch live networks in London, Manchester, Liverpool, Birmingham, Cornwall, and the Lake District in 2019 and then expand to 1,000 sites by 2020. Now the company says it will launch its first seven sites in July, followed by Birkenhead, Blackpool, Bournemouth, Guildford, Newbury, Portsmouth, Plymouth, Reading, Southampton, Stoke-on-Trent, Warrington, and Wolverhampton before the end of 2019, bringing the 5G network’s total coverage area to 19 cities.

Additionally, Vodafone’s U.K. arm says that it will offer a “5G Gigacube” wireless router for home and business uses “this summer.” The fixed 5G device notably appears on the company’s site with Huawei branding and promises to let up to 64 Wi-Fi devices simultaneously access Vodafone’s 5G network.

Above: The “5G Gigacube” is a Huawei-built router for fixed 5G broadband.

While Vodafone isn’t exclusively relying on Huawei’s 5G devices for its U.K. rollout, it’s notably sourcing products from the beleaguered Chinese company, which has been accused of offering eavesdropping cooperation to China’s government. Despite reports that the U.K. had decided to indirectly block Huawei from providing 5G networking gear, officials have remained somewhat ambiguous on the topic rather than mandating an outright ban. It remains to be seen whether the U.K. government will express concerns over Huawei routers being used at data endpoints, such as homes and small businesses.

Vodafone is expected to offer 5G services in the U.K. and Spain for the same prices as its existing 4G plans, and it has been using novel base station antenna designs to expand its U.K. urban coverage. Pricing has not yet been announced for any of its 5G devices. The carrier also expects to introduce 5G roaming across the U.K., Germany, Italy, and Spain this summer.

Updated at 6:10 a.m. Pacific: This article has been updated with new details on Vodafone’s 5G launch plans for Spain.