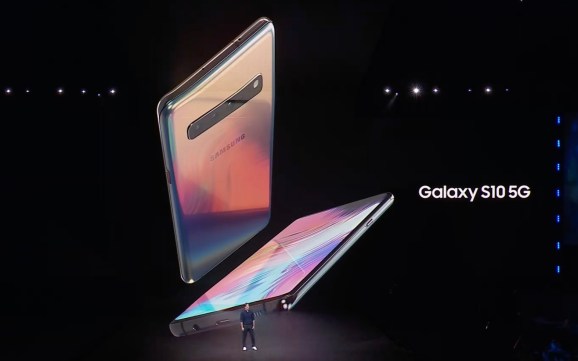 Advance leaks revealed most of the new Galaxy S10 lineup before Samsung’s Galaxy Unpacked event today, but one version — the Galaxy S10 5G — is decidedly unlike the others. It’s a little larger, considerably more powerful, and arriving later than the rest: late in the first half of 2019, which is to say June, several months after the other S10 models.

As its name suggests, the Galaxy S10 5G is the only version of the S10 with integrated support for next-generation 5G cellular networks, which are currently in embryonic states in the United States and South Korea. Samsung says that the S10 5G will support both millimeter wave (28GHz and 39GHz) and sub-6GHz 5G frequencies, but it’s unclear how its 5G and 4G performance will actually differ: The company is promising up to 2Gbps download and 150Mbps upload speeds even in the 4G-only versions of the S10.

The Galaxy S10 5G will debut in the United States exclusively for Verizon Wireless, then become available to other U.S. carriers in summer. In addition to AT&T, Sprint, and T-Mobile, Samsung says it will be offered on Spectrum Mobile’s and Xfinity Mobile’s shared networks, which have not yet announced 5G plans.

Because this model has to support Verizon’s high-speed, low-latency millimeter wave 5G network — and include the complex Qualcomm X50 modem and antennas required to connect to it — it’s no surprise that it’s physically bigger than all of the other Galaxy S10 phones revealed today. But it’s only a little larger in each dimension than the Galaxy S10+, measuring 77.1mm wide by 162.6mm tall by 7.94mm thick, which is 3 millimeters wider, 5 millimeters taller, and 0.14mm thicker.

The 5G version includes a 6.7-inch Infinity-O screen, up from the 6.4-inch display on the S10+, with a pixel density of 505ppi. Like the other S10 models, the screen is a new dynamic AMOLED with HDR10+ support, high color accuracy, and up to 1200 nits of brightness. It also has a relatively huge 4,500mAh battery inside, with 29 percent more capacity than last year’s S9+, and roughly 10 percent more than this year’s S10+. To keep it from spending ages on a charger, it will support super fast 25-watt charging.

While that big battery might suggest that the S10 5G will offer extended run times, the reality is that 5G phones will be simultaneously connected to 4G and 5G networks — initially using separate modems and antennas — which will drain power more quickly than 4G models. Though most of the other internal components will be identical to the other S10 models, the S10 5G’s larger screen will consume more energy.

You’ll be able to tell the 5G version of the S10 apart from its lower-end brethren in two ways. It will have a 5G logo on the back, as well as a line of four rear cameras, up from three rear cameras on the S10+. The S10 5G will share the S10’s rear 0.5X to 2X optical zoom range, thanks to the same array of three total 16MP ultrawide, 12MP telephoto, and 12MP wide-angle cameras, plus its front 10MP selfie camera.

But Samsung is giving the S10 5G’s front and rear cameras an extra boost: hQVGA-resolution 3D depth sensing capabilities. The rear will include a “time of flight” depth sensor that could be used to scan objects and people with the right software, while the front will be more like the iPhone X series’ TrueDepth camera, using 3D depth rather than RGB depth sensing to offer live photo and video background blurring, as well as AR effects.

Rumors that the 5G model might come only in a 12GB RAM/1TB storage capacity model turned out to be inaccurate. While the S10+ will be optionally available with that extra RAM and capacity, the S10 5G will come in a 256GB model with 8GB of RAM, and won’t include a micro SD slot for storage expansion. Pricing is not yet available, but it wouldn’t be a surprise to see it top $1,000 in the United States.

Most of the S10 5G’s other hardware will be identical to the other versions of the S10. In addition to using an in-screen ultrasonic fingerprint scanner, it will include Bluetooth 5 and Wi-Fi 6, Fast Wireless Charging 2.0 support, and either a Qualcomm Snapdragon 855 or Exynos processor, depending on the market. Either processor will be octa-core, with the former using a 7-nanometer process to offer a 1.7GHz to 2.8GHz range of speeds, and the latter a 8nm processor with a 1.9GHz to 2.7GHz range — faster at the low end, slower at peak.

Following the introduction of the tablet-phone hybrid Galaxy Fold, the Galaxy S10 5G is Samsung’s second confirmed phone to include 5G support. AT&T has said that it will offer two different Samsung 5G phones in 2019, the first in the “first half of 2019” or “spring,” and the second during the third quarter, though only the latter will support both AT&T’s 5G and 5G+ networks. While AT&T could be referring to the Fold and S10 5G, Samsung could also be readying a Galaxy Note 10 with a higher price point and larger screen size than last year’s Note 9.

Most of the European carriers have yet to actually announce live 5G service in their countries, but will likely provide more substantial timelines for their rollouts at next week’s Mobile World Congress in Barcelona.