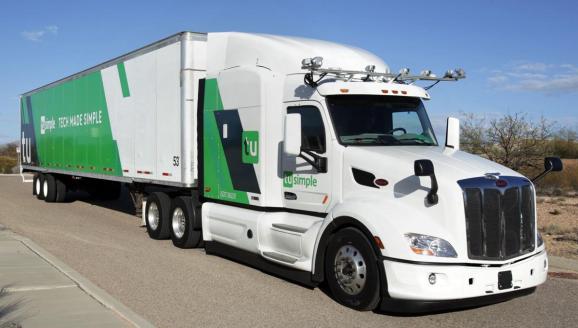 Self-driving vehicle startup TuSimple nabbed a notable new client recently: the United States Postal Service (USPS). This morning, the company revealed that the Postal Service has awarded it a contract to complete five round trips over the course of two weeks.

TuSimple’s driverless trucks will haul trailers more than 1,000 miles between the Postal Service’s Phoenix, Arizona and Dallas, Texas distribution centers, the company says, with a safety engineer and driver on board to monitor their performance. “It is exciting to think that before many people will ride in a robo-taxi, their mail and packages may be carried in a self-driving truck,” said president, founder, and chief technology officer of TuSimple Dr. Xiaodi Hou. “Performing for the USPS on this pilot in this particular commercial corridor gives us specific use cases to help us validate our system, and expedite the technological development and commercialization progress.”

TuSimple’s Class 8 semi-trucks are level 4 under the guidelines penned by the Society of Automotive Engineers (SAE), meaning they’re capable of full autonomy in controlled (and often geofenced) highways and local streets. Unlike self-driving perception platforms from the likes of Uber and Waymo, TuSimple’s is decidedly camera-forward: Using an eight-camera array and other sensors, it can detect cars, pedestrians, and other obstacles up to 1,000 meters away, even in inclement weather (but not at night). That’s compared to the roughly 250- to 300-meter range driverless systems dependent on lidar — i.e., laser-based sensors that bounce light off of objects to help map them digitally in three dimensions — are typically able to see.

TuSimple says its approach enables it to achieve three-centimeter precision for truck positioning even in inclement weather and tunnels, and allows for plenty of leeway in real-time decision-making. (It takes a truck 30 seconds to cover 1,000 meters.) It also claims better efficiency than its competitors; by keeping aware of traffic flow far ahead, TuSimple asserts that its trucks are able to maintain a given speed more consistently than human drivers and competing autonomous vehicle systems, cutting fuel consumption by as much as 15%.

It isn’t the USPS’ first foray into driverless car technology, interestingly. In 2017, a report published by the mail carrier’s Inspector General detailed the Postal Service’s plans to add semiautonomous mail trucks — dubbed Autonomous Rural Delivery Vehicles — to its 228,000-vehicle fleet as early as 2025. (The USPS intends to pilot 10 prototypes this year.) They’d drive themselves on 28,000 rural routes and free up the agency’s roughly 310,000 postal workers to sort and deliver packages, resulting in “small but cumulatively significant time savings,” according to the report.

The USPS has another motivation for pursuing self-driving trucks and delivery vehicles: cost savings. It lost $3.9 billion last year, the bulk of which went to prefunded retiree health care benefits. And three years ago, it paid about $67 million in repair and tort costs associated with vehicle crashes and $570 million for diesel fuel.

For much the same reasons, the Postal Service’s competitors are experimenting with autonomous delivery technologies of their own. Amazon unveiled Scout, a last-mile delivery robot, in January, and FedEx announced a comparable robot weeks later. Meanwhile, UPS is exploring drone delivery, most recently in North Carolina, where it teamed up with drone startup Matternet to ferry medical supplies from area hospitals.

As for TuSimple, which recently completed a $95 million series D financing round at a valuation of $1 billion, the USPS contract is another step toward widespread deployment of its self-driving vehicles. The company, which has R&D labs in San Diego and test operations facilities in Tuscon, is currently performing three to five fully autonomous, revenue-generating trips a day for over a dozen customers (including Fortune 100 companies and “household names”) on three (and soon four) different routes in Arizona, and will by June expand the size of its U.S. fleet from 11 to 50 trucks. It hopes to close out 2019 with a 200-truck fleet in the U.S. and a 300-truck fleet in China, which would make it the largest self-driving truck solutions company in the world.

TuSimple has plenty in the way of competition, like Thor Trucks, Pronto.ai, and Aurora — the last of which attracted a $530 million investment in February at a valuation over $2 billion. There’s also Ike, a self-driving truck startup founded by former Apple, Google, and Uber Advanced Technologies Group engineers that’s raised $52 million, and venture-backed Swedish driverless car company Einride. Meanwhile, Paz Eshel and former Uber and Otto engineer Don Burnette recently secured $40 million for startup Kodiak Robotics. That’s not to mention Embark, which integrates its self-driving systems into Peterbilt semis and which launched a pilot with Amazon to haul cargo, and driverless truck solutions from incumbents like Daimler and Volvo.

But TuSimple is slowly but steadily expanding its footprint. In the coming months, it’ll run a series of self-driving trucks for 22 hours each (including overnight) along the I-10, I-20, and I-30 corridors through Arizona, New Mexico, and Texas. TuSimple notes that the freight flowing along I-10 corridor accounts for 60% of the U.S.’s total economic activity, and says that it expects it’ll become a central route for its autonomous vehicles in the months ahead.

There’s a strong demand for driverless trucks. It’s an industry predicted to reach 6,700 units globally, totaling $54.23 billion this year, and one that stands to save the logistics and shipping industry $70 billion annually while boosting productivity by 30 percent. Besides cost savings, the growth is driven in part by a shortage of human drivers. In 2018, the American Trucking Associates estimated that 50,000 more truckers were needed to close the gap in the U.S., even despite the sidelining of proposed U.S. Transportation Department screenings for sleep apnea.