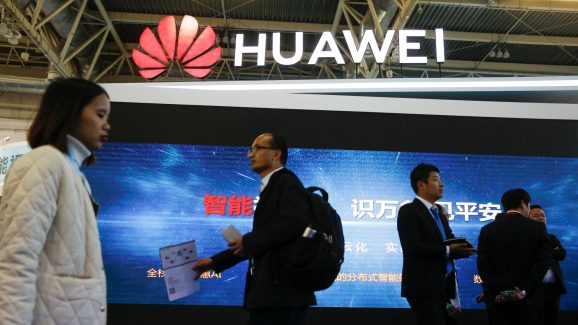 People walk past the stall of Huawei Technologies in Beijing, China October 23, 2018.

It’s too early to quantify just how much the U.S. ban on Huawei will hurt the Chinese telecom giant internationally, but if media reports from China can be taken seriously, the company might be able to make up its losses in its home country — damaging Apple’s shaky iPhone business there in the process. A report today in the South China Morning Post suggests that nationalism and user embarrassment are spurring some iPhone users to switch to Huawei phones, emotional responses that could disrupt years spent growing Chinese loyalty to Apple’s products.

Multiple Chinese publications have recently reported on the phenomenon, which began with scattered social media postings urging citizens to support Huawei at Apple’s expense in response to U.S.-China trade disputes. As the SCMP explains, a “nationalist rhetoric of ‘switch to Huawei’ has gained increasing traction as trade tensions escalate,” with Huawei-boosting Weibo posts netting tens of thousands of likes, alongside multiple public testimonials from recent Apple to Huawei switchers.

But the “switch” sentiments aren’t necessarily as polarized as one might imagine. Rather than calling for boycotts of Apple or tossing old iPhones into the trash, some long-time users are just framing Huawei purchases as acts of patriotism. Others admit to keeping iPhones as backups to their Huawei products — notably even including Huawei chair Ren Zhengfei.

Instead of trading on the nationalist fervor, Ren reportedly took a milder tone in a television appearance yesterday, specifically praising Apple’s value outside of China. “iPhone has a good ecosystem,” he said, “and when my family are abroad, I still buy them iPhones, so one can’t narrowly think love for Huawei should mean loving Huawei phones.” Ren also expressed gratitude to U.S companies and consultants that have helped Huawei’s development.

Apple’s dependence on China is well documented. While it has less than 10% market share in the country, Apple makes roughly 20% of its revenues and profits in China, the world’s largest market for smartphones. That large fraction of sales explains why Apple has accommodated government requests to compromise user data and block certain apps, enabling it to keep selling its products to Chinese consumers. Yet the developing market remains price-sensitive, a fact that hurt Apple’s 2018 holiday sales within the country and forced it to cut prices in an effort to reinvigorate demand.

Huawei’s dependence on American and allied businesses is becoming clearer by the day. Companies including Google and Arm have reportedly ceased cooperation with Huawei, depriving it of the software and hardware support it has relied upon to develop and sell consumer devices. As a result, carriers inside and outside the U.S. are now pausing plans to carry its 5G products. Huawei claims to be ready for the transition, but a similar ban on ZTE last year rapidly brought the smaller Chinese telecom company to the edge of a shutdown. It’s unclear how long Huawei will be able to hold out.

However, two advantages may enable Huawei to keep going. The company produces its own Balong series 5G modems, as well as Kirin mobile processors, so it doesn’t need to source those key parts from other companies. Additionally, the Chinese market annually sells between 400 million and 500 million smartphones, and Huawei led that market in 2018 with a 26.4% share, growing in the first quarter of 2019. China is about to experience a surge in new device demand due to recently announced 5G network launches. Following limited local rollouts, all three major Chinese carriers are now expected to launch “national” 5G services across 40 cities in October.

Huawei and a wide variety of smaller domestic Chinese smartphone makers will launch 5G devices this year to cater to that demand, enabling them to capitalize on early excitement for the high-speed technology. But Apple won’t, as it is reportedly planning to wait until next year to debut its first 5G phone.

While a refusal to carry Huawei 5G devices will reduce smartphone options for carriers outside of China, it may enable the company to redouble its efforts to build market share within its home country. In the meantime, Apple will need to find some way to justify the latest iPhones’ high prices to consumers inside and outside of China, despite the absence of key premium feature customers are expecting this year. As bad as things look for Huawei in the U.S. right now, its struggles here could lead to a reversal of fortune elsewhere, and it’s going to be fascinating to watch everything play out over the next year or so.