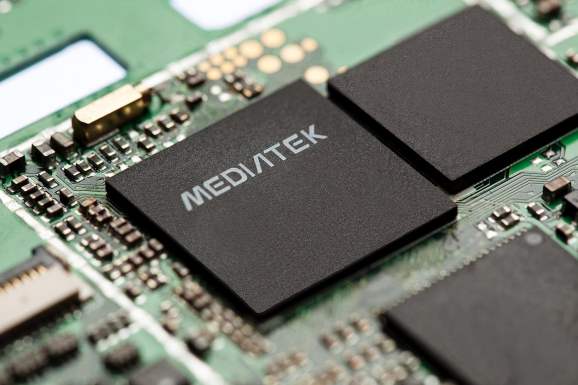 5G is here. That’s the assertion Taiwanese chipmaker MediaTek has been making for the better part of a year, and it’s less outrageous than it sounds. Early networks have already launched in the U.S., Austria, Italy, Switzerland, Uruguay, and South Korea, and the U.K.’s EE announced earlier this month that it’ll blanket select cities with 5G as soon as June. In fact, it’s not inconceivable that by the end of 2019, you’ll be able to get a 5G cellular connection somewhere on almost every continent.

Taking advantage of 5G’s lower latency and higher bandwidth requires handsets with compatible modems, however, and those remain somewhat elusive. Fortunately, MediaTek is on the case. Months after the company debuted a standalone modem in the M70 5G, a multi-mode chip that’s backward-compatible with 2G, 3G, and 4G networks, it today at Computex 2019 announced a high-end system-on-chip — aptly dubbed the 5G SoC — intended to compete with top-of-the-line offerings from Qualcomm, Samsung, and Huawei in the wireless devices market.

“We think that 2020 is going to be the year that 5G devices take off,” MediaTek’s general manager of corporate sales Finbarr Moynihan told reporters during a conference call last week. “Being at the start of the race is very exciting for us.”

MediaTek cut no corners in designing the 5G SoC, judging by the tidbits the company has provided so far. The wafer, which is manufactured on a 7-nanometer FinFET process, is the first to market with Arm’s Cortex-A77 processor core architecture and Mali-G77 graphics chip. Toward that end, MediaTek says the 5G SoC offers both “unrivaled” performance compared with its predecessors and “ultra-low power” capabilities.

The 7-nanometer Cortex-A77 — “Deimos” — boasts a 20-35% performance boost over the preceding Cortex-A76. It’s 20% faster in single-threaded tasks as measured by Geekbench 4, and while energy efficiency remains the same as the A76, the A77 has a higher bandwidth, a 50% increase in decoder width from 4-wide to 6-wide), a new integer ALU pipeline, and revamped load and store queues.

Elsewhere, the A77 packs in a 64KB L1 instruction and data cache, 256 and 512KB L2 caches, and up to 4MB in shared L3 cache, plus an additional integer ALU. Data prefetchers have been improved over the A76’s implementation, and additional prefetching engines have been added to improve accuracy.

For its part, the Mali-G77 is the first GPU in Arm’s Mali lineup with a new architecture — “Valhall” — since the Mali-G71’s Bifrost architecture in 2016. Arm says it delivers a 30% increase in overall performance, a 30% uptick in energy efficiency, a 60% improvement for AI and machine learning workloads, and up to 40% better peak graphics performance. In fact, the company says that the Mali-G77 can do the same work in half the energy of the Mali-G72.

That’s all thanks to the Mali-G77’s new energy-efficient superscalar engine, a simplified scalar ISA with a compiler-friendly new instruction set, dynamic instructions scheduling, and more. The Mali-G77 features 16 wide-warps, 32 lanes (two clusters of 16 FMA per execution engine), and one engine per shader core for roughly 33% more compute in the same area than the Mali-G76. As for the Mali-G77’s quad texture mapper, it delivers four texels per cycle, or two times the throughput of the Mali-G76 and four times the throughput of the G72.

With respect to AI workload acceleration, the 5G SoC is predictably no slouch — it features APU 3.0, the third generation of MediaTek’s multicore AI processing unit. Much like the neural processing engine in Samsung’s Exynos 9820 and the Neural Network Processing Unit in Huawei’s Kirin 980, the APU is designed to speed up tasks like facial recognition, human pose detection, object and scene identification, and even augmented reality (AR) and virtual reality (VR) apps and games (including Google Lens).

“The combination of the dedicated acceleration [cores] and the high-performance CPUs and GPUs [will result in a] significant bump in performance for the overall processing of AI and machine learning applications,” said Moynihan.

Those performance benefits extend to image processing and post-processing, MediaTek says. The 5G SoC supports up to 4K video encoding and decoding at 60 frames per second, and cameras with “super high-resolution” 80-megapixel sensors.

So what about 5G? Well, thanks to the integrated 5G modem’s support for New Radio (NR) 2 Component Carrier (which aggregates two 5G carriers together to increase performance), MediaTek is claiming maximum throughput of 4.7Gbps download and 2.5Gbps upload on both standalone and non-standalone networks. (According to Moynihan, the modem is functionally identical to the Helio M70 MediaTek demonstrated at Mobile World Congress in February, which ran at 4.2Gbps data speeds in real-world tests.)

That’s on sub-6GHz radio frequencies rather than the millimeter wave 5G frequencies that are already being used in 5G networks in the U.S., it’s worth noting. Still, it’s not unreasonable to expect latency in the sub-10ms to the sub-1ms range (compared with 4G’s 20-70ms of latency).

Elsewhere, the 5G SoC supports LTE and 5G dual connectivity (EN-DC) with dynamic power sharing, and it’s compatible with all TDD and FDD band frequencies. Other spotlight features include dynamic bandwidth switching technology that’s said to improve power efficiency by up to 50%, and full compliance with the 3GPP Rel-15 specification.

MediaTek expects the first 5G SoC customer samples to be available in Q 2019, with commercial devices packing the chipset to follow in Q1 2020.

“With this announcement, we’re very excited that MediaTek is going to be powering the first wave of really high-end 5G smartphones,” said Moynihan. “[We’re bringing] 5G capability into higher-tier platforms and higher-tier devices than you’ve seen [from us] in the past, and this will be the first step on the journey that we continue to move on with our core mission of bringing these technologies [and] solutions … to everybody.”