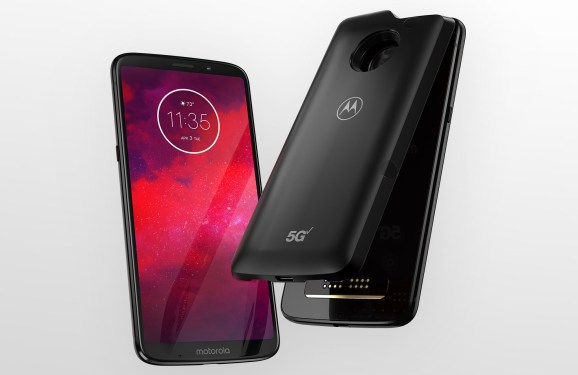 Though South Korea’s government expected its three cellular carriers to be the world’s first to offer commercial 5G services with smartphones based on the 3GPP’s official 5G standard, Verizon today launched its mobile 5G network ahead of schedule — a win for the U.S. company as it sought to establish further global 5G bragging rights.

“Verizon customers will be the first in the world to have the power of 5G in their hands,” said Verizon CEO Hans Vestberg. “This is the latest in our string of 5G firsts. Verizon launched the first commercial broadband 5G service last October, Verizon 5G Home, and now we’re lighting up our 5G Ultra Wideband network in Chicago and Minneapolis, providing the world’s first commercial 5G mobile service with a 5G-enabled smartphone.”

Verizon originally scheduled the launch of its mobile 5G network for April 11 with plans to offer Motorola’s Moto Z3 and 5G Moto Mod as the first commercial smartphone. The launch covers parts of only two U.S. cities — Chicago and Minneapolis — but will enable customers to use unlimited 5G data in those cities, falling back to 4G or sub-4G speeds outside covered areas.

South Korea has twice attempted to establish bragging rights as the world’s first country with commercial 5G networks. Last December, the country launched what it said was commercial 5G service, though its carriers had no 5G smartphones or consumer service plans to sell. This week, after 5G smartphone and plan approval delays, the country corralled its carriers and Samsung to launch actual 5G service plans and phones for customers — starting Friday, April 5.

Sensing opportunity, Verizon said today that it moved up the launch by a week, giving its customers “first time ever” access to “a commercial 5G network with the world’s first commercially available 5G-enabled smartphone.” Verizon says customers “should expect typical download speeds of 450 Mbps, with peak speeds of nearly 1 Gbps, and latency less than 30 milliseconds,” with network advancements coming throughout the year.

For now, the Moto Z3 is Verizon’s only 5G option, and the carrier is currently offering it for only $10 per month over 24 months if purchased with a new line, or with an online upgrade. The carrier has promised to offer 5G in 30 U.S. cities this year, and has unlimited 5G plans ranging from $85 to $105. All of the plans have unlimited 5G, but differ in how much 4G/LTE and tethering data users get before they’re subject to “data de-prioritization.”