If you ask Motorola, people love Moto Mods — the doodads that magnetically affix to the back of handsets in the Moto Z lineup. In fact, the company claims the majority of its customers would recommend handsets with Moto Mods, and it pegs the Z series’ satisfaction rate at over 80%. Perhaps it’s not surprising, then, that Lenovo-owned Motorola is doubling down on what’s working.

On the eve of the series’ fourth birthday and following a year that saw its mobile business achieve profitability four straight quarters in a row, Motorola is launching a new model — the Moto Z4 — with upgraded cameras, an edge-to-edge screen, and a battery that lasts up to two days on a charge. The Moto Z4 doesn’t exactly come as a surprise — leaks leading up to today’s announcement and a premature Amazon listing let the cat out of the bag. But it packs enough in the way of surprises to warrant a closer look.

The Moto Z4’s brushed metal body feels smooth and substantial in-hand, if not exceptionally ergonomic or palm-fitting. Motorola has the no-frills look down to a science, and this year’s iteration is machined from P2i splash-proof (but not waterproof) nano-coated Series 6,000 polished aluminum, with a flatter profile than rivals like the Google Pixel 3a and OnePlus 6T. That’s just fine in our book, given the constraints at play; ditching the Z series’ aesthetic would have no doubt meant fragmenting the Moto Mods ecosystem, and it’s to Motorola’s credit that it put compatibility before style.

This is all to say that the Moto Z4 won’t seem completely foreign to those who’ve owned or handled a Moto Z3. On the front, Gorilla Glass 3 shields the 6.39-inch display and its rounded corners. The screen measures a full 0.38 inches wider diagonally than the Z3’s screen and packs slightly more pixels at a Full HD+ 2,340 x 1,080 resolution (403 pixels per inch) compared with 2,160 x 1,080 (402 pixels per inch). The flavor is OLED with a 19:9 aspect ratio and a “micro-notch” that gives the Moto Z4 an 85% screen-to-body ratio, with a bezel that’s slightly thicker than that of, say, the Pixel 3a. It’s particularly noticeable where the glass curves to meet the frame’s lip near the USB 3.1 (Type C) port, but considering that the Moto Z3 had even thicker bezels and a 77.6% screen-to-body ratio, it’s not a hard pill to swallow. 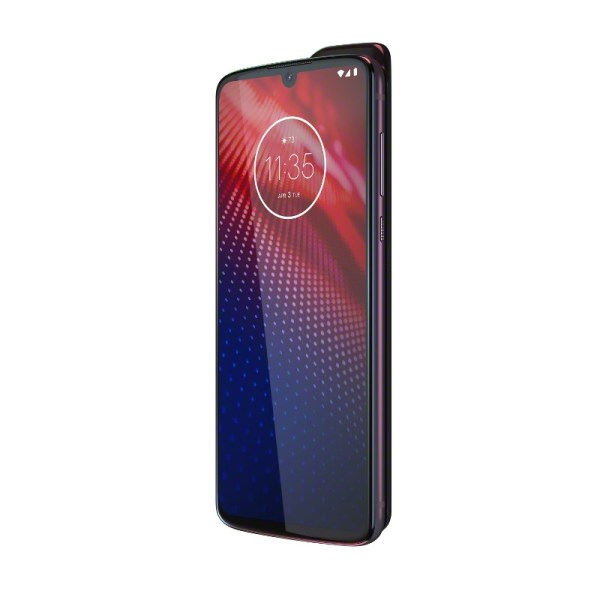 Speaking of the notch, it’s right beneath the earpiece and houses a 25-megapixel front-facing camera, and it’s flanked up top by a loudspeaker to the left and a SIM card slot to the right. Fans of the enduring 3.5mm headphone jack will be pleased to hear it’s present and accounted for — opposite these accoutrements and adjacent to the USB-C port, on the bottom, where it sits inches from the proprietary 16-pin Moto Mods connector on the rear cover.

The back is otherwise mostly barren, save for an embossed Motorola logo and a prominent round camera module jutting out from the top. There’s a 48-megapixel camera inside — quadruple the megapixel count of the Moto Z3’s rear sensor, for folks who are counting — accented by a fractal etching that glitters and gleams in the light and accompanied by a laser autofocus sensor and a dual LED flash.

Worth noting is the optical fingerprint sensor embedded beneath the Moto Z4’s screen, which stands in for the Moto Z3’s side-mounted fingerprint scanner.

So what about the cameras? Well, the Moto Z4 takes a cue from Huawei’s Honor View20, with a 1.6um pixel size, 48-megapixel (f/1.7 aperture) sensor that’s the largest ever in a Z series phone. Why so large? Motorola is using a pixel binning technique — Quad Pixel — that combines the electric charge from adjacent CMOS pixels to produce “super-pixels” that Motorola claims improve light sensitivity by a factor of four. The camera is optically stabilized and boasts phase detection autofocus and laser autofocus, along with with the aforementioned dual LED flash module to light up dim rooms and dark nights.

The Moto Z4 certainly isn’t wanting for shooting options, if that’s your thing. You’ll find augmented reality stickers within its bespoke camera app, plus a shortcut to YouTube Live, a panorama mode, Cinemegraph (which animates part of a picture while the rest remains still), Spot Color (which turns backgrounds black and white), and Google Lens integration. 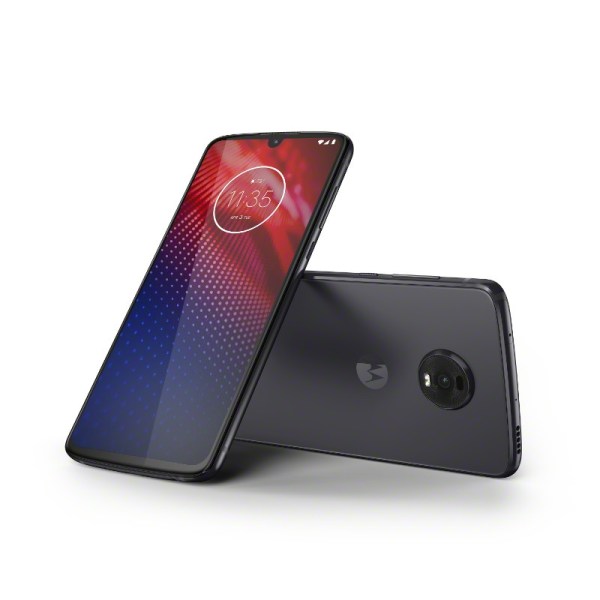 The Moto Z4’s selfie camera has its own bag of in-app tricks, including a Portrait Mode with adjustable bokeh (the effect that blurs out backgrounds while keeping the foreground in focus) and a Group Selfie mode that stitches peripheral photos together to capture a wider-angle shot. Also on tap is a Face Beauty feature that blurs out wrinkles and blemishes more or less convincingly, and Active Photos, which saves a short clip of the moments leading up to and following a snapshot.

On the video side of the equation, the Moto Z4’s rear and front cameras shoot up to 4K at 30 frames per second and 1080p at 30 frames per second, respectively. But if plain footage doesn’t suit your fancy, the rear-facing camera supports both a Timelapse mode that captures and stitches frames captured in quick succession (4, 8, 16, or 32 frames per second), and Hyperlapse, which snaps sped-up motion timelapses.

Under the hood of the Moto Z4 is a Snapdragon 675, an octa-core processor built on an 11-nanometer LLP paired with 4GB of RAM and 128GB of storage (expandable up to 512GB via microSD card). It’s the same system-on-chip as inside midrange phones like Vivo V15 Pro, Samsung’s Galaxy A70, and Motorola’s own Moto P40, and while it doesn’t pack anywhere near the punch of newer chipsets like the Snapdragon 730G or 855, it’s an upgrade from the Moto Z3’s Snapdragon 835 processor, which was a generation old when that phone debuted. 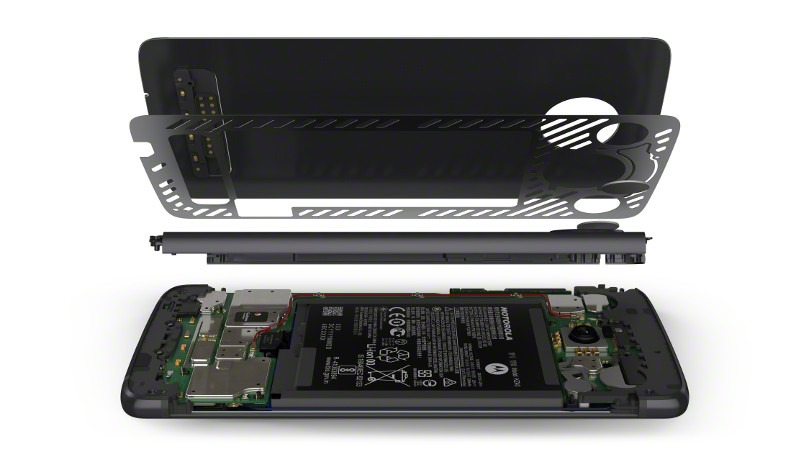 In Geekbench 4, our benchmarking suite of choice, the Moto Z4 scored 2,389 single-core and 6,440 multi-core. Unsurprisingly, that’s far short of flagships like the LG G8 ThinQ, which achieved a multi-core score of 3,458 in our testing, and the V40, Vivo Nex S, Samsung Galaxy S9, and Galaxy Note9. Beyond synthetic benchmarks, the Moto Z4 feels sluggish. Apps hesitate before launching, particularly when several are running at once, and while we’ve no complaints about touch latency or scroll lag, random app crashes, inexplicable stuttering in the camera app, and hitches in the home screen’s transition animations put a damper on the software experience. For now, we’re chalking it up to prerelease firmware.

The battery should be less disappointing, fortunately. Motorola has stuffed a non-removable 3,600mAh power pack inside that it claims lasts up to two full days on a charge and that is compatible with its 15W TurboPower (9V / 1.67A) fast-charging tech, which fully recharges the Moto Z4 in “minutes.” The added cell capacity necessitated a slightly chunkier battery compartment, Motorola says — 7.35mm compared with the Moto Z3’s 6.8mm — but if you ask us, the tradeoff is well worth it.

Capable hardware is nothing without great apps to match, and fortunately Motorola delivers the goods. Its skin atop Android 9.0 Pie is closer to stock than most, excepting a few genuinely useful touches, like an updated one-button navigation mode that replaces the on-screen navigation buttons with a narrow strip.

Motorola’s handy Moto Display and Moto Actions save time by condensing multiple steps into single taps and swipes. Both allow you to customize behavioral triggers such that the Moto Z4 can silence notifications and calls when it’s lying face down on a table or stop playing music when the screen dims. Attentive Display keeps the display on while you’re looking at it, and Peek Display — Motorola’s take on Android’s built-in Always On Display — surfaces notifications on the lock screen when the screen is switched mostly off.

The Moto Z4 recognizes a number of gestures designed to launch apps more quickly than you’d be able to with taps and swipes, like a double twist of the wrist that launches the camera and a chopping motion that switches the camera LED on or off. There’s also Face Unlock, which automatically unlocks the device using photo recognition when you lift the camera up to your face, and “pick up to silence,” which silences the ringer when you lift the phone to your ear.

We’d be remiss if we didn’t mention Moto Mods, of which there are more than a dozen in all. Among the fourth generation is a snap-on camera that captures 360-degree views of scenes. A refreshed Moto GamePad controller is optimized for popular titles like Fortnite, and the Moto Smart Speaker, which adds hands-free Amazon Alexa capabilities to any Z series smartphone, has been upgraded via a software update with support for Alexa Calling, enabling you to call Alexa-to-Alexa contacts and most mobile and landline numbers (in the U.S., Canada, and Mexico). 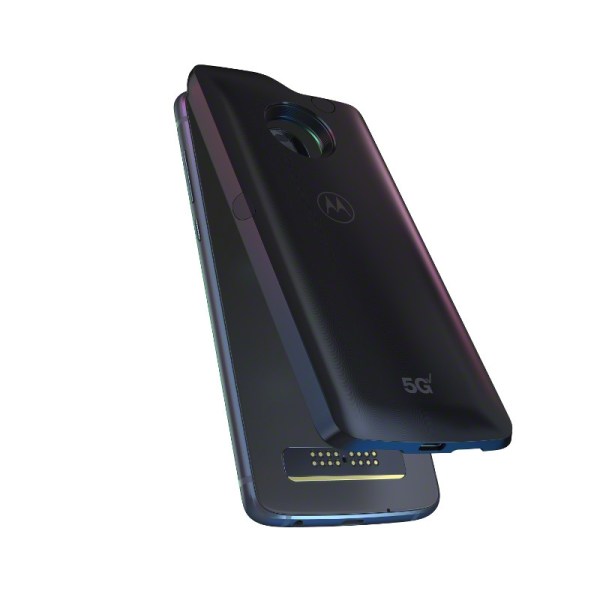 The Moto Z4 is fully compatible with the $350 ($199 for Verizon customers on a device payment plan) 5G Moto Mod introduced last year, which adds compatibility with Verizon’s small-but-growing 5G mobile network. (It’s currently live in parts of Chicago and Minneapolis.) It contains two separate Qualcomm modems — the 5G-capable Snapdragon X50 and the cutting-edge 4G Snapdragon X24 — along with a Qualcomm Snapdragon 850 processor and 10 new antennas designed to deliver 2 to 5 times the stock Moto Z4’s peak LTE data speed. The company is promising up to 5Gbps speeds over 5G and 2Gbps speeds over a 4G LTE-Advanced connection, the latter a fallback when 5G towers aren’t available.

In related news, Motorola says that it will bring compatibility with the 5G Moto Mod to the Moto Z2 Force later this year. 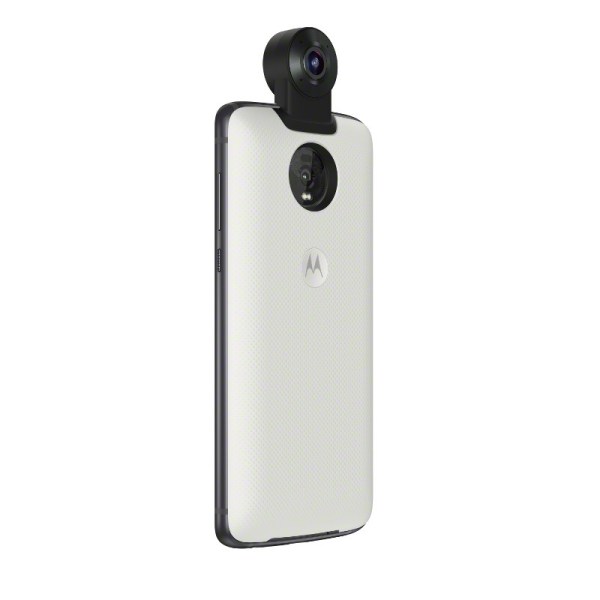 In the U.S., the Moto Z4 will be available at Verizon in one color — flash gray — on June 13, and in a frost white color later this summer, starting at $499. Verizon is offering customers the Moto Z4 on a payment plan, starting at $240 ($10 per month for 24 months) with new activations for a limited time.

For the unlocked crowd, the Moto Z4 be available at Best Buy, B&H Photo, and on Amazon.com starting June 6, bundled with the Moto 360 camera Moto Mod for $499. For a limited time, Verizon’s 5G Ultra-Wideband service is included at no additional charge for Moto Z4 on Above Unlimited and Beyond Unlimited plans.

In Canada, the new Moto Z4 will be available later this summer.