When Huawei released its P20 series of phones last year, I spent several weeks testing the P20 Pro and found the three-camera system to be “mind-blowingly awesome.”

I offered the asterisk, however, that I was reviewing it as someone whose main phone was an iPhone 5, built in the digital paleolithic era. So a cardboard Kodak camera might arguably have felt like an upgrade to me.

Having already driven the P20 Pro around the block, my response after a few weeks using the Huawei P30 Pro that was unveiled in March is enthusiastic, even if it didn’t make my head explode this time. (And it turns out I wasn’t alone last year in raving about the P20 Pro’s breakthrough camera prowess.)

In comparison to the P20 Pro, the P30 Pro is not such a radical leap forward. But Huawei still managed to pack in some improvements that resulted in even more staggering photos. The phone is not available for direct sale in the U.S. from carriers. But where I live in France, the 128GB version retails online for €999.

The camera array is once again designed in partnership with Leica. Huawei also counts a fourth camera, with the addition of the “Time of Flight” depth sensor. 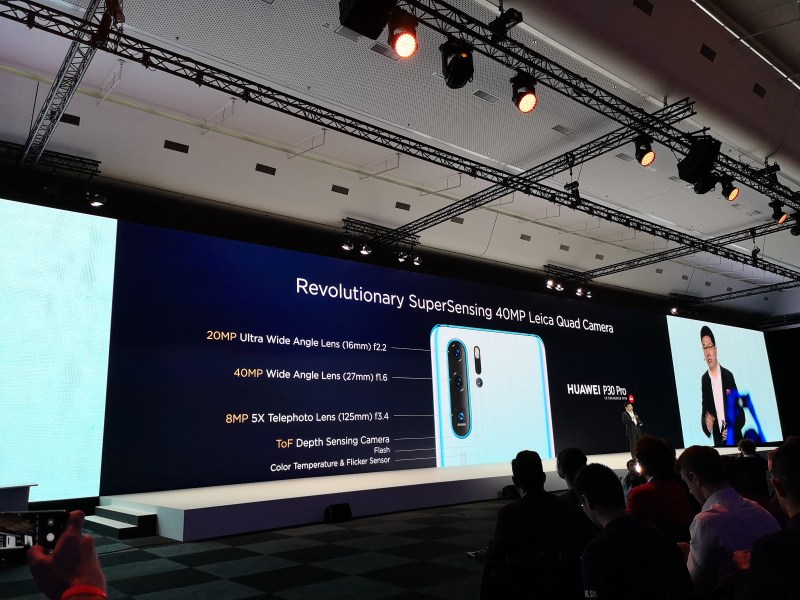 Above: Huawei’s flagship smartphone event in Paris back in March.

First, some notes about the camera improvements. You can read the spec breakdowns in greater detail here. But it’s worth highlighting that Huawei changed the color capture mode from the industry standard RGB to RYYB, replacing the green with two types of yellow. 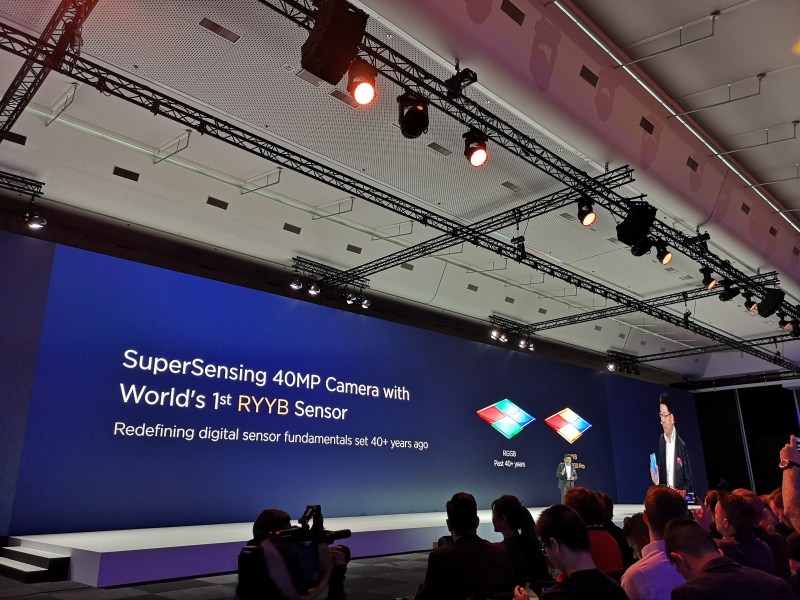 The company also came up with a clever hardware workaround involving placing an image sensor vertically within the phone and then using a mirror to reflect additional light into the lens.

The result of these changes, plus Huawei’s improved AI-driven software, is the ability to capture far more light and zoom to much greater distances. So while the P20 Pro has a max ISO of 102400, the P30 Pro boasts an ISO of 409600. 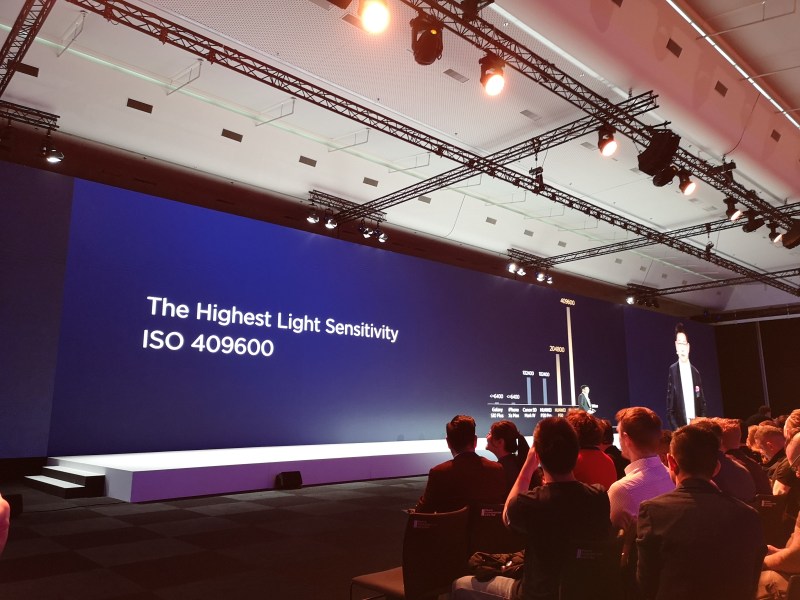 The result? Photography site DxOMark, which does detailed technical breakdowns of cameras, rated the Huawei P30 Pro the best smartphone camera in the world.

I wouldn’t argue. If not exactly a revolution, the P30 Pro still left me in awe, largely thanks to three key factors.

For my money, this is still the biggest deal on these phones, as it dramatically improves photos in extremely low light. But I found myself using it frequently even in daytime settings, when the angle of the sun cast shadows that the phone simply erased.

Here is a photo taken inside a Gascony church in France using just the basic photo setting: 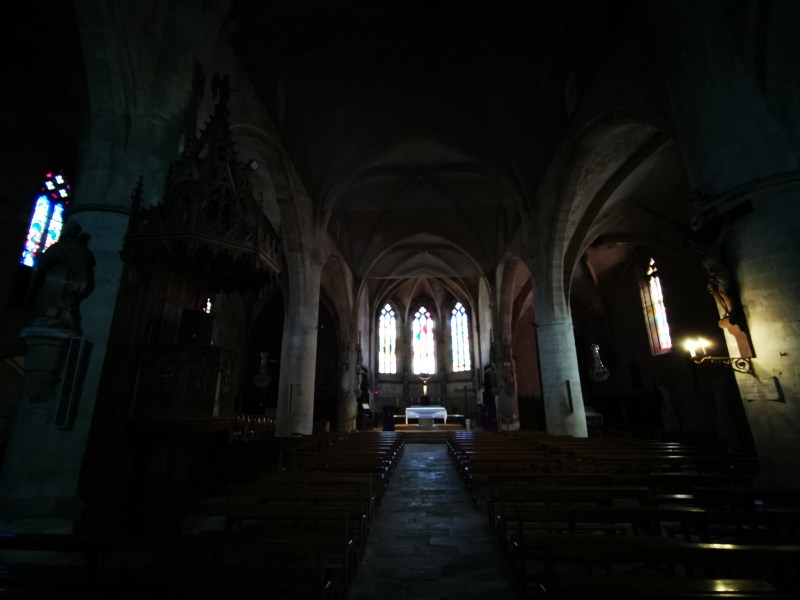 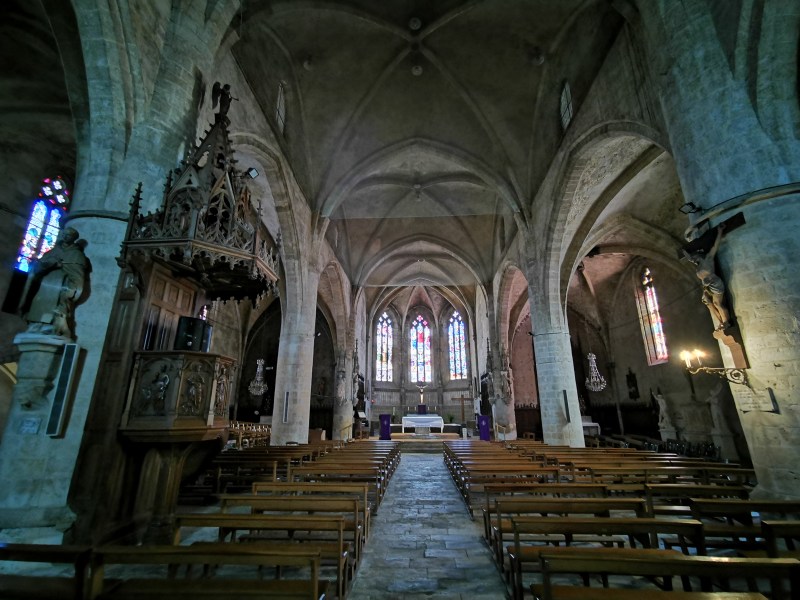 Huawei was able to demonstrate some almost-no-lighting examples on stage when it unveiled the phones. I wasn’t quite able to replicate that. But for me, these results yielded dozens of photos I could have never otherwise captured without lugging around a huge amount of lighting equipment.

Here is an example of the outdoor impact of Night mode. This is the Notre-Dame Cathedral in Bayeux, France shot with normal setting. It’s pretty decent: 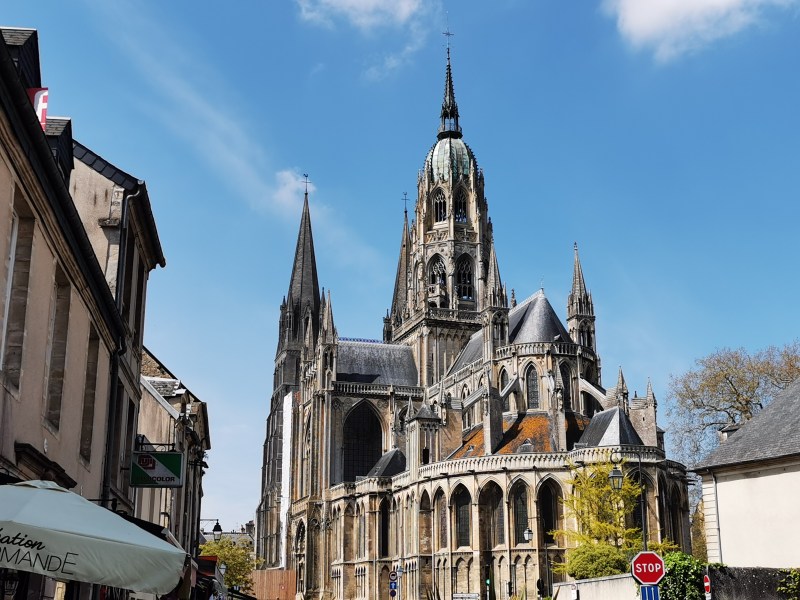 Here is the cathedral from the same spot taken in Night mode. The shadows are almost, though not entirely, gone: 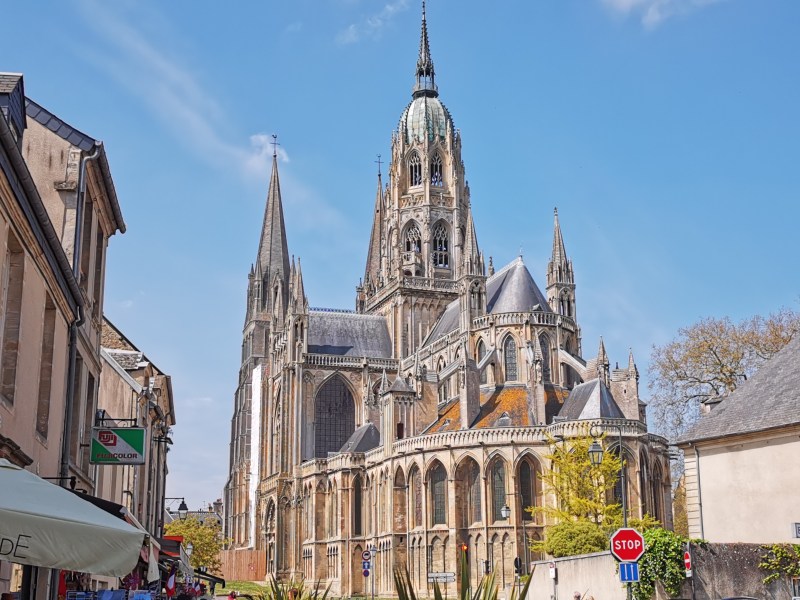 I’m cheating a bit by putting features two and three in the same section. But they are indeed related. The wide-angle option let me get a number of shots when I simply couldn’t move far enough away from the object.

At the same time, the zoom is also improved. While the P20 Pro offered clear resolution up to 3x zoom, the P30 Pro manages clear shots at 5x. Here’s an example of all of this at work in a series of photos I took of Notre Dame of Paris from a friend’s rooftop a few days after the fire: 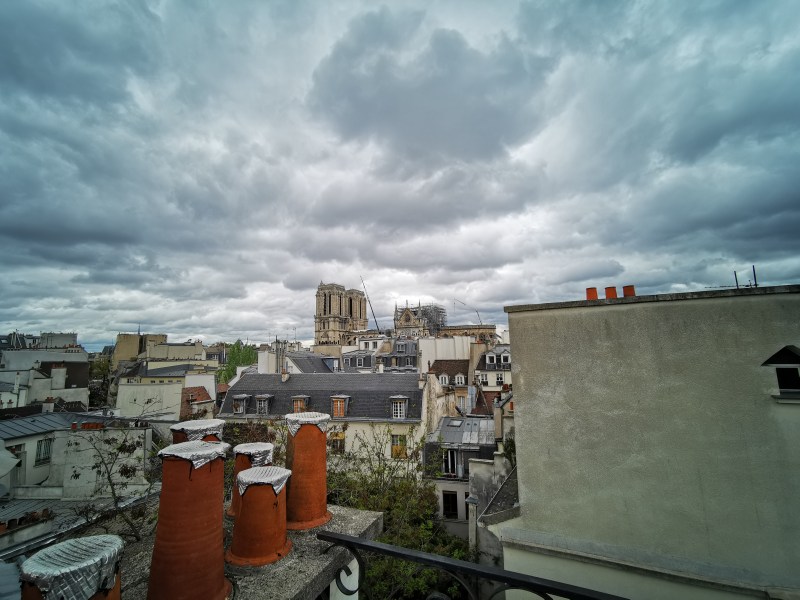 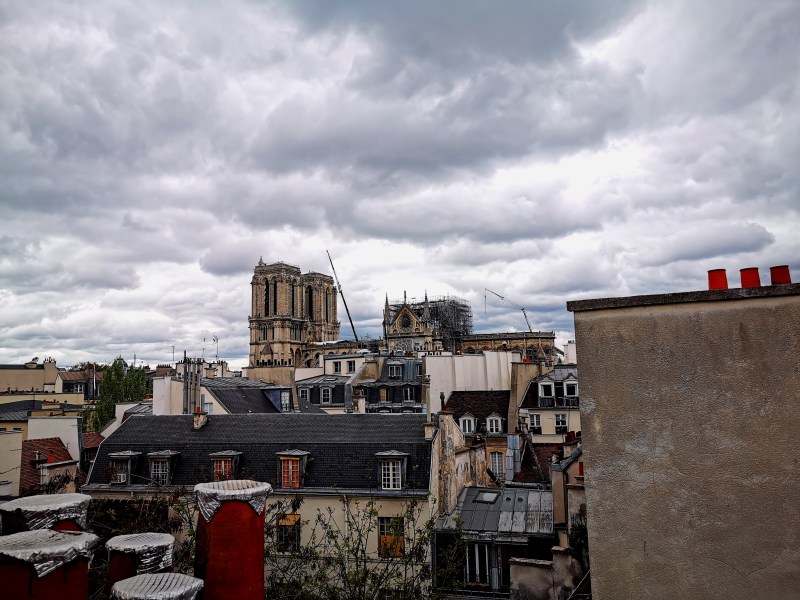 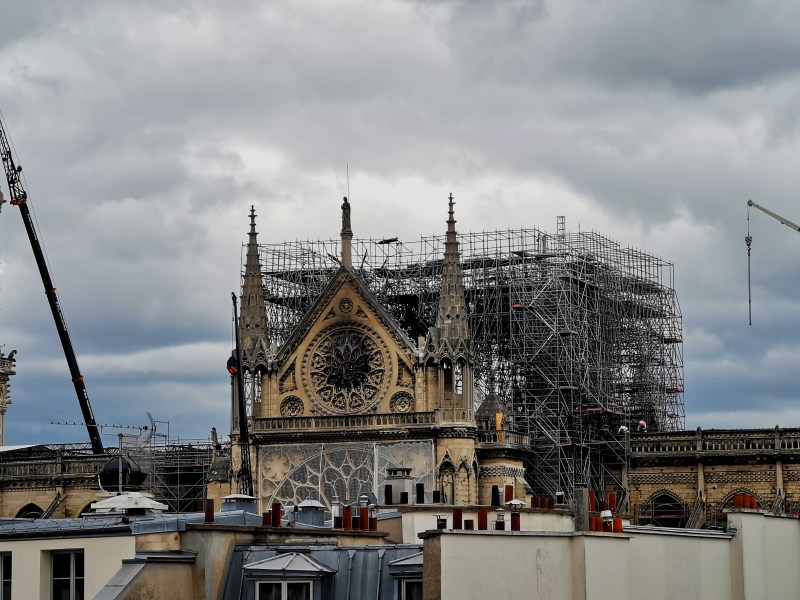 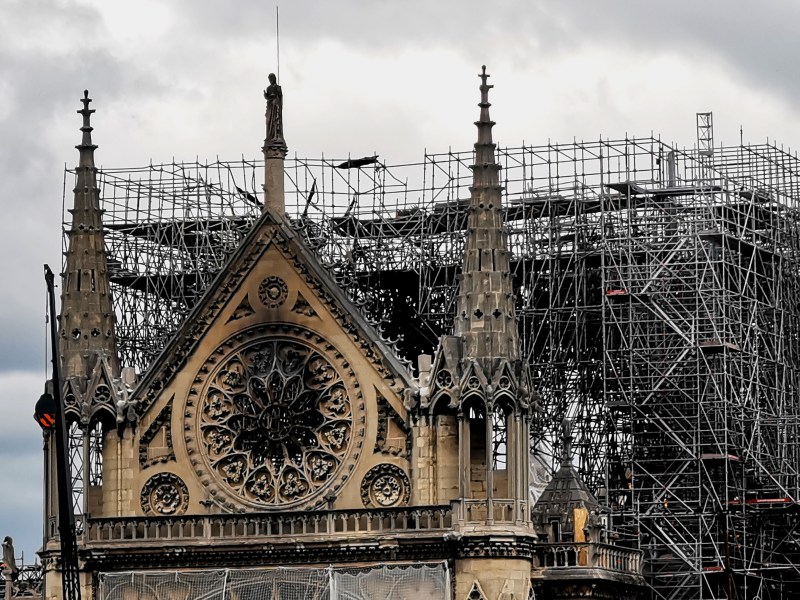 That last one is still pretty sharp, if not 100%. In any case, the resolution leaves me feeling like I can get a decent picture out of almost any situation. It’s nice to have that confidence and to be able to get this level of quality without feeling like I need to enroll in a degree program and start messing with the “Pro” settings.

And Huawei’s investment in R&D seems to be paying off. According to research firm IHT Markit, the company shipped 59.1 million smartphones in Q1 of this year, up 50% year-over-year. It’s pulling away from Apple to become the solid number two brand, and closing the gap with Samsung while being one of the few to show growth. Not bad for a company still shut out of the U.S. market.

How much further Huawei can take this down the road will be interesting to see. But for now the company can certainly boast of being at the head of the pack when it comes smartphone photography, a feature that has been a consistent winner with consumers.