Infineon Technologies has agreed to buy Cypress Semiconductor in a deal that values the chipmaker at $10 billion.

Infineon is paying $23.85 per share in cash ($10 billion enterprise value, counting debt) in addition to continuing its dividend through closing. That’s 55% higher than the stock price last week before the news started to leak.

This deal indicates a continuation of the trend toward chip industry consolidation — which has swallowed many Silicon Valley companies, from Altera to NXP.

The stock price represents an all-time high for Cypress, and it’s a nice way for a legendary Silicon Valley to go out.

Cypress was founded in 1982 by T.J. Rodgers, a brilliant chip engineer who helped the startup gain recognition for making a wide variety of memory, sensor, and internet of things chips as it grew to include thousands of employees. 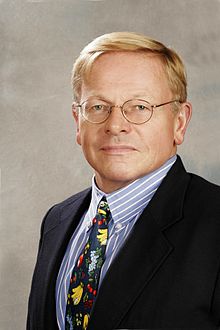 Above: T.J. Rodgers of Cypress Semiconductor

Early to recognize the value of improved solar cells made from silicon, Rodgers invested in SunPower in 2002 and helped it launch an initial public offering in 2005. Cypress got a big return on that deal.

Cypress was known for its larger-than-life founder, who said outrageous things like “real men have fabs” and was a smart and fiercely independent Libertarian. Regarding fabs, or wafer fabrication plants (chip factories), Rodgers was adamant that owning your own factory was the path to success in semiconductors. (That eventually proved to be wrong.)

He stepped down in 2016 but remained an activist shareholder within the company. He also set a personal goal of creating the best pinot noir in the world at his vineyard in the Santa Cruz Mountains. I walked through his vineyard once, when it was equipped with some of the earliest IoT monitoring equipment. We laughed as he told tales of getting the Cypress staff to (voluntarily) pick his grapes.

In the 1980s and 1990s, Rodgers was known as the toughest boss in Silicon Valley, always holding executives and employees accountable. He said he liked corporations to set “big, hairy, audacious goals” so they could achieve higher results.

At the time of the acquisition, Cypress was valued at 18.2 times NTM EBITDA ( a measure of profitability).

The companies expect the transaction to close by the end of 2019 or early 2020.