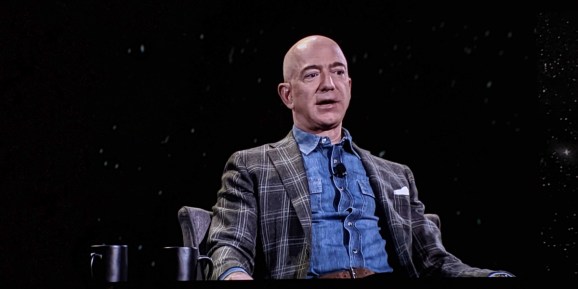 Today marked the end of Amazon’s inaugural re:MARS event in Las Vegas, where roughly 3,000 engineers, academics, programmers, astronauts, artists, entrepreneurs, and NBA players from over 40 countries gathered to glean insight from luminaries in machine learning, artificial intelligence, robotics, and space travel. It didn’t disappoint with respect to sheer breadth of content: Roughly 100 breakout presentations, workshops, and a technical showcase doomed this writer’s mission to cover everything on hand.

Robert Downey Jr., channeling his inner Iron Man, on Wednesday announced the Footprint Coalition, which seeks to significantly “clean up” the planet within the next 11 years. Rohit Prasad, Amazon VP and head scientist for Alexa, introduced Conversations, a deep learning-based way to create Alexa skills with multi-turn dialogue that can interconnect with other Alexa skills. Zoox CEO Aicha Evans detailed the hardware and software underpinning the company’s custom-designed and shuttle-like driverless vehicles. And that was just the tip of a rather large iceberg.

But what stood out most were perhaps the advancements in robotics and what they could mean for the workforce of the future.

During the first re:MARS keynote, Brad Porter, head of robotics at Amazon, unveiled two platforms bound for Amazon’s hundreds of fulfillment centers around the world. The first is Pegasus, an item-categorizing system that cuts down missorted goods by 50%. The other is Xanthus, a modular drive system that quickly adapts to new applications. Both make up a portion of the over 200,000 machines that now work alongside the 300,000 human workers in Amazon’s warehouses — up from 100,000 machines a year ago.

During that same keynote address, Amazon worldwide consumer CEO Jeff Wilke revealed a new six-propeller, electric, and fully autonomous Prime Air delivery drone that will soon begin delivering packages to customers as part of pilot tests. Amazon is aiming to fulfill deliveries of packages weighing up to five pounds within 30 minutes for shoppers who are within 7.5 miles (up to a maximum of 15 miles) of its warehouses.

And on the penultimate day of re:MARS, Amazon chief technology officer and vice president Werner Vogels highlighted RoboMaker, the company’s cloud robotics service designed to expedite developing, testing, and deploying intelligent machines at scale. “We’re now getting lots of attention and interest [in this],” said Vogels. “If we do this right, we will see the next generation of explorers working on the next generation of robotics technology.”

Amazon’s increased investment in robotics arguably began in earnest in 2012 with its $775 million acquisition of Kiva Systems, a Massachusetts-based company that manufactures mobile robotic fulfillment systems. That push has accelerated with Amazon’s recent purchase of Canvas Technology, a Colorado-based startup that is developing a fully autonomous cart system. Even more recently, in warehouses in Seattle, Frankfurt, Milan, Amsterdam, and Manchester, Amazon has doubled down on automation with $1-million-per-unit machines — CartonWraps and SmartPacs — capable of packing up to 700 products in an hour.

The moves are doubtless reducing operations costs — the savings with CartonWraps and SmartPacs are so substantial that each robot is amortized in less than two years. And they will likely further Amazon’s ambitious plan to reduce its free shipping option for all Prime subscribers from two days down to one.

But it’s a less encouraging development for the human workers whose jobs are at risk due to partial or complete automation.

A 2017 analysis published by Quartz found that Amazon’s investment in automation and robotic employees will cause the combined employment at the company and related retailers to decline by a net 24,000 in 2018. Separately, Forrester found that AI could eliminate 10% of U.S. jobs in the coming months, and in the past year, analysts at the World Economic Forum, PricewaterhouseCoopers, McKinsey Global Institute, and Gartner have predicted it could make redundant as many as 75 million jobs by 2025.

Amazon asserts that its robots are assisting rather than replacing human workers and points to its warehouses in places like Florence, New Jersey and Kent, Washington as prime examples. There, employees stock shelves with products robots then whisk away to ready for shipment, and humans — not machines — are responsible for putting products in the cardboard boxes customers ultimately receive.

“[These workers are] finding something, inspecting things, engaging [their] mind in a way that I think is important,” Amazon operations executive Dave Clark told the New York Times in an interview.

Reports lend credence to this idea. Gartner, for instance, anticipates that automation and robotics will create a net 500,000 jobs by 2020 and 2 million in the next five years. McKinsey forecasts that AI could contribute an additional 1.2% to gross domestic product growth (GDP) for the next decade and help capture an additional 20-25% in net economic benefits (equating to $13 trillion globally) in the next 12 years.

In Florence and Kent, no worker lost their job when robots were installed. But as Amazon continues to develop and deploy more capable machines — like Prime Air drones, delivery rovers like Scout, and warehouse packagers and sorters — it’s unclear if the pattern will hold.