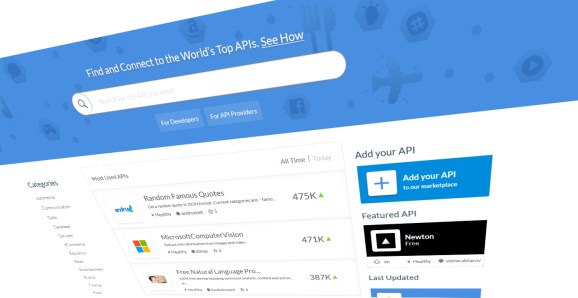 RapidAPI, a developer-focused marketplace for discovering and connecting with application programming interfaces (APIs), has raised $25 million in a series B round of funding led by Microsoft’s venture capital arm M12, with participation from Andreessen Horowitz, Green Bay Capital, and DNS Capital.

Founded in 2015, San Francisco-based RapidAPI connects developers with thousands of public APIs, covering everything from web search and weather to sports results and breaking news. Developers can manage all their API connections from a single RapidAPI interface.

With another $25 million in the bank, the company said that it plans to scale its API marketplace, and double down on a new product it has recently launched called RapidAPI for Teams — this is a self-serve platform for developers to publish, manage, and collaborate around internal APIs and microservices. RapidAPI for Teams launched for its enterprise customers with on-premise and private-cloud setups in early 2018, and from today it’s opening for any developer. It’s free to use for the first five developers, after which it will cost $10 per developer per month.

“Ten years ago, companies would develop software as a single monolith,” noted RapidAPI founder and CEO Iddo Gino. “With the shift to microservices, that monolith is deconstructed to hundreds of external APIs and dozens of internal APIs. We started RapidAPI to help developers better manage and consume external APIs, and now we enable them to share and collaborate on internal APIs too, allowing them to work with greater velocity and efficiency.”

There’s an API for that

The API management market is estimated to be worth around $1.2 billion today, a figure that’s projected to grow to $5.1 billion by 2023. Many of the major technology companies offer some kind of API management service, including Amazon, Google (powered in part by its Apigee acquisition), and Microsoft, which acquired Apiphany back in 2013. Indeed, Microsoft’s investment in RapidAPI, via its VC arm, is particularly notable, as it comes less than a year after it doled out $7.5 billion for code-hosting platform GitHub — Microsoft is clearly investing in the developer ecosystem.

“Responding to the torrid growth of the API economy, RapidAPI is changing the way businesses scale with APIs and microservices,” added M12 managing director Mony Hassid, who recently joined RapidAPI’s board of directors. “We are excited about the potential for RapidAPI to enhance developers’ productivity, streamline duplicative work, and assist to combine API contracts.”

RapidAPI had previously raised $12.5 million, including its $9 million series A round last March. In the intervening months, it said that it has expanded the number of APIs in its marketplace by 25% to 10,000, covering around a third of all publicly available APIs. It added that it has also doubled the number of developers using its platform to 1 million.