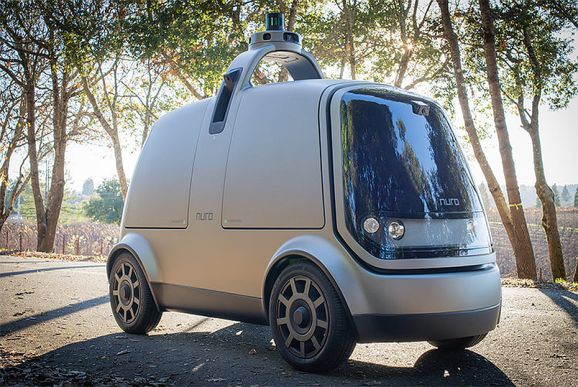 Nuro, a self-driving car company founded by two former Google employees, this morning announced that it’s teaming up with Domino’s Pizza to pilot delivery in select Texas markets. Nuro plans to start by ferrying pizzas from one of Domino’s corporate-owned stores by Q4 2019 via its custom R1 vehicle in Houston, where it has been serving Kroger customers since earlier this year.

Once an order is ready to be delivered from a participating location, Domino’s employees will load it into one of several compartments in Nuro’s thin, stout R1, which packs a proprietary combo of laser sensors, cameras, and computers. The vehicles top out at 25 miles per hour and are fully driverless, although they are for now escorted by human-driven cars.

Customers will be able to track the delivery through the Domino’s app and will be given a unique one-time PIN code, which they’ll use to verify their identity and retrieve their items. “The opportunity to bring our customers the choice of an unmanned delivery experience, and our operators an additional delivery solution during a busy store rush, is an important part of our autonomous vehicle testing,” said Domino’s executive vice president and chief information officer Kevin Vasconi in a statement.

Details were tough to come by at press time, but a Nuro spokesperson noted that Domino’s delivers 3 million pizzas per day globally — a market ripe for Nuro’s taking if all goes well. Domino’s dominates the $46 billion U.S. pizza market, according to PMQ Pizza magazine, with sales just shy of $6 billion in 2017, up 11% from 2016.

Nuro has competition in autonomous drone startup Starship Technologies, which in March 2017 inked a deal with the pizza chain to deliver pies in a handful of German and Dutch cities. But Nuro’s more direct rival is Ford, which revealed two years ago that it will test Michigan and Miami consumers’ reactions to having pizza delivered by self-driving vehicles.

Nuro’s pilot with Domino’s follows the launch of the aforementioned partnership with grocery giant Kroger in June, which saw a limited rollout in Scottsdale, Arizona ahead of the expansion to Houston. Nuro shared in March that it had fulfilled “thousands” of customers’ grocery orders to date.

Nuro was cofounded in 2016 by Ferguson and Jiajun Zhu, both veterans of the secretive Google self-driving car project that eventually spun out as Waymo. Mountain View, California-based Nuro has about 280 employees and 100 contract workers and has so far deployed six delivery vehicles. It plans to test as many as 100 cars on roads in California, Arizona, and Texas in the coming months.