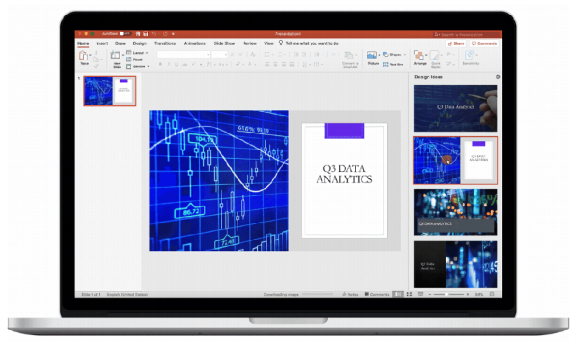 The world’s most popular presentation program — PowerPoint — is becoming more capable this week, courtesy of AI. Microsoft today announced that PowerPoint Designer, the cloud-powered recommendation service it launched in 2015 for Office 365 subscribers, will soon see new branding features targeting corporate customers, along with a pictorial theme library and a data interpreter that augments slides with illustrative comparisons. Also in tow is Presenter Coach, which provides practicing presenters guidance regarding pacing, tone, and more.

For the uninitiated, PowerPoint Designer surfaces styles, artwork, and complementary backgrounds by sussing out “compelling” portions of user-added text and images. Designer can take into account multiple images and transform them, apply effects to them, change their opacities, or isolate colors from them and apply particularly “impactful’ hues to existing slides. A facial recognition component identifies people in images to avoid cropping out their faces, and its SmartArt diagramming and icons suggestions tie in with handwritten ink.

Microsoft says that more than a billion slides have been created with Designer, as of April 2019 — up from 554 million in December 2018 and and 45 million  in February 2017. PowerPoint partner group program manager Shawn Villaron pointed out during a press conference call that, assuming the average PowerPoint user would have spent 30 seconds fine-tuning a slide, Designer has saved at least 500 million minutes to date.

“A few years ago, the PowerPoint team took a bet on artificial intelligence (AI) and started the PowerPoint Designer effort,” said Villaron. “We aspired to help our customers overcome some of the fear around building an effective slide by offering up suggested slide designs … “[N]ew Designer capabilities … suggest high-quality content to jumpstart authoring and [provide] perspective suggestions for quantitative content.”

To this end, PowerPoint’s new AI-powered Presenter Coach walks users slide-by-slide through presentations and provides real-time feedback on cadence, profanity, and phrases that might be considered culturally insensitive. It will alert presenters when they appear to be reading slides verbatim, and at the end of each rehearsal session it spits out a detailed report with metrics (like filler words used and their frequency, problematic slides, words per minute, and speed over time).

“From classrooms to boardrooms, our belief is that everyone can improve how they present,” said Villaron. “Training and feedback help people gain confidence and empower them to achieve their personal and professional goals. Over the last few years, we’ve received feedback from educators, students, and customers that people want an easy way to practice their presentations to improve their public speaking abilities.”

Presenter Coach in PowerPoint will be available in PowerPoint for the web later this summer, after which it will make its way to Windows, Mac, and mobile platforms.

“In today’s fast-paced work environments, people are pressed for time, and AI-powered features like Designer help people create visually engaging and immersive presentations with only a few clicks,” said Villaron. “Now, users can get this streamlined experience while working with their organizations’ templates, using branded layouts instead of needing to improvise.”

Designer for branded templates is available to Office 365 Insiders subscribers for Windows and Mac.

Above: Theme ideas supplied by PowerPoint.

PowerPoint’s next new feature is decidedly less business-to-business. Theme ideas in designer begins rolling out today on Windows, Mac, and the web for Office 365 subscribers and surfaces high-quality photos fully licensed for commercial use that reflect slide text, along with theme styles, complementary colors, and corresponding color palettes.

It dovetails with Designer’s integration with Microsoft Research’s Perspective Engine, which also rolls out today in English for Office 365 subscribers. Inspired by a comparable feature in Bing Search that launched last year and a growing body of literature suggesting people have trouble conceptualizing unfamiliar measurements, Designer can now recognize when a slide contains a large and difficult-to-visualize number (like 652,232 square kilometers — the size of Afghanistan) and automatically insert relative examples (e.g., “about equal to the size of Texas”).

Villaron says that Designer’s perspectives will eventually be localized to geography. For instance, a user in the U.S. would see distances in imperial units and currency in dollar equivalent, while a user in Spain would see metric units and euros.

Above: Designer perspectives in PowerPoint.