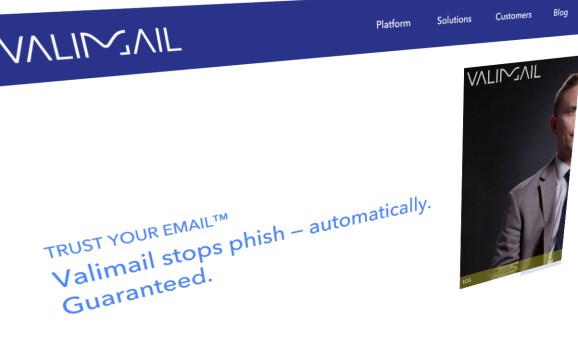 Anti-phishing startup Valimail has raised $45 million in a series C round of funding from Insight Partners.

Launched in 2016, Valimail has built an automated cloud-based platform that helps companies establish the authenticity of in-bound emails, as well as spotting outbound phishing attacks which is often referred to as BEC (“business email compromise”), where cyber criminals target a company’s customers with emails that appear to come from one of the company’s employees. The San Francisco-based startup, which has adopted email authentication protocols such as DMARC (“Domain-based Message Authentication, Reporting and Conformance”) as part of its efforts, has claimed some big-name clients, including Uber, Yelp, and WeWork.

“By delivering the world’s first fully automated, identity-based solution for protecting email, we are transforming the way the global enterprise thinks about email security,” said Valimail CEO and cofounder Alexander García-Tobar in a statement. “In short, we are delivering trust — we make enterprise email trustworthy, both for inbound and outbound messages.”

Prior to now, Valimail had raised around $39 million, and with another $45 million in the bank it plans to “accelerate the expansion” of its products, grow its partnerships, and expand globally.

Despite the rise in team-collaboration tools such as Slack and mobile messaging apps like WhatsApp, email continues to serve as a key mode of communication for consumers and companies alike. Some 4 billion users were estimated to have sent nearly 300 emails each day in 2018, a figure that’s set to grow in the coming years — email is going nowhere yet.

However, a rise in phishing attacks has opened the door for myriad startups looking to mitigate the risks posed by online fraudsters. Earlier this week, Ironscales announced it had raised $15 million to help thwart phishing attacks with AI, while last week Vade announced a whopping $79 million raise to protect email inboxes from phishing attempts, malware, and spam.

“Phishing and business email compromise attacks are on the rise around the world and the losses have mounted into the billions,” added Insight Partners VP Thomas Krane. “It’s clear that other email security technologies have not solved this urgent global problem. Valimail’s ‘trust layer’ represents a fundamentally better approach to solving this crisis of fake sender identities.”