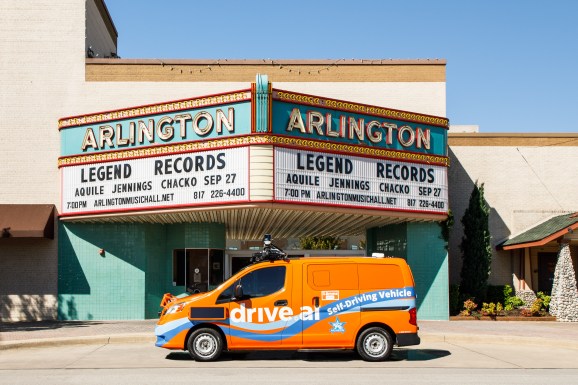 Self-driving car startup Drive.ai will cease all operations and lay off 90 employees, according to a June 12 filing with California’s Employment Development Department that was initially spotted by the San Francisco Chronicle. The news comes after reports that Apple was exploring an acquisition of Drive.ai to bolster the former’s secretive self-driving car project.

Drive.ai general counsel Thomas Yih wrote in the letter that the closure was necessitated “[by] events beyond Drive.ai’s control or current knowledge.” CEO Bijit Halder will be among those out of work when Drive.ai’s Mountain View office shutters on Friday, along with the company’s directors of finance and robotics.

Drive.ai declined to respond to VentureBeat’s request for comment.

In what might be retroactively interpreted as a sign of instability, Drive.ai cofounders Sameep Tandon and Tao Wang left the company in June and February, respectively, according to LinkedIn. Three weeks ago, five other Drive.ai employees — mostly data, systems, and software engineers — changed their LinkedIn profiles to say they left Drive.ai for Apple.

Drive.ai was at one time valued at $200 million, and it managed to raise nearly $80 million in four years from backers including New Enterprise Associates, GGV Capital, Northern Light Venture Capital, HOF Capital, Nvidia GPU Ventures, and others. Andrew Ng, formerly Baidu’s chief scientist and a researcher at Stanford, once sat on the company’s board of directors.

Drive.ai’s abrupt shutdown comes after it announced it would pull out of Frisco, Texas, one of its launch cities. At the time, it said it was because its contract with Frisco, where Drive.ai has operated a small fleet of autonomous Nissan NV200s shuttles on a single route between an office park and a high-end shopping complex, ended later in the month. (The City of Frisco opted not to renew it, citing high costs.)

Drive.ai’s shuttles — each of which was equipped with lidars, radars, GPS, cameras, and inertial measurement sensors that collected data about the outside world, along with onboard computers that interpreted incoming data in near-real time — ferried passengers on routes connecting the Dallas Cowboys stadium, an office park, a convention center, the Texas Rangers ballpark, and the University of Texas at Arlington. They featured screens that displayed symbols, emojis, and other visual cues to communicate their next course of action — a lane change or right turn on red, for example — to human drivers and pedestrians around them.

The vans operated with safety drivers aboard, but Drive.ai had planned to remove humans from the loop by the end of 2021.

Drive.ai’s service was paid for by the City of Arlington and the U.S. federal government and was originally slotted to run through October 2019, with an option to extend. The city requested that it end early, and a spokeswoman for the city told the Chronicle that Drive.ai’s vans dropped off their last passengers on May 31.

Updated 6:27 p.m. Pacific: Apple confirmed to Axios this evening that it acquired Drive.ai for an undisclosed price. A source tells the publication that the Cupertino company hired employees in engineering and product design, and that it additionally purchased Drive.ai’s autonomous cars and related assets.