“One thing we’ve consistently heard from you is that you want more control over what videos appear on your homepage and in Up Next suggestions. So we’re doing more to put you in the driver’s seat,” wrote YouTube product manager Essam El-Dardiry in a blog post. “We hope you’ll find that these new features help you navigate the incredible breadth of content available on YouTube and more easily find great videos to watch.”

Starting today on iOS and in the coming days on Android and desktop, you’ll see a breakout box underneath recommended videos explaining why they were surfaced. It’ll most often appear paired with content from channels you haven’t seen before, YouTube says, based on what other viewers with similar interests have liked and watched in the past. 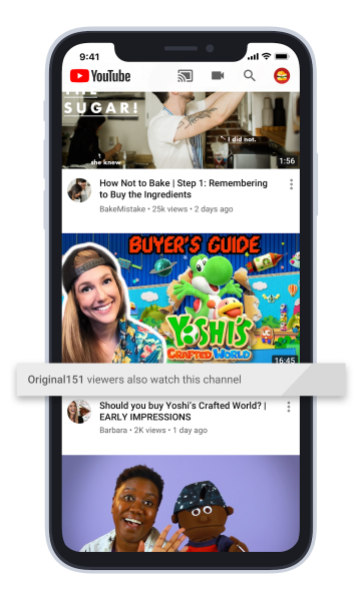 Above: New breakout boxes beneath recommended videos on YouTube.

In another small but noteworthy addition, YouTube is adding a shortcut to streamline the removal of video suggestions from channels you don’t watch. Tapping the three-dot menu next to a video in the YouTube app for Android and iOS today (and soon on desktop) will pull up a “Don’t recommend channel option,” which when clicked will prevent clips from that channel from populating your homepage (but not search results or the Trending tab).

“Our goal is to explain why these videos surface on your homepage in order to help you find videos from new channels you might like,” said El-Dardiry. “Although we try our best to suggest videos you’ll enjoy, we don’t always get it right, so we are giving you more controls for when we don’t.”

Additionally, YouTube says it has enhanced the topic and related videos flow with personalized suggestions. (It’ll be available for signed-in users in English on the YouTube app for Android and soon on iOS, desktop, and other languages, YouTube says.) When you scroll up on the homepage or browse in Up Next, you’ll now see options either related to the one you’re watching or from the channel you’re watching, or related to topics which might be of interest to you.

In an effort to address those and other concerns, the company earlier this month changed its community guidelines to ban videos promoting the superiority of any group as a justification for discrimination against others based on their age, gender, race, caste, religion, sexual orientation, or veteran status. YouTube also said it would expand its efforts to reduce the spread of harmful misinformation and content that attempts to skirt its policies, and said it would prevent channels from monetizing their content if they repeatedly violate the platform’s hate speech rules.

In tangentially related news, YouTube Music today launched Smart Downloads on Android, an evolution of its Offline Mixtape feature that automatically saves tracks from your Liked Songs playlist and your other favorite playlists and albums for offline. It’ll download up to 500 songs (or fewer, if you so choose) at night over Wi-Fi.