Google is introducing a new predictive feature to Google Maps, one that tells travelers how busy their bus, train, or subway ride will likely be.

The company announced today that it will be rolling out “crowdedness predictions” in around 200 cities globally — this means that if you request a transit route between two destinations, you may see something like “usually standing room only.”

According to this screenshot, the data is based on crowdsourced ratings from other Google Maps users. 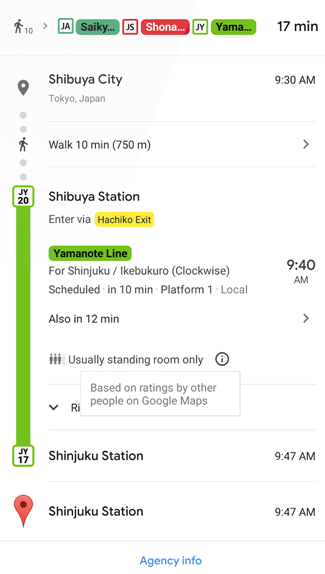 The feature is the culmination of a question that has been cropping up for Google Maps users around the world over the past year. Indeed, reports surfaced from users in a number of cities globally, including New York, Tokyo, the Bay Area, and Paris, after Google Maps prompted users to answer a question after traveling on public transport, such as: “How crowded was the subway when you got on at Georgia Ave-Petworth Station?” followed by a bunch of options such as “many empty seats” or “cramped standing room.”

Google has introduced similar predictive features in the past that leverage data passively from Android devices that have “location history” enabled on their phones. For example, Google Maps can predict how busy the parking will be at your destination, while Google Search can help you avoid lines by showing the busiest times at millions of places. But this crowd prediction feature is based entirely on active feedback solicited from users during peak commuting hours.

The feature will be landing in major cities across the U.S., Canada, Europe, Australia, Japan, India, Mexico, Brazil, Argentina, and other key markets starting from today. It will be available on both Android and iOS devices.

In another Maps update, Google is also introducing live traffic delays for buses, so that those traveling on public transport will always have up-to-date information on where their bus is and how soon it is likely to arrive based on traffic conditions.

While some cities already offer real-time scheduling for buses that take into account live traffic, this relies on data provided directly from local transit agencies. In locations where Google doesn’t have such data integrations, this latest rollout will go some way toward plugging that gap — it will presumably leverage similar traffic data to what it uses to provide drivers with real-time journey information.