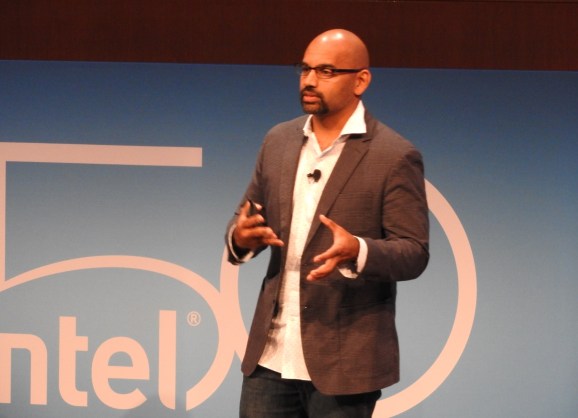 At Baidu’s Create conference in Beijing this week, Intel corporate vice president Naveen Rao announced that Baidu is collaborating with Intel on the development of the latter’s Nervana Neural Network Processor for training, also known as NNP-T 1000 (previously NNP-L 1000). The two companies will combine their expertise to develop high-speed accelerator hardware capable of training AI models quickly and power-efficiently.

Intel describes the 16nm NNP-T, code-named “Spring Crest,” as a “new class” of AI model hardware designed to “accelerate distributed training at scale.” It’s optimized for image recognition and has an architecture distinct from other chips in that it lacks a standard cache hierarchy and its on-chip memory is managed directly by software. Intel claims the NNP-T’s 24 compute clusters, 32GB of HBM2 stacks, and local SRAM enable it to deliver up to 10 times the AI training performance of competing graphics cards and 3-4 times the performance of Lake Crest, the company’s first NNP chip.

Furthermore, the NNP-T is able to distribute neural network parameters across multiple chips thanks to its high-speed on- and off-chip interconnects, allowing it to achieve very high parallelism. It additionally uses a new numeric format — BFloat16 — that can boost the sort of scalar computations central to inferencing tasks, enabling the NNP-T to accommodate large machine learning models while maintaining “industry-leading” power efficiency.

The NNP-T is expected to ship later this year alongside the 10nm Nervana Neural Network Processor for inference (NNP-I), an AI inferencing chip that packs general-purpose processor cores based on Intel’s Ice Lake architecture.

“The next few years will see an explosion in the complexity of AI models and the need for massive deep learning compute at scale,” said Rao. “Intel and Baidu are focusing their decade-long collaboration on building radical new hardware, codesigned with enabling software, that will evolve with this new reality – something we call ‘AI 2.0.'”

It’s not the first time Intel and Baidu have teamed up to develop solutions targeting AI applications. Since 2016, Intel has been optimizing Baidu’s PaddlePaddle deep learning framework — which the NNP-T will support — for its Xeon Scalable processors, and the companies are working together on MesaTEE, a memory-safe function-as-a-service (FaaS) computing framework based on the Intel’s Software Guard Extensions (SGX) technology.

More recently, Baidu and Intel took the wraps off of BIE-AI-Box, a hardware kit custom built for analyzing the frames captured by cockpit cameras. To this end, it incorporates BIE technologies “specially” engineered for the purpose, and connects with cameras for road recognition, car body monitoring, driver behavior recognition, and other tasks.

The future of Intel is AI. Its books imply as much. The Santa Clara company’s AI chip segments notched $1 billion in revenue last year, and Intel expects the market opportunity to grow 30% annually from $2.5 billion in 2017 to $10 billion by 2022. Putting this into perspective, its data-centric revenues now constitute around half of all business across all divisions, up from around a third five years ago.

As for Baidu, it’s looking to the over $400 billion cloud computing market for growth. It recently partnered with Nvidia to bring the chipmaker’s Volta graphics platform to Baidu Cloud, and in July 2018, it unveiled two new chips for AI workloads: the Kunlun 818-300 for machine learning model training and the Kunlun 818-100 for inference.