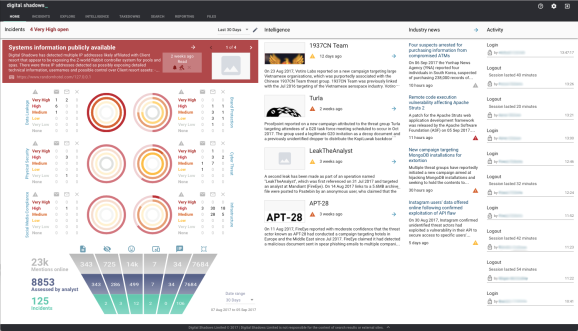 Digital Shadows, a provider of managed solutions that help identify and mitigate corporate digital risks, this morning revealed that it has raised $10 million in strategic series C funding led by National Australia Bank (NAB). Existing investors including Octopus Ventures contributed to the round, which brings the U.K.-based startup’s total raised to nearly $60 million following a $26 million series C in September 2017.

CEO Alastair Paterson said the funds will accelerate Digital Shadows’ global expansion from “hundreds” of customers to thousands, as well as support an expanded Asia Pacific team to enable 24/7 security threat coverage for the first time in the company’s history.

“Demand for digital risk protection continues to flourish with significant growth in the Asia Pacific market. It’s clear that partnership with a regional specialist in NAB Ventures is exactly what is needed to drive further growth in this massive market and to expand the delivery of our SearchLight service to customers around the world,” said Paterson, a former Detica principal consultant who partnered with chief innovation officer James Chappell in 2011 to found Digital Shadows. “We’re very pleased that our existing investors feel the same and have joined us on this next stage of our journey.”

Digital Shadows — which competes with Recorded Future, a Boston-based threat intelligence service acquired by Insight Partners for $780 million in May, and Flashpoint, a New York-based company that recently nabbed $28 million for its risk intelligence platform — offers a suite that protects companies against threats by sussing out inadvertently published data.

Digital Shadows’ SearchLight service has clients register their document-marking systems, email headers, subsidiaries, employees, keywords, and intellectual property, and it continuously monitors over 100 million web data sources in more than 27 languages for matches. When it spots them (using a combination of search engines, APIs, and custom crawlers), managers receive alerts that include remediation suggestions, along with shortcuts to launch takedowns directly within SearchLight’s web-based portal.

As for Digital Shadows’ Shadow Search, it allows customers to quickly surface threat information from a curated set of published and shared material, or to research mentions of third-party products, brands, and other “observables.” It’s a largely autonomous affair on the backend, but Digital Shadows retains a team of human analysts charged with filtering and vetting info to eliminate false positives.

Digital Shadows says that for one financial institution, it managed to find a folder of over 3,000 documents that included its ATM network’s designs. For another — a West Coast tech firm — it detected database admin passwords that had been shared online on a coding site.