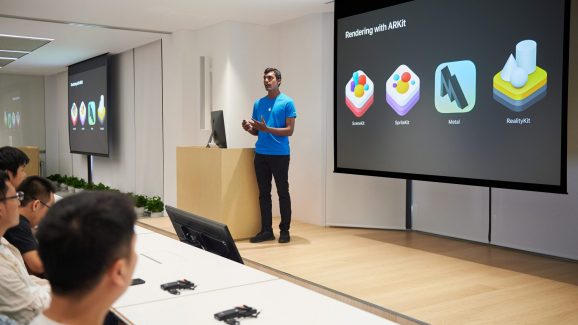 As Apple increasingly relies on services revenue to grow its profits, its easiest route to sharing in 30% of recurring App Store revenues is to help third-party developers win more subscribers for their apps. To that end, Apple has announced the opening of its first app development accelerator in Shanghai, China, offering developers the opportunity to “take their apps to the next level” with direct assistance from Apple personnel.

Historically, a huge number of Chinese developers — over 2.5 million, by Apple’s estimate — have churned out apps for the App Store, but these often struggle to achieve popularity outside of China. Apple expects to assist accelerator participants in designing, distributing, and marketing their apps for global rather than just local appeal, as well as spotlighting its newest and most important technologies within the country.

The Design and Development Accelerator has already started to teach Chinese developers about the potential of augmented reality apps, spurring interest as it plans to move from iPhone- and iPad-reliant AR displays into dedicated AR glasses. Apple also expects to assist development efforts in areas ranging from education to health and entertainment, where China’s developers are already regionally successful.

Over time, the company will offer training across all five of its operating systems — iOS, iPadOS, watchOS, macOS, and tvOS — by offering lectures, workshops, and labs at the Pudong District facility. It will also host networking opportunities for mainland China developers, who Apple notes have generated $29 billion in app revenues over the past nine years, with over $8.7 billion in just the last year — a reported 40% of all consumer spending on apps last year, and nearly 50% of all app downloads, according to an App Annie study in January.