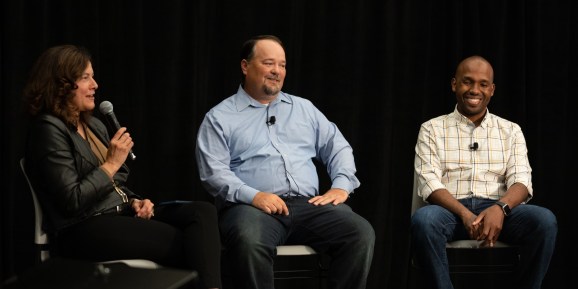 Forecasting demand for products used to take Walmart weeks. Now, with the help of Nvidia, this key component of supply chain management can be completed in a matter of hours.

Walmart is among the first companies to work with Nvidia’s open source Rapids software, which allows the retail company to more easily churn data through GPUs that run at many times the speed of traditional CPUs.

Rapids enables Walmart to run the software it already uses on GPUs, rather than requiring the company to use Nvidia’s programming platform CUDA.

“The whole goal of Rapids is really to change nothing, just to make it really easy to use, and leverage all the speed and power of the GPU,” Nvidia general manager of data science Josh Patterson said at Transform 2019.

Walmart chief data officer Bill Groves said the software has opened up new possibilities. Because it can now rely more on the faster computing of GPUs, for example, Walmart is able to use computer vision in previously prohibitive situations. This means the company can get more from data it’s already gathering — from sources such as the Bossa Nova robots that scan merchandise in the aisles of a growing number of Walmart stores.

Rapids and the expanded use of GPUs mean Walmart will also be able to better account for one-off bursts of interest in specific products, said a spokesperson. For example, when Elmer’s Glue suddenly surges in popularity at an unexpected time of year because kids are making slime, Walmart can now account for the trend and ensure glue is on the shelves.

It also means Walmart can better leverage data collected by handheld devices its personal shoppers use and help those employees work more efficiently. Additionally, Walmart can ensure there’s sufficient merchandise on shelves for both personal shoppers and customers shopping in person for themselves, the spokesperson said.

Just as important, the expanded capacity to use data means the company can more quickly and easily keep products customers don’t want off the shelves. Data isn’t collected just from store shelves, but throughout the supply chain and away from the eyes of customers.

“These are problems we can solve today that we couldn’t have three months ago, six months ago, two years ago,” said Groves.