As people get older, key questions around living arrangements inevitably arise — should they move to a multi-residence retirement home, or perhaps move in with family? But a survey by the American Association of Retired Persons (AARP) indicates that 87% of adults aged 65+ would prefer to “age in place,” that is, live in their own home and community independently, regardless of their age, income, or abilities.

Against this backdrop, Umbrella is setting out to help homeowners in their later years connect with others in their neighborhood through a membership-based marketplace.

A bit like a “TaskRabbit for seniors,” Umbrella invites local community members to sign up and offer their services — anything from moving boxes to shoveling snow, changing light bulbs, painting fences, raking leaves, or cleaning houses. These community members are what Umbrella refer to as “neighbors,” and they don’t work for free — jobs are typically charged at $20 per hour, though neighbors concede a $4 cut to Umbrella. Neighbors can also elect to receive less money, with the difference going toward discounted work for lower-income seniors in the neighborhood.

“Our Members use Umbrella to maintain their independence and stay connected to their communities — whether that means some help around the house or meeting others in the area,” said Ullman. “We are the easiest way for older adults to continue to live in the homes they love, rather than the traditional alternative of ‘senior living.'”

The neighbor-focused app lets workers search for open jobs, track jobs they’ve accepted, and edit their profile, while a community “neighbor leaderboard” throws a little competition into the mix. 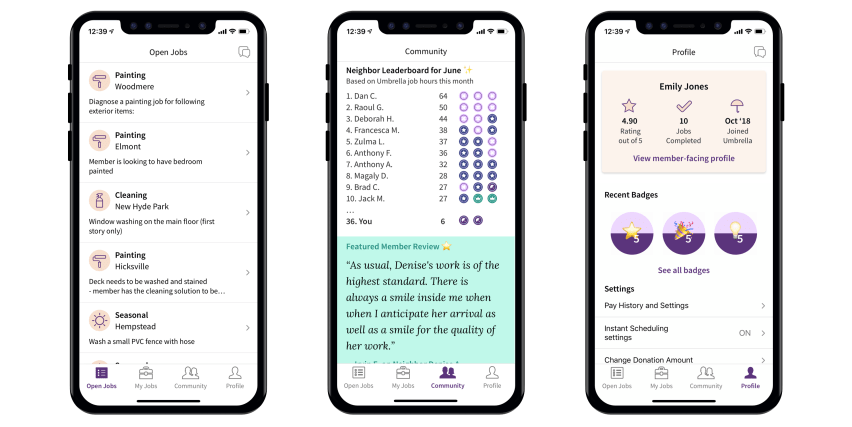 The members’ app allows individuals to book a new job and search for neighbors and professionals by job type. 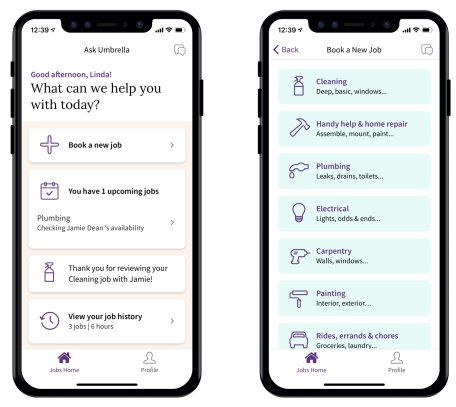 Umbrella interviews and vets the “neighbors,” including checking their backgrounds and references. For more complex jobs, Umbrella provides access to a pool of licensed professionals — from electricians to engineers — who charge what the company calls “a fair price.”

There are other platforms designed to help people find assistance or someone to work odd jobs around the house. But Umbrella has been specifically set up to promote and nurture a community spirit — having someone who lives nearby paint the fence or mow the lawn has the potential to create social connections. According to the company, more than half of Umbrella’s neighbors are also recent retirees themselves.

Umbrella fits into a micro trend of companies focused on growing and harnessing “the community,” with the likes of Neighborhood social network Nextdoor recently raising $123 million at a $2.1 billion valuation and Amazon last year launching its Neighbors app to help communities report crimes.

Though seniors represent a potentially huge market, they have been largely ignored by tech investors — but that could be changing. More than 40% of seniors (65+) in the U.S. now own a smartphone, compared to just 13% in 2013. Moreover, this demographic often has significant resources to spend on internet-based services, which is what could make startups like Umbrella viable and — crucially — more attractive to investors.

“Umbrella is building the leading consumer brand for older adults, an audience that has the largest spending power in the country and yet paradoxically is often ignored by companies building new products,” said Thrive Capital general partner Jared Weinstein.

It’s worth noting that Thrive Capital has previously invested in another elderly-focused startup, called Honor, which provides on-demand care to the elderly in their homes. Last year, Honor raised another $50 million, taking its total funding to $115 million.

Although Google’s sister company Sidewalk Labs has hogged headlines for its ambitious plans to turn Toronto’s waterfront into a mini smart city, the Alphabet subsidiary has made a number of direct investments in startups over the past couple of years. These include Sidewalk Labs graduate Cityblock Health, which is setting out to help low-income Americans — including the elderly — access health care.

“Umbrella represents the kind of local inter-generational communities that we believe in at Sidewalk Labs,” Sidewalk CEO and chair Dan Doctoroff told VentureBeat. “By creating a new kind of community infrastructure that supports aging in place, we can create a new standard for living purposefully as you age. When Lindsay and Sam told me they were leaving Sidewalk to pursue Umbrella, it was obvious that we wanted to be a part of it.”

Umbrella currently serves New Jersey and Long Island, though with its fresh cash injection it plans to expand the service nationwide this year. And although there are no imminent plans for international markets, Umbrella said it has garnered interest from Canada, Australia, and the U.K.