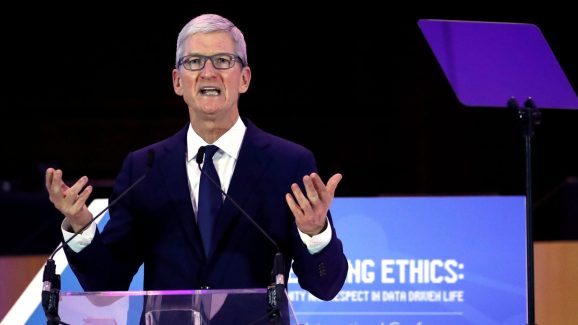 Apple is undeniably one of the technology industry’s most public advocates for user privacy, but behind the scenes, the company’s efforts aren’t necessarily as aligned with users’ interests as its marketing might suggest. A new Washington Post report today says that while Apple has repeatedly called for a comprehensive federal privacy law, it has simultaneously undermined efforts to pass state privacy laws — a typical first step in giving Congress options to choose from before passing national legislation.

On a positive note, the Post notes that Apple CEO Tim Cook has been personally engaged in the company’s lobbying efforts, speaking directly to federal legislators while pushing them to support privacy protections. The company has also explicitly called for a U.S. bill similar to Europe’s General Data Protection Regulation, and arguably has done more than any other company to raise public awareness of privacy issues wrought by unmonitored data sharing by rivals.

But Apple’s push for a massive omnibus federal law hasn’t had teeth, the report notes. Unlike competitors such as Microsoft, it hasn’t formally backed any federal privacy bills that have been proposed, nor has it supported Congressional efforts to address individual privacy issues, such as blocking companies from tricking users into handing over personal information during service sign-ups. Typically, it stands on the sidelines rather than taking any active role in moving legislation forward. A spokesperson says, however, that Apple has “offered to help write the [national privacy] legislation and reiterate[s] this offer.”

A bigger issue, the Post suggests, is that Apple has actively and passively opposed state-level legislative privacy efforts — acting as an “ally in name only,” according to state legislators, while funding trade groups such as TechNet and CompTIA that have opposed state privacy regulations. The company backed groups that worked against California, Illinois, and Washington privacy laws, and hasn’t signed on to support state-level protections. Apple also worked to soften a right-to-sue provision in California’s landmark privacy bill, limiting its exposure in cases of consumer data leaks, and weakened legislation that might have protected HomePod users from abuses by third-party developers.

Users can debate whether Apple’s position on privacy indeed represents its heartfelt interest in a single, comprehensive national framework, or instead is a cynical effort to resist regulation by stifling state-level laws before they grow. In any case, representatives from Apple and its peers are expected to testify before Congress tomorrow in a hearing on potential antitrust regulations on tech companies, where data privacy will likely be just one of multiple issues on the table.