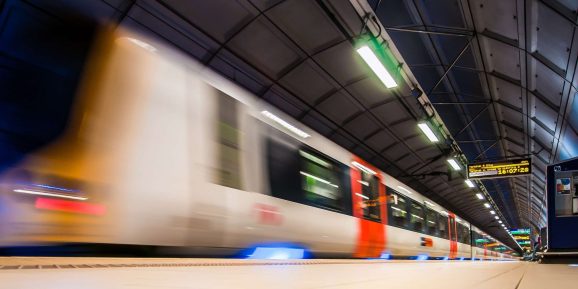 Subways are fertile ground for sci-fi movies, serving as perfect backdrops for the mass adoption of futuristic technologies. Now the United Kingdom and South Korea are preparing to turn subway science fiction into fact, using 5G cellular technology to bring augmented and mixed reality content into their metro systems, with the potential to expand to New York thereafter.

Initially, the £2.4 million ($3 million) project with the 5G RailNext consortium will determine 5G’s ability to provide continuous AR and MR content to both commuters and tourists. Starting next month and running through March 2021, each country’s government will provide £1.2 million (roughly $1.5 million) to fund demonstrations of new interactive travel, entertainment, and advertising experiences using 5G alongside wearable devices such as headsets.

The governments appear to see revenue-generating potential in equipping their subways with high-speed, low-latency cellular hardware. They expect that passengers will be able to access travel information, stream videos, and play games through mixed reality headsets — with “world-class British advertising” potentially playing a role in bringing services to commuters.

While 5G RailNext will start with trials in Seoul’s modern metro system, it will quickly move on to demonstrations on the Glasgow Metro — one of the world’s oldest subway systems. The new-to-old shift is being framed as a deliberately “challenging and relatable environment” for the new cellular technology, which can under some conditions struggle with both range and physical signal attenuation. The project’s goal is to leverage each stage of learning to help deployment of 5G and AR/MR services in additional subways, including the London Underground and New York Metro.

Like the agriculture-focused project 5G RuralFirst, 5G RailNext is a Cisco-led consortium of public- and private-sector organizations, including the University of Strathclyde, Glasgow City Council, and a number of British small and medium-sized businesses. The 5G/AR/MR project is intended to maintain a collaborative relationship between the South Korean and U.K. governments following the latter’s planned exit from the European Union.